5 Markers To Be Celebrated Sunday 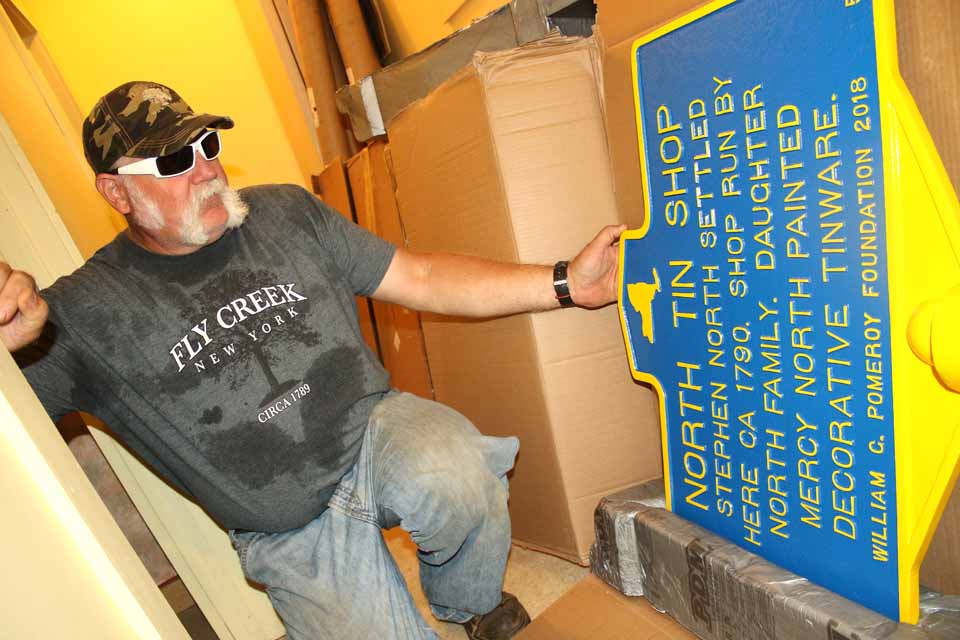 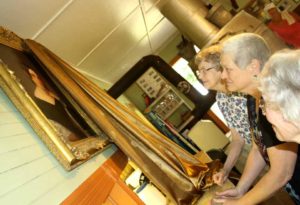 Mike Ainslie of Fly Creek starts unboxing the North Tin Shop, one of five new historical markers that will be on display tomorrow (Sunday, July 14) from mid-morning to mid-afternoon at the Fly Creek Historical Society’s annual BBQ at the old Grange Hall on Cemetery Road.  At noon, the society will also unveil a portrait of Diantha Cushman, being examine in photo at right by society stalwarts Deecee Haviland, Judy Thorne and Freida Snyder.  The portrait was painted by J.W. Jarvis, which Society President Sherilee Rathbone says may be a son of John Wesley Jarvis, who painted the James Fenimore Cooper portrait on display at The Fenimore Art Museum.  In 1846, Mrs. Cushman, daughter of mill owners in the Town of Exeter, married Charles Cushman, who operates the Oaksville Calico Mill.   In addition to the tin shop, the other four historical markers will mark sites of the one-room Sprague School house in the Fly Creek Valley; the nearby home of Hezekah Sprague, a Revolutionary soldier who donated the school house, and the pitch fork factory on Fork Shop Road.  Another marker, commemorating David Shipman, partial inspiration for Cooper’s Leatherstocking, is on order and will be placed by Shipman’s grave in a Toddsville Cemetery.  The markers were underwritten by the Pomeroy Foundation of Syracuse.  Tomorrow’s celebration include a pulled-pork luncheon (suggested donation, $10), which includes salad, dessert and a drink, as well as hotdogs and hamburgers.  (Jim Kevlin/AllOTSEGO.com)

What A Woman! What A Country!

Maybe it’s a part of “old-timers’ disease,” as the pun has it.I mean repeating myself. My poor wife puts up with a lot of it – and it’s partially the fault of my columns.

In them I’ve recorded lots of my life’s last 25 years, most of them spent in Anne’s great company. And further, I’ve also drawn into them life recollections from 20, 40 and 60 years ago.

I’ve shaped all those stories pretty tightly, and that makes them easy for me to recall, easy to spin out across someone’s coffee table or over dessert at a dinner party. Poor Anne! She’s heard all the tales by now and must sigh sometimes resignedly. Bless her patient spirit.

I really try not to repeat myself – at least (Anne excepted) before the same audience. But I’m going to do it now, deliberately. I’m going to retell a story I told you, over a hundred columns ago. There’s good reason for doing it. For, in these times, the story has a new, special resonance. I hope you’ll agree:

At a meeting of the Fly Creek Area Historical Society, Dick Smith of Albany came back home here to speak about the early history of recorded sound. A fine informal lecturer, Dick talked about everything from the mechanics of the first talking machines to fierce warfare among early recording companies.

Dick illustrated his talk with machines and recordings from his own collection. Some of his recordings are 100 years old – the age of the Grange Hall in which we’d gathered. We sat in the old building, listening to a thin voice that had been shouted into a pasteboard cone a century before. The singer was long dead, all but forgotten. Maybe that’s why his reedy voice moved us. We leaned forward to hear it.
But we were to be moved still more. For among Dick’s last selections was something that brought lumps to throats of all of us who’d been alive during World War II.

Record technology had advanced greatly by the ’40s; and now a rich, full voice, backed by a full orchestra, filled the old room. That voice, and the song it sang, swept us back 60 years. Then, the song was almost a second national anthem. The woman who made it so, said Dick, once sang it 60 times in a single weekend—during a marathon war-bond drive.

And that voice! Who’d heard its match for blending force with vibrant human warmth? It belonged to a large woman with a soul to match her size. When she sang that song, she made it embody national confidence, optimism, strength.

The song was “God Bless America.” The singer, of course, was Kate Smith. When she sang that anthem, she was our Mother Courage. Why, it was as if the Statue of Liberty had burst into song.

That night at the Grange Hall, the audience didn’t just listen to Kate. It sang along, softly, voices were full of memories, and a kind of reverence. At the end of the last stanza, we let our voices slowly descend the final three notes – mi, re, doh: “home sweet home.”

Kate’s voice didn’t drop; we knew it wouldn’t. Through our own quiet voices, we heard hers rocket up an octave on “sweet,” pause for an instant. Then, on “home,” her voice burst above us like a fireworks chrysanthemum shell. It spangled the dark sky, hung there.

“What a song!” we said to ourselves. “What a woman! What a country!”

The markers will be for Cattown Road, Panther Mountain, Goose Street, Honey Joe Road and Bed Bug Hill, and will be dedicated at the historical society’s annual BBQ celebration July 15.

END_OF_DOCUMENT_TOKEN_TO_BE_REPLACED

HAPPENIN’ OTSEGO for SUNDAY, MAY 6

HAPPENIN’ OTSEGO for SUNDAY, MAY 6

END_OF_DOCUMENT_TOKEN_TO_BE_REPLACED

Ward, known as Jim, was the son of the late Dorothy (Sheridan) and Ward C. Fish, Sr. of Richfield Springs. Jim was born on the family farm on March 7, 1938.

He met his “huggy bear,” Merri Lynn (Macomber) at the roller skating rink in  Richfield Springs. They were married in August 1959 in St. Mary’s Episcopal Church, Springfield Center.

END_OF_DOCUMENT_TOKEN_TO_BE_REPLACED

She was born April 12, 1919 at the former Thanksgiving Hospital in Cooperstown.  Catherine graduated from Cooperstown High School, Class of 1936, as well as Maryville College in Tennessee.

END_OF_DOCUMENT_TOKEN_TO_BE_REPLACED

‘The Heart Of Addiction’

END_OF_DOCUMENT_TOKEN_TO_BE_REPLACED

INFORMATION SESSION – 5-7 p.m. For individuals with developmental disabilities and their families looking to have more choice in their support and services, Cynthia Spann and Vanessa Smith present about Self-Direction. The Arc Otsego, 35 Academy St., Oneonta. Info/register, Marty Kuhn, (607)267-3210 or email kuhnm@arcotsego.org or visit www.facebook.com/arcotsego/