Trump rebukes Fauci's assessment: 'We are in a good place'

Covid-19 testing: A spike in demand, a delay on results

Trump says he will pressure governors over school reopenings

Analysis: The truth about Trump's call to reopen schools

Why this area may seal Trump's 2020 fate

Trump's niece in damning book: He paid someone to take his SAT

Gwen Stefani, Gavin Rossdale's son Zuma, 11, broke both arms within weeks of each other: He's 'the toughest'

Pence on Trump administration's push to reopen schools: 'We can't let our kids fall behind academically'

FLY CREEK – It is with deep sorrow and much love that we mourn the passing of Emma Jean (Shaw) Shepard of Cooperstown on July 1, 2020, at the age of 91 years.

END_OF_DOCUMENT_TOKEN_TO_BE_REPLACED

FLY CREEK – Sharon Ann Congelli, 74, who most recently lived with her daughter in Fly Creek, passed away Sunday, May 17, 2020, following a valiant seven-year battle with glioblastoma. She was 74.

Born Nov. 20, 1945, in North Hornell, Sharon was the daughter of Duane E. and Carol J. (Bricks) Knapp of Atlanta. After graduating from high school in Wayland she attended the Continental School of Beauty in Rochester.

While she was employed at several places throughout her life, she was best known as the manager of the Home Video store located in the Wayland Food Mart, for over 25 years. Prior to managing the video store, Sharon worked for the Wayland Central School as part of the high school cafeteria staff, a position she enjoyed and from which lifelong friendships were born as evidenced by monthly lunch gatherings with the “cafeteria ladies” held for decades after.

END_OF_DOCUMENT_TOKEN_TO_BE_REPLACED 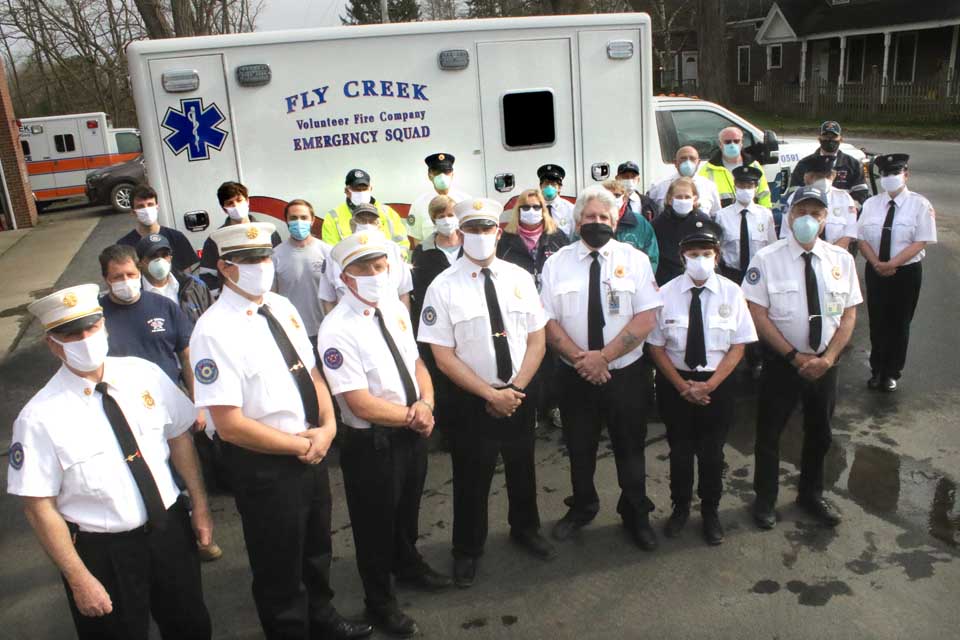 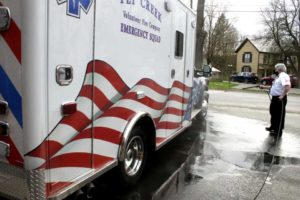 Among ruminations that “we’ve come a long way in 12 years,” the Fly Creek Volunteer Fire Company’s Emergency Squad gathered to welcome a brand new Horton Ambulance as it arrived at the station at 5 p.m. today.  Officers posing with the squad’s pride and joy are, from left, Fire Chief Chris Voulo, 1st Assistant Jess Lanza, Second Assistants Henry Hight and Adam Kantor, Squad Capt. Rick Kelly, and Fire Police Capt. John Phillips, joined by other EMTs and volunteers.  Inset, Kelly helps wash down the new vehicle, which replaces a second-hand one bought a dozen years ago from Alabama.   “It served us well,” Kelly said, but “we thought Fly Creek deserves the best.”  The ambulance includes a power-load system for stretchers, four-wheel drive, state of the art controls and LED lights.  (Jim Kevlin /AllOTSEGO.com)

POEM TO THE EDITOR from TOM HEITZ, SHARON STUART

FLY CREEK – With many of her fellow Fly Creek United Methodist Church quilters stuck inside under COVID-19 precautions, Pastor Sharon Rankins-Burd has found a way to keep sewing – and help the community.

“We became aware that there was a need at Bassett Hospital for masks,” she said. “Someone found a pattern online, and apparently, a lot of people are making these.”

While the masks are not full protection against COVID-19, they will help health care workers at Bassett reduce the risk.

END_OF_DOCUMENT_TOKEN_TO_BE_REPLACED

KUZMINSKI: Can Only Small Business Save ‘Common’ For All?

Can Only Small Business

Save ‘Common’ For All?

One of the landmarks of the early environmental movement was the essay, “The Tragedy of the Commons,” published in 1968 by the ecologist Garrett Hardin in Science. It can be to an individual’s private advantage, he points out, to exploit common resources at the expense of others.

In the absence of other constr

aints, he argued, most people will take more than their share, out of greed or fear, eventually depleting the resources in question.

By the same token, those who don’t take advantage for themselves end up with less.

In a later essay, “Living on a Lifeboat,” he elaborates further: “Under a system of private property the man (or group of men) who own property recognize their responsibility to care for it, for if they don’t they will eventually suffer.

“A farmer, for instance, if he is intelligent, will allow no more cattle in a pasture than its carrying capacity justifies. If he overloads the pasture, weeds take over, erosion sets in, and the owner loses in the long run.

“But if a pasture is run as a commons, open to all, the right of each to use it is not matched by an operational responsibility to take care of it. It is no use asking independent herdsmen in a commons to act responsibly, for they dare not.

“The considerate herdsman who refrains from overloading the commons suffers more than a selfish one who says his needs are greater.”

Hardin highlights the disconnect in an open, unregulated commons between “operational responsibility” and the preservation of common resources. He insists that “idealism” – some form of restraint and self-sacrifice for the greater good –doesn’t help in this situation.

The only way to guarantee “operational responsibility,” Hardin argues, is if your survival depends on your owning and maintaining the resources you need. This means not just owning some personal possessions, but owning, as your private property, a productive enterprise providing goods and services on which your living depends. It means being in business for yourself.

You might be a simple herdsman, as Hardin pictures it, or a farmer, or any other independent business person. But you have to be small enough so that the success or failure of the enterprise hinge on the decisions you make.

There was a time in American history, before the rise of corporations after the Civil War, when the vast majority of people were small independent business owners of the type Hardin describes. Most were farmers, but there were also artisans, tradesmen, manufacturers, shopkeepers, wholesalers, teamsters, ship owners, undertakers, lawyers, doctors and many others.

These small independent business owners were the heart of the pre-corporate economy. They were obliged by circumstances to ensure the preservation of the raw materials they needed to continue in business.

In what was still a low tech, agricultural society, this meant having to follow a natural ecological way of life, which put limits on despoiling the land, water, and air.

It wasn’t all good, of course – forests were clear cut by farmers, paper mills and tanneries polluted streams, wood and coal fires polluted the air, etc. – but it remained largely within the power of small independent producers to change their behavior under such circumstances.

Today, however, independent business owners comprise a small and declining – even endangered – part of the population. Most of the economic ownership, once widely distributed, has been steadily consolidated into fewer and fewer hands – mostly in large corporations.

Surviving as a small business is no easy task in the competitive digital era either. There is so much competition online that standing out from the crowd has never been more important. That being said, on the Internet, there is room for everyone, so in order to thrive, small businesses need a professional and impressive website.

Nonetheless, an eye-catching website alone is not quite enough to succeed. To get ahead of the competition, small businesses, therefore, need to make sure that their website is quick to load and does not suffer the consequences of a large amount of downtime.

One way small businesses can boost their online presence is by utilizing the services of a high-quality website hosting service such as Bluehost. To learn more about Bluehost, read the full review on makeawebsitehub.com.

In addition, the vast majority of people today are wage laborers, working for somebody else. They are not “operationally responsible” for the success of the enterprises that employ them.

No wonder most people feel powerless in the face of the political and economic problems we face today: They have been relieved of any effective “operational responsibility.”

Hardin drew a simple picture of herdsmen using a pasture, but we can imagine as well the large corporations roaming the earth and consuming its resources as if it were one big pasture. In an increasingly deregulated world, there is no effective check on corporate behavior.

This is the tragedy of the commons writ large. Each corporation, bound by the profit motive, has no choice but to act selfishly to maximize its private advantage in exploiting whatever resources it can command. Otherwise, it will be overtaken and consumed by the competition.

The personal survival of those running corporations – CEOs, top executives, and boards of directors – no longer depends on the survival of the corporation. They can skim off short-term profits and make money from inflated salaries, stock buy-backs, golden parachutes, and even bankruptcy.

Corporations are not too big to fail, but if they fail, it is the rank and file wage-earners who suffer, not the executives.

We’re not going back anytime soon to a non-corporate, decentralized, re-personalized, re-localized model of independently owned and run businesses. Yet, if Hardin is right, that may be the only way in the long run to achieve a sustainable society, one in which we preserve rather than destroy the resources we’ve been given.

We appreciate this paper’s coverage of local dissent from the global United Methodist Church’s “Traditional Plan” which passed by a slim majority at the church’s conference in February of this year.

To those not acquainted with the issue, the Traditional Plan continues the UMC Book of Discipline’s codified discrimination of people identifying as LGBTQ.   Those so identifying are not turned away from church, but they are denied full benefits of membership.

The implied message to LGBTQ people by this decision is that there is something wrong with them, that they are just not worthy.

END_OF_DOCUMENT_TOKEN_TO_BE_REPLACED

FLY CREEK – Some members of the Fly Creek United Methodist Church have allied with their Oneonta colleagues, penning a letter expressing “disappointment and dismay” that the international church has affirmed bans on gay pastors and gay marriage.

But the pastor, the Rev. Sharon Rankins-Burd, did not sign it, and Huntsman said it is not the Fly Creek congregation’s official position.

END_OF_DOCUMENT_TOKEN_TO_BE_REPLACED

FLY CREEK – Sarah (Sally) Van Horne Rezen, 95, a Marine, farmer with her husband Paul and antiques restorer whose family has lived in the Fly Creek Valley for 200 years, passed away on April 2, 2019, at Walden Place in Cortland.

Sally was born on Dec. 13, 1923, the daughter of Dorr and Emma Van Horne. She was the sixth of seven girls and grew up on the family farm in Fly Creek Valley.

Sally went to a one-room schoolhouse at the Sprague School through 8th grade. She attended Cooperstown High School, graduating in 1941. After graduation, and with WWII underway, Sally worked at several jobs throughout the region, including an airplane parts factory in Sidney.

END_OF_DOCUMENT_TOKEN_TO_BE_REPLACED

As a deaf guy, I don’t attend many musical performances.  They are largely exercises in frustration for me.  Before my hearing loss, I appreciated music, and I still appreciate memories of music, but the reality is that the notes don’t resonate when you are missing enough frequencies.

I attended last night’s performance to acknowledge the support provided by the Fly Creek Philharmonic for the Otsego Lake Association.  I enjoyed every minute of it.  This was the second or third time I attended a Fly Creek Philharmonic performance.  Knowing the visuals would be important and hoping that my lip-reading skills would help to understand the lyrics, I stood in the rear last night.

END_OF_DOCUMENT_TOKEN_TO_BE_REPLACED 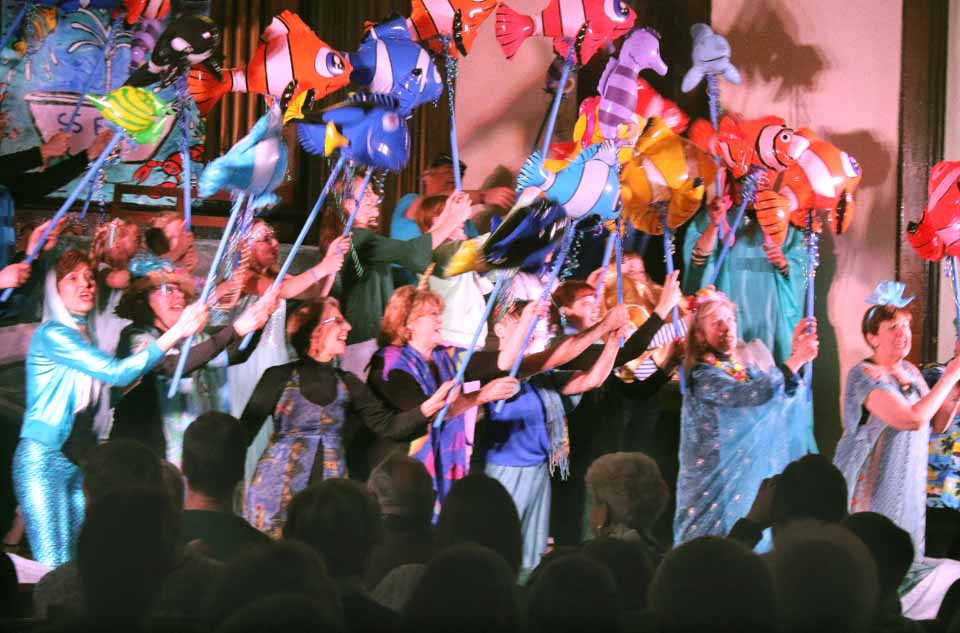 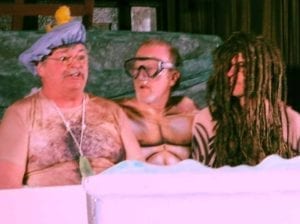 At  9 p.m. New Year’s Eve, crews from the Middlefield Volunteer Fire Department were called to 207 Rezen Road after a passerby called 911 on observing a home on fire.

END_OF_DOCUMENT_TOKEN_TO_BE_REPLACED

Workin’ On The Railroad