On Saturday, September 17 from noon to past midnight, Community Arts Network of Oneonta (CANO) will bring back the popular City of the Hills Art Festival.

“This is the largest committee we have ever had. Due to the pandemic, there hasn’t been a festival in 3 years, so we decided to extend the festivities, said Hope Von Stengel, Executive Director, CANO.

END_OF_DOCUMENT_TOKEN_TO_BE_REPLACED

PUMPKIN GLOW – 6 – 7:30 p.m. Take a stroll through the park, lit by Jack-O-Lanterns on the Friday before Halloween. Admire the creativity of your neighbors and vote on your favorite. Carved pumpkins must be dropped off before 5 p.m. The theme this year is ‘your favorite spooky story.’ Participants receive prizes for the People’s Choice Award and the best pumpkin that fits this the theme, and a chance to win a $50 gift card. You can also request a free pumpkin to carve and display in the park. Huntington Park, Oneonta. 607-432-1980 or visit www.facebook.com/hmloneonta/

END_OF_DOCUMENT_TOKEN_TO_BE_REPLACED

The Huntington Library and Park is celebrating its centennial anniversary at 4:30 p.m., Saturday, Aug.7, with cupcakes, drinks and a presentation from the city historian.
The first 100 guests will receive a plant. Guests will be able to discuss the proposed renovation of the park.
Call 607-432-1980 for more information.

END_OF_DOCUMENT_TOKEN_TO_BE_REPLACED

Oneonta will be closing Main Street from 5 p.m. to 10 p.m., Saturday, May 15, in celebration of SUNY Oneonta and Hartwick College graduates.
The street will be closed between Elm Street and Chestnut Street for the purpose of outdoor shopping and dining.

The Oneonta legislative council discussed the city’s mask ordinance Monday, May 10, and the matter is expected to be brought up at the next Common Council meeting at 7 p.m., Tuesday, May 18. Questions with the ordinance included whether to have different criteria depending on whether an individual was vaccinated.

The Oneonta Federated Garden Club will be holding their Spring plant sale 9 a.m. to noon on Saturday May, 29 at Huntington Park.

TRUNK OR TREAT – 4 p.m. Decorate your cars and bring the kids for fun activities from building a spider, pumpkin carving, make a ghost, and of course collecting candy. All stations are sanitized, 6 feet apart. The Railroad Inn, 28 Railroad Ave., Cooperstown.

END_OF_DOCUMENT_TOKEN_TO_BE_REPLACED

ONEONTA – When she saw the new plans for Huntington Park, it was like falling in love.

“I’m so head-over-heels for the fruit orchard,” said Tina Winstead, Huntington Memorial Library executive director. “That’s what Henry did,” Henry Huntington, the 19th century railroad magnate from Oneonta who donated the mansion and property that today makes up the library and grounds.

The planning began five years ago, but recently ramped up when $420,068 in funding for the redesign was made available from the state department of Parks and Recreation.

According to Winstead, when Stimson was hired, she was asked for previous blueprints, postcards and photos of the park to help guide the design, and when they came back, they had revived the orchards, the lilac walk, the “pinetum” – a collection of conifers along the edge of the upper park – and the rotunda.

“The rotunda really was here in 1919,” she said. “I like to think that Henry planned it. Stimson was very excited about the whole overlook idea.”

It’s not the only piece of forgotten history to be reinstalled. Stimson revived the sledding hill, which was fenced off and planted with shrubbery in the 1990s.

“Everyone talks about the sledding hill!” said Winstead. “And once we get all that cleared off, you’ll have such a beautiful view of the hills behind Main Street.

At the meeting, plans were detailed for Phase One of the project, which included the Playland and the Literary Garden.

The Playland would incorporate spaces at the top and bottom of the hill, including a labyrinth, a small play area, and a 40-foot long slide built into the hillside. “It’s a very unique element that will draw from all parts of the town,” said Glen Valentine, principal. “And to get to the top of the slide, there will be a rock scramble, which gives kids an opportunity to explore the hillside.”

“The slide was very unexpected!” said Winstead. “But my charge was for Stimson to do something remarkable that would bring families to the park. It could be a huge draw.”

The library doesn’t want a full playground, she said, for liability reasons, and hopes the public would weigh in on the slide on the survey, linked from the library website. “We really want people to either be all for it or not,” she said.

Stimson associate Sean Kline, an Oneonta native, said bluestone would be incorporated into the design, including the overlook and the rock scramble. “Table Rocks is my favorite spot in Oneonta,” he said. “It gives you an amazing context for the city and the materials of the region.”

The gardens, said Valentine, would function as a series of “outdoor classrooms,” each with specific plantings, such as a pollinator garden or an herb/medicinal garden.

There would even be a “literary garden,” which the library could change yearly to tie to a particular theme. “One year it could be colonial plants or a World War II ‘Victory Garden’,” he said.

In all, the full redesign would include a performance space in the lower part of the park and orchards in the arboretum at the top, similar to the ones Huntington had on the family farm the library is built on.

Additionally, the library received $122,000 in Library Construction Aid to install new lampposts to match the ones on Main Street.

Winstead said the park could get underway as soon as this spring, with completion by the summer.
“They really brought back the elements of the park that Henry wanted,” she said. “It feels very right.”

ONEONTA – With a labyrinth, an orchard and a 40-foot slide set in the hillside, Stimson Landscape Architects, Cambridge, Mass., presented their plan for Huntington Park during a Zoom meeting this evening.

Phase One was detailed during this evening’s meeting, with the plans for the Playland and the Literary Gardens.

END_OF_DOCUMENT_TOKEN_TO_BE_REPLACED

United Way Volunteers Ignore Cold to Help Others Be Warm

Cold to Help Others Be Warm

ONEONTA – Frigid temperatures on Martin Luther King, Jr. Day did not stop United Way Volunteer Coordinator Valerie Adams and nine volunteers from getting warm winter clothing and food to people who need them.

“I kept thinking I should cancel this morning because of the weather,” said Valerie Adams, volunteer coordinator for United Way. “But we had advertised we would have the packets on the trees today, and I didn’t want people going out in such cold weather to take them and then not find them there.”

Volunteers gathered at First United Methodist Church this morning  to do the last stage of United Way’s “Warm Inside and Out!” event,  packing gallon-sized plastic bags with food and warm clothing – hats, scarves, gloves, and mittens – donated by caring Oneonta residents and business owners over the past two weeks.

END_OF_DOCUMENT_TOKEN_TO_BE_REPLACED 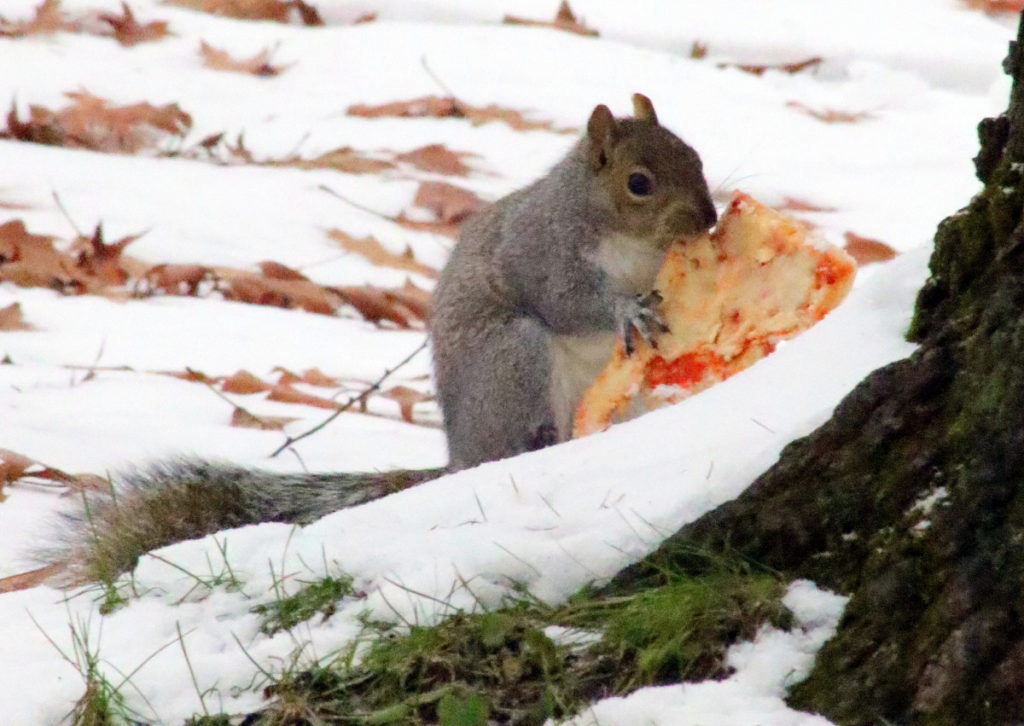 With the sudden onset of winter conditions, many squirrels can be seen gathering nuts for their winter hibernation. But this furry Oneontan seems to have hit the foraging jackpot as he is seen enjoying a slice of pizza this afternoon in Huntington Park. (Ian Austin/AllOTSEGO.com)