Golf for the Oneonta Theater

END_OF_DOCUMENT_TOKEN_TO_BE_REPLACED

ONEONTA – By the end of the year, Bob Brzozowski hopes, the newly revived Friends of the Oneonta Theater will have site control of the theater.

“We’ve seen places like Walton, Norwich, Bainbridge and Worcester re-open their theaters,” he said. “If small towns can do it, so can we.”

The original Friends of the Oneonta Theatre formed in 2008, when the theater went up for sale.

When entrepreneur Tom Cormier bought it in 2009, FOTOT helped him with theater restoration. But they soon parted ways, and although the group became less and less active, it still maintained its not-for-profit status.

When the Oneonta Theater went up for sale in 2015, GOHS, in collaborate with FOTOT members and other interested people, won a $50,000 Technical Assistance grant a hired Duncan Webb, Webb Management, one of the country’s leading theater consultants, to do a feasibility plan.

“The theater has good bones, but there’s work to be done,” said Brzozowski. “It’s going to take some major renovation projects.”

$2 million could not only restore the theater to working order, but re-open the two balconies and expand the lobby, Brzozowski said.

“It would be a completely different building,” he said. “We could go in and uncover the original murals, we could do an exhibit on all of the people who performed there. There’s so much more we can do beyond just getting it open.”

Rather than forming a new not-for-profit to buy and restore the theater, Brzozowski and the remaining FOTOT members revived the Friends organization.

“As we got closer and closer to what we wanted to do, we realized it was just easier that way,” he said.

The reformed FOTOT will work to update some of its  rules and bylaws to make sure it is in compliance with newer New York State regulations. “The past members did a great job in setting things up, but there are a lot of other things that have changed at the state level,” he said.

At an organizational meeting Friday, Jan. 17, at GOHS, attendees voted to join the New York Council of Nonprofits (NYCON), whose local office is managed by Andrew Marietta, the county representative.

“We also joined the League of Historic American Theaters,” Brzozowski said. “We weren’t part of that before.”

In the spring, Brzozowski hopes to launch a capital campaign, after the group determines how much they want to raise – and how people can get involved to help.

“One of the models we’re looking at is like the State Theater in Ithaca,” he said. “When people make a donation of a certain amount, they own a share of the theater, so it’s really a community-owned theater.”

And more than that, they hope to get support from other institutions, including SUNY Oneonta and Hartwick College, and said a “shared booking agent” would go a long ways to strengthening ties to Foothills

“Wouldn’t it be great to have the Catskill Symphony Orchestra play in that beautiful theater?” he said. “We could open it up to the Glimmerglass Film Festival as an additional venue. It’s got great acoustics, and it’s a shame it’s not being used.”

END_OF_DOCUMENT_TOKEN_TO_BE_REPLACED

For $3M, Theater Can Reopen In Collaboration With Foothills

ONEONTA – Oneonta Theater can be back in business again for $3 million.
Evan Delli Paoli, an architect with the New York City-based firm, Holzman Moss Botino, told a gathered audience at Foothills on Tuesday, Feb. 19 that amount would pay for basic but necessary restorations and improvements needed to make Oneonta Theater operational.
That was the final conclusion in the feasibility study, headed by Duncan Webb, Webb Management Services, into whether or not the Oneonta Theatre could be saved.
Delli Paoli labeled that combination of cost and restoration items as a “Good” budget item as well as two other budget-restoration packages labeled “Better” and “Best.” Their budgets were $6 million and $10 million, respectively, with more restoration items and higher quality work corresponding to the costs.

“All three of these price points are so the project can move forward,” Delli Paoli said. 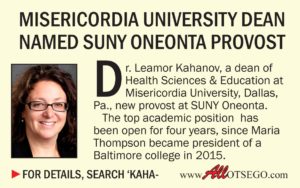 Basic work on the theater included such items as stabilizing the theater’s interiors and overall structure and bringing the building into code compliance. The higher cost packages added items such as restoration of the theater’s interior plaster and enlarging the orchestra pit.
Delli Paoli also presented a list of “a la carte” restoration/improvement items that he said could be done independently or in addition to one of the three suggested budget categories.
He also proposed $2-300,000 for doing minor improvements to the Foothills Theater. He said his firm envisioned the Oneonta Theater and Foothills established as anchors of a new arts district in Oneonta. END_OF_DOCUMENT_TOKEN_TO_BE_REPLACED

$3M Would Reopen Theatre, But With Foothills Involved

But With Foothills Involved

ONEONTA – Duncan Webb of Webb Management Services and his team of consultants, who have spent the past six months assessing whether the Oneonta Theater can be a successful performance venue, will report their findings at 7 p.m. Monday, Dec. 17, in the Foothills Atrium.

The public is welcome at the public presentation, with Q&A to follow.  Webb Management Services is considered the foremost consultant in the area of theater development.

END_OF_DOCUMENT_TOKEN_TO_BE_REPLACED

Study Should Underscore That

Amy Schumer’s almost-instantaneous sellout performance Tuesday, May 29, at Oneonta’s Foothills Performance Arts Center proves it: There is a demand for top-rated entertainment in Otsego County.
The remaining question: What’s the price point?
As Schumer proved, $20 – a true bargain – is fine. So is probably $30. Maybe $40. Certainly, at $50 a seat there will probably be some audience erosion, but how much?
At $20, Foothills grossed an estimated $14,000. At $40, it would have been $28,000, not a bad gate, plus bar sales.
It was quite a story. Foothills Manager Bill Youngs looked up from his desk the Friday afternoon before and there was Amy Schumer herself, one of the nation’s top comics (and a niece of our U.S. senator, Chuck Schumer.)
Having recently moved to the area, she wanted to do a benefit in four days, to test out the material in her upcoming “Amy Schumer And Friends” national tour.
Youngs and his office manager, Geoff Doyle, rose to the occasion, setting up an online ticket office in short order and getting the word out over social media. Overnight, the 650 tickets were sold. (Well done, guys!)
The line that evening extended up South Market Street almost to Main, an unprecedented sight in the City of the Hills. Since Gordon Lightfoot reopened Foothills in 2010 to great excitement, there’s been only one other sellout.
Now, no doubt, Youngs and his board members are sharpening their pencils and looking at their performance list to see how Amy’s hit evening might be duplicated, and triplicated, and quadruplicated … and so on.
•
Still, the whole question of what Greater Oneonta, and that includes Cooperstown, can afford in the way of entertainment is still up in the air, despite notable successes in the market. Another example: retiring Catskill Symphony Orchestra maestro packed SUNY Oneonta’s Dewar Arena April 28 for his final concert.
That question mark looms lately in the mind of anyone who may walk past the historic Oneonta Theater, and to see its front doors plywooded over despite the best efforts of its owner, Tom Cormier, over a decade.
Happily, Mayor Gary Herzig can report, FOTOT – the Friends of the Oneonta Theater – in collaboration with the Greater Oneonta Historical Society, has been awarded $60,000 from the city’s Downtown Redevelopment Fund to answer that question.
FOTOT/GOHS has contracted with New York City’s Webb Associates, the foremost arts-center consulting firm in the country, to finally conduct a market survey to determine how much entertainment Greater Oneonta can afford, and what type.

Foothills declined to participate in seeking the city grant, but Mayor Herzig says it’s now agreed to provide consultant Duncan Webb whatever information he may need to come up with a sound conclusion on the arts scene as a whole.
“That’s important,” said Herzig, “because you can’t talk about restoring the Oneonta Theater without talking about Foothills. They have to work together. They have to have a defined market niche. We’re not looking to build up one at the expense of the other.”

Webb is expected to start work in early July – very exciting, particularly since City Hall, leveraging $10 million from the Cuomo Administration in Downtown Revitalization Initiative (DRI) funding, now has the money to act on Webb’s best recommendation.
“That’s exactly what we need to know,” Herzig said. And right now, we don’t.
•
According to Herzig, in addition to a market survey, the $60,000 will be used to determine what it will cost to renovate the historic theater back to its original glory. (Cormier put a new roof on it, so – fingers crossed – damage won’t be structural.)
“The outcome of this study may be there’s not enough support in Onoenta. Or the engineering study may say it just costs too much,” Herzig continued. “FOTOT understands this could be the outcome.” But at least everyone will have given it “their best shot.”
The mayor – and all arts fans, who enjoy Foothills today and enjoyed the Oneonta Theater, even under its latest struggling incarnation under Cormier – have to hope both very different facilities can finally thrive, particularly with the 2008 recession fading and a sense that better times are arriving.
As a good omen, Herzig points to Catskills Hospice contracting with ZZ Top, the beard-toting, guitar-driving band that’s been packing houses for almost a half-century now, to perform at its annual fundraising concert Saturday, Aug. 25, at the Sixth Ward Athletic Club field.
Tickets, he pointed out, will be as much as $250, and it’s sure to be a sellout.
It’s a benefit concert, sure. But a sellout would again show the draw of top quality, as Gordon Lightfoot and Judy Collins and Loretta Lynn did almost a decade ago now.
In the baseball region, let’s say with some confidence: If we book it, they will come. It being quality, which entertainment fans will certainly appreciate and, we can hopefully anticipate, support.

END_OF_DOCUMENT_TOKEN_TO_BE_REPLACED

Options To Be Discussed Tuesday

In ‘Conversation’ At History Center

ONEONTA – The deteriorating Oneonta Theater has reached a “critical stage,” Bob Brozowski, Greater Oneonta Historical Society executive director, told the GOHS’ annual meeting this evening, and a “Community Conversation” has been scheduled for 8 a.m. Tuesday in the History Center, 183 Main St., to discuss how it may be saved.

Kathleen Gasperini, a theater expert who has a summer home in Schenevus, will be among the attendees, Brzozowski said.  All interested parties are welcome.

“We can’t lose that theater,” Brzozowski said, and he hopes ideas will come out of Tuesday’s meeting to keep the building secure until its future can be defined.