Hats Off to Ommegang

Hats Off to Ommegang

“As part of our 25th anniversary, we thought it only proper that we do something to celebrate all the support the Cooperstown business community has given us over the years,” said Tim Holmes, event planner of Ommegang Brewery.

“We began with a kick off on the prior Friday evening with an open invitation to a social gathering around its well-known fire pit,” Mr. Holmes said. “The evening was capped off with a solid and colorful fireworks display.”

Next came the parade down Main Street in Cooperstown.

END_OF_DOCUMENT_TOKEN_TO_BE_REPLACED

SANTA ARRIVES – 5 p.m. Bring the friends and kids to greet Santa as he arrives at his cottage. Refreshments and music will be available. Please wear a mask to visit Santa’s cottage. Pioneer Park, Cooperstown.

END_OF_DOCUMENT_TOKEN_TO_BE_REPLACED 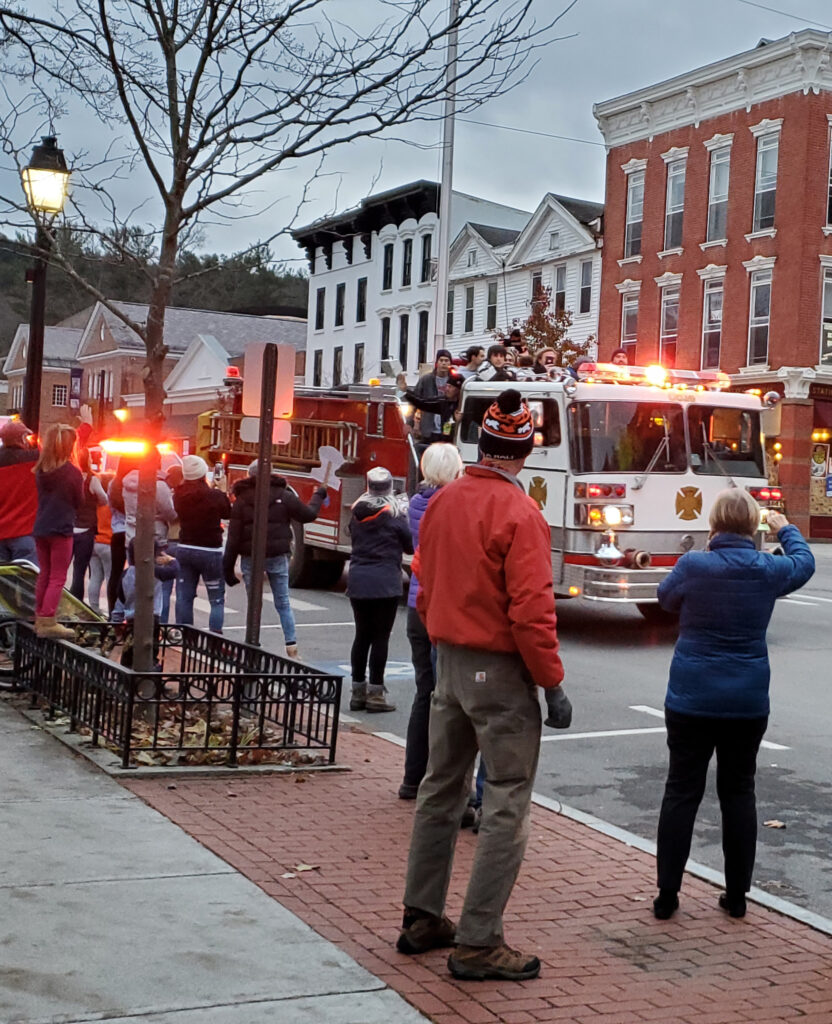 Main Street was the place to be this evening a little around 4 p.m. as the Cooperstown community celebrated the Cooperstown Boys Varsity Soccer team. Cooperstown, Fly Creek, fire department and emergency squads as well as the county Sheriff were all represented in the parade carrying the boys on a circuit down Chestnut St., Main Street, and River Street.

Braving the chilly weather and a delay caused by an afternoon thunderstorm to play in the NYS final 4, the boys nevertheless met a staunch opponen in the Alexander Hamilton boys soccer team and were defeated 4-0.

CELEBRATION – 10 a.m. – 5 p.m. Celebrate the nations independence with sights and souds of the 18th century. The Farmers’ Museum, Cooperstown. 607-547-1450 or visit www.farmersmuseum.org/event/independence-day-celebration/

INDEPENDENCE DAY PARADE – 1 p.m. The parade will line up at Noon at Foothills and proceed down Main Street to Neahwa Park for remarks and festivities. All essential workers are invited to participate and will have a chance to win door prizes from local businesses when they register. Bassett CEO Tommy Ibrahim will be serving as Grand Marshall. Main Street, Oneonta. Visit www.facebook.com/FNOneonta/

INDEPENDENCE DAY FESTIVAL – 2 – 11 p.m. After the Parade enjoy food, entertainment on the main stage, support local artisans, and much more at the festival. Mayor Gary Herzig and mayoral candidates will be presenting remarks to honor our essential workers. Neahwa Park, Oneonta. Visit www.facebook.com/FNOneonta/

INDEPENDENCE DAY FIREWORKS – 9:30 p.m. Five Star Subaru will be presenting the fireworks display, dedicated to Essential Workers, which will be ‘twice as intense’ as years past. Neahwa Park, Oneonta. Visit www.facebook.com/FNOneonta/

END_OF_DOCUMENT_TOKEN_TO_BE_REPLACED

Supporters Of OPD Parade Through Town 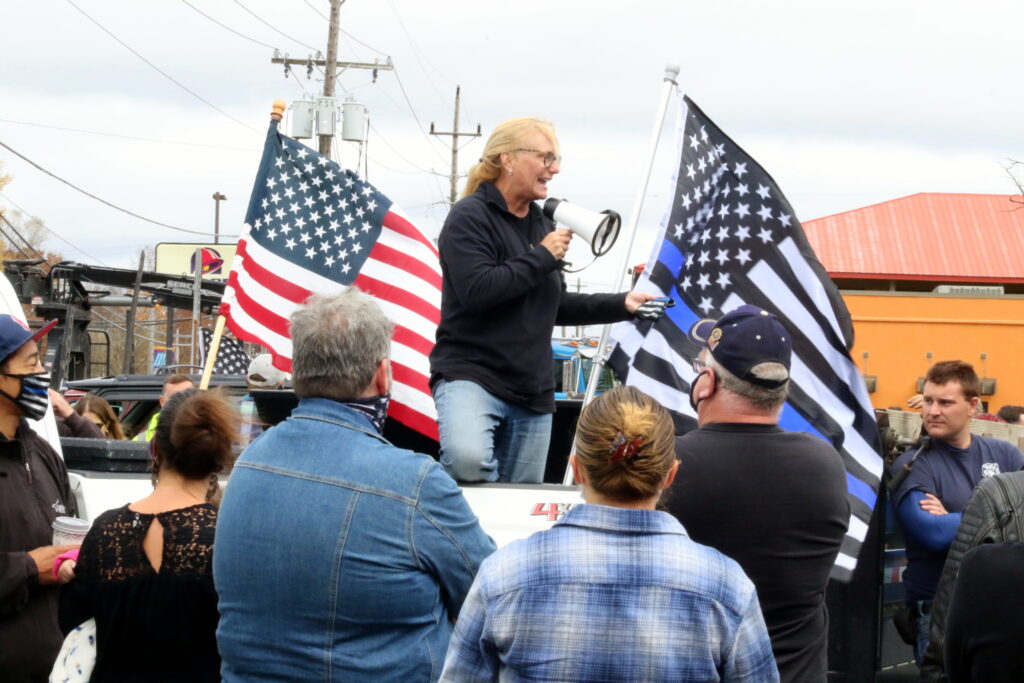 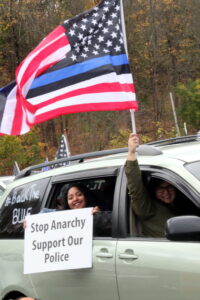 Amy Smithling of Oneonta, above, addresses crowd members gathered at the former Christopher’s Restaurant site on Southside as they prepare for a parade earlier this afternoon in support of the Oneonta Police Department. “This is about the OPD and the support they deserve,” said Smithling. “This is not about us versus them. This is not a Trump Rally. This is simply a show of force to support the OPD!” Inset, Genesis Bushnell, Laurens, and Shannon Speenburg, Unadilla, wave the “Thin Blue Line” flag in support support as they fall in line with numerous trucks and cars, including firetrucks and cement mixers, joined led the parade with flashing lights and sounding horns on their path through the city.  The issue came to the fore when Oneonta Police Chief Doug Brenner removed the “Thin Blue Line” flag from the pole in front of the Oneonta Public Safety Building a few days ago. (Ian Austin/AllOTSEGO.com) 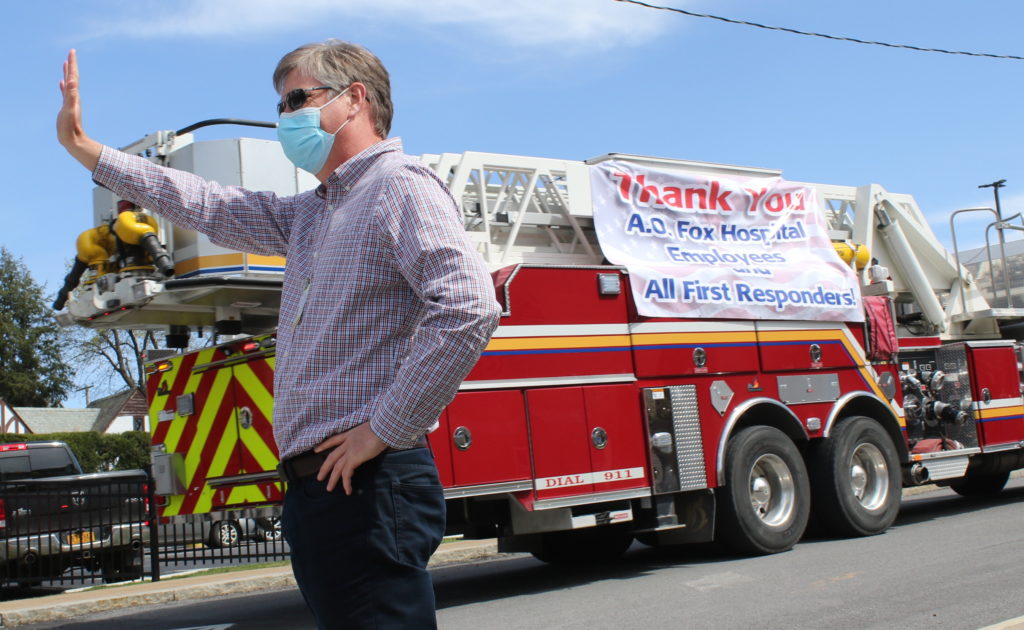 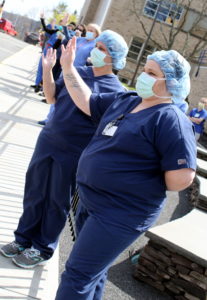 END_OF_DOCUMENT_TOKEN_TO_BE_REPLACED

PARADE – 5 p.m. Dress your best and show off your costume in this years Halloween parade down Main St., Cooperstown.

PUMPKIN GLOW – 6 – 7:30 p.m. Bring your carved pumpkin to enter in a contest or just to display to the trick-or-treaters. After the sun goes down stroll through the park and admire everyone’s handiwork. Huntington Memorial Library, 62 Chestnut St., Oneonta. 607-432-1980 or visit www.facebook.com/hmloneonta/

END_OF_DOCUMENT_TOKEN_TO_BE_REPLACED

OLDEST PARADE – 11 a.m. The second oldest parade in the country kicks off again, with a full day of festivities to follow, including a concert and fireworks at dusk. Springfield Center Community Center, 129 Co Rd 29A, Springfield Center.