Republicans romped across Otsego County on Election Day 2020, leading with the top of the ticket, President Donald Trump.

Casale said the Republican victory margins in all key local races are too great to be overcome by the 6,000 absentee ballots that will be counted in the next 10 days.

Democratic County Chairman Clark Oliver texted that he was unable to talk about the evening.
But Richard Sternberg, Cooperstown, the Democratic state committeeman, said, “There’s still a strong feeling for the Republican Party here; that’s clear.”

In Otsego County, the only Democrat to gain support from a majority of the voters was freshman Congressman Antonio Delgado. Other than that, it was red, red, red, beginning at the top.

Reached at his victory celebration, Oberacker acknowledged, “We did crack the champagne a bit. I won’t say it was premature: All the indications are there, so we decided to celebrate.”

What gave him the edge, he said, was “just taking to folks in a common sense manner. We’ve logged 11,000 miles in the 51st, and I’ve spoken to people of all social strata, from farmers to businessmen.”

Asked if he planned to take a little time off, he said, “No, we’re going to get to work.” He was scheduled to speak with a Form Tech client in Bangkok, Thailand, at 4 p.m., and planned to attend the county Board of Representatives monthly meeting at 10 a.m.

“After that,” he said, “we’re going to get down to the business of the 51st District.”

Casale, who was at Oberacker’s victory celebration, said, “I think the voters saw the value of having individuals who can go to Albany and fight for their values.”

In particular, Salka campaigned against the Democrats’ bail-reform law, introducing a bill to repeal it.

And Oberacker said that on Jan. 1, his first day in office, he will introduce companion legislation in the Senate. 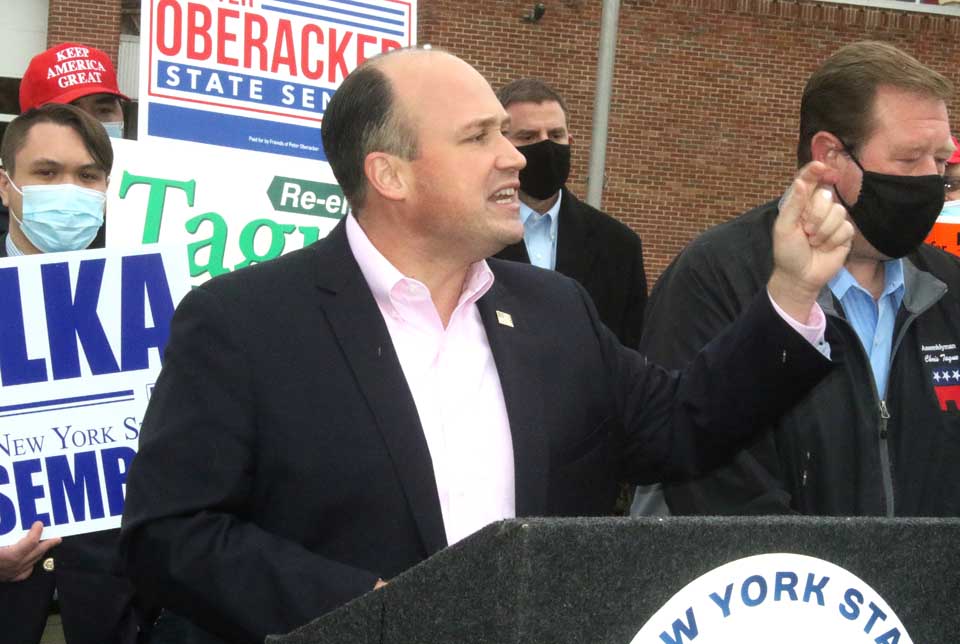 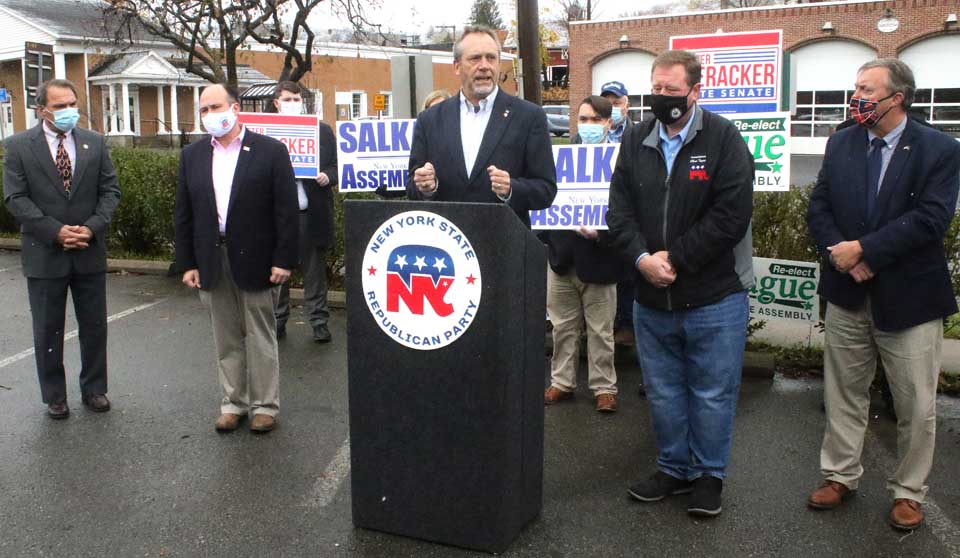 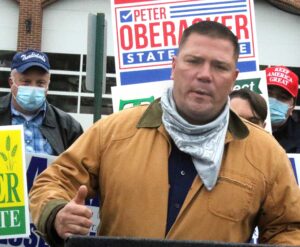 The threat: State Sen. Jim Seward, R-Milford, is retiring after representing us in Albany for 34 years, where he was able to maintain Otsego County at the center of the 50th District, then the 51st District, through three redistrictings.

A Republican when the Senate was usually Republican, he partnered with our Democratic then-assemblyman, Bill Magee of Madison County, to obtain (probably more than – hurray!) our fair share in state largesse.

Regrettably, our senator is retiring at the end of the year – not because he wants to, but due to health challenges: cancer and, earlier this year, COVID. He departs with as close to universal good wishes as anyone could expect or hope for.

Opportunity One: Peter Oberacker, a successful businessman and energetic county representative from Schenevus, is seeking to succeed Seward – with the senator’s blessing – and deserves every Otsego County vote.

Oberacker arrived in Otsego County in time to enter first grade, and is devoted to his adopted county, moving his research and marketing business home from College Station, Texas, four years ago so he could focus more intently in developing a 300-job distribution center at Interstate 88’s Exit 18. It should happen and, based in Albany, he can better apply the levers to obtain whatever state help is possible.

His opponent, Democrat Jim Barber, a prominent farmer in the Schoharie Valley, went negative last week, suggesting he knows he’s behind. His mailer suggested Oberacker has
an attendance challenge on the county board, but that’s wrong: chairing Public Works and serving on a half-dozen key committees, he has invested more time in county duties than many of his colleagues, even managing the highway department day-to-day for weeks when a past superintendent peremptorily retired.

Opportunity Two: Dan Buttermann, an Oneonta Democrat who is running again for the 121st Assembly seat against John Salka, the freshman incumbent from Madison County.

If elected to the Democratic-majority body, Buttermann, an NYCM casualty manager (and clarinetist in the Catskill Symphony), is young enough – 36 – that he could achieve Seward-like seniority in the Democratic-dominated lower house over the next 30 years, with attendant benefits.

In an interview, Buttermann mentioned 2050 a few times – the father of three young daughters, he’s thinking long term on such issues as Climate Change, paying his way to Al Gore’s Climate Reality Leadership Corps’ seminar in 2018 in L.A. He’s a knowledge-driven thinker who brought TedX mind-broadening seminars to Oneonta.

He and Oberacker, conceivably, could establish a Seward-Magee-like partnership, to the benefit of Otsego County.

To support the home team is not to criticize Salka, the scrappy and likeable incumbent with an inspiring personal story who, in the face of a large Democratic majority, is reaching beyond the Assembly to the bureaucracy to solve his district’s problems.

On social issues such as bail reform, he may be closer to his constituents than his challenger. Will Buttermann’s support for gradually rolling back a measure that’s keeping at least petty criminals on local streets resonate sufficiently with voters?

And, given Madison County’s larger population than Otsego’s, Buttermann is not guaranteed a win from a constituency that tilts Republican. Still the Oneontan is an engaging hard worker who beat a Madison County candidate in the Democratic primary.

He can win, and an Otsego-based Oberacker-Buttermann team in Albany would only help our county’s fortunes.

‘On Jan. 1’ If Elected Tuesday To State Senate

County Will Suffer From State Bungling, He Says;

ONEONTA – The State of New York should provide “immediate financial relief” to Oneonta and surrounding communities for the damage caused by the mishandling of the COVID-19 outbreak at SUNY Oneonta, Republican state Senate candidate Peter Oberacker said today.

Oberacker, who is running to succeed Jim Seward, R-Milford, in the 51st District, suggested the state should react “much like you would see in response to a natural disaster.”

END_OF_DOCUMENT_TOKEN_TO_BE_REPLACED

Why Not Plan Locally

County Rep. Peter Oberacker, R-Schenevus, who is also running for state Senate, suggested yesterday that, instead of waiting for Governor Cuomo to tell us when and how to reopen, we in Otsego County should put together our own un-PAUSE plan, present it to the governor, and act on it.

Hmm.  That would follow the model the Cuomo Administration is applying to factories and construction sites due to open May 15:  The companies are developing plans to submit to the state, not vice versa.

“Why can’t we go to our governor and tell him:  We understand it. We need to open. Here’s our plan to move forward,” said Oberacker in an interview with www.AllOTSEGO.com. “Let’s put together a structured plan to reopen Otsego County.”

He was criticized last evening by his Democratic opponent, Jim Barber of Schoharie, for flouting “medical experts and science-based criteria.”  But what the experts are recommending can be known and applied, without waiting for Albany to do it for us.

SCHOHARIE – Democrat Jim Barber this evening issued a statement saying he “profoundly disagrees” with his Republican opponent Peter Oberacker‘s idea of developing a local plan to reopen Otsego County instead of waiting for Governor Cuomo to do so.

END_OF_DOCUMENT_TOKEN_TO_BE_REPLACED

Let US Decide How To Reopen, Oberacker Says

He Votes Nay But, After Lively Debate,

Oberacker, who is also running for state Senate, was the sole “nay” vote as a resolution asking the governor to reopen the county “safely and as soon as possible” passed the Board of Representatives today by a 13-1 vote.

“Why can’t we go to our governor and tell him:  We understand it.  We need to open. Here’s our plan to move forward,” said Oberacker in an interview after the meeting. “Let’s put together a structured plan to reopen Otsego County.”

The resolution the county representatives passed was less specific.

END_OF_DOCUMENT_TOKEN_TO_BE_REPLACED

“We’ll have a tent outside the first department,” said Oberacker, who is running the state Senate on the Republican line to succeed Jim Seward, R-Milford.  “You can drive up, and we’ll hand out one free bottle per household while supply lasts.”

A second distribution is planned 4-7 p.m. Wedneday, April 15, also at the fire department.

END_OF_DOCUMENT_TOKEN_TO_BE_REPLACED

But what the 130-acre site at I-88’s Exit 18 – selected out of 86 sites within two miles of Otsego County’s nine interstate exit as the best for a 350-500 job distribution center – has that’s almost impossible to find is “99-percent community support,” said county Rep. Peter Oberacker, R-Schenevus. 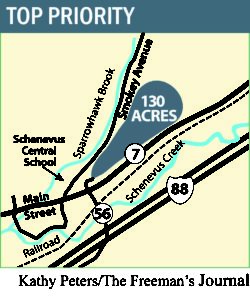 “When we had discussions with development firms,” said Oberacker, “they said that’s one of the biggest positives: The town is for it. They said, ‘That’s huge.’”

Oberacker was interviewed after a consulting firm, McFarland Johnson of Binghamton, hired by the county Board of Representatives to rank distribution-center sites, reported last week it had narrowed its selection from 86 to 62 sites, then to 10, then to five – and then two: the one at Exit 18, and another to Tait Road atop a mountain on the other side of I-88.

The study was commissioned after Oberacker had convinced Sandy Mathes, then Otsego Now president, of the benefits of the Kinch property for a distribution center, the county board commissioned the McFarland Johnson study to make sure the optimum site was chosen.

After Adam Frosino briefed the county reps at their March meeting on the 4th – the Tait Road site was bigger and flatter, he said, but the approach was up steep Route 41 – the board gave the go-ahead to the Schenevus distribution center, the type used by Amazon, Dollar General, Walmart — virtually every major U.S. retailer.

The site, said Frosino, is right off I-88, where an entrance with “curb appeal” can be created by turning the T at the exit and Route 7 into a four-way crossroads. Plus, a second entrance is possible from Smokey Avenue, which runs along the site’s west side.

There’s sufficient land for a 600,000 square foot building, access to utilities, and an owner — Ron and Helen Kinch — willing to sell.

While Tait Road could accommodate a million-square-foot building, Frosino was asked what big retailer would be interested in a 600,000-square-foot one possible at Exit 18. Yes, he replied. Some distribution centers are as big as 1.5 million square feet; some as small at 300,000 square feet.

The Schenevus site is just right, he said.

Oberacker, who is now running for state Senate to succeed retiring state Sen. Jim Seward, R-Milford, points out the #1 site is also south-facing, meaning anyone who locates there can take advantage of solar energy to allay costs.

Two challenges remain, he said the interview. One, sewage disposal: he said a package plant might suffice. Two, natural gas; in addition to solar enhancements, truck deliveries along I-88 might be sufficient, he said.

It was also pointed out that a distribution center could spur related development — a truck stop/gas station, for instance, or a motel.

The next steps, Frosino said, are a market survey, conceptual site plans, a conceptual cost estimate and obtaining environmental reports. The idea is to make the site “virtually shovel-ready,” he said.

The idea, also, is that Otsego Now, the county’s economic development arm which last week received a $75,000 allocation from the county reps, would buy the site and market it. Since it would be job-creating, there would likely be state grants available to help with its development.

Engineers Pick It From 86

A little over three years ago, they proposed 130 acres of level land on a rise to the north of I-88’s Exit 18 at Schenevus for a 250-500-job distribution center, the type used by Amazon, Dollar General, Walmart — virtually every major U.S. retailer.

Today, after months of study, Adam Frosino, an engineer from McFarland Johnson, Binghamton-based consulting engineers, told the county Board of Representatives that 86 potential sites had been identified within two miles of Otsego County’s nine I-88 exits.  They had been winnowed down to 26, then 10, then five, then two.

Of those two, the reps selected … the site championed by Oberacker and Mathes at the outset.

END_OF_DOCUMENT_TOKEN_TO_BE_REPLACED

As Successor, Seward Gets Behind Oberacker

“I wholeheartedly endorse Peter Oberacker and look forward to calling him my New York State senator,” said the 34-year veteran.