'SNL' mocks mask confusion over new CDC guidance: 'Is this a trap?'

While living in Sidney, Susan worked as manager at the Super 8 Motel. In her downtime she enjoy gardening, baking, and spending time with her family.

END_OF_DOCUMENT_TOKEN_TO_BE_REPLACED

Truck Overturns On I-88 Near Sidney

SIDNEY – I-88 is open again following a tractor-trailer accident that left the truck driver injured and fuel and cargo scattered on the roadside.

James E. Witt, 40, Scio was traveling eastbound on I-88 in Sidney when he traveled off the southern shoulder and traveled approximately 500 feet before striking earth embankment and overturning on its side. Unadilla and Wells Bridge Fire Departments were dispatched to the scene at 5:23 p.m. and the Witt was transported to Wilson Hospital complaining of head and rib pain.

END_OF_DOCUMENT_TOKEN_TO_BE_REPLACED

This Is A Developing Story,

Please Check Back For Details

END_OF_DOCUMENT_TOKEN_TO_BE_REPLACED 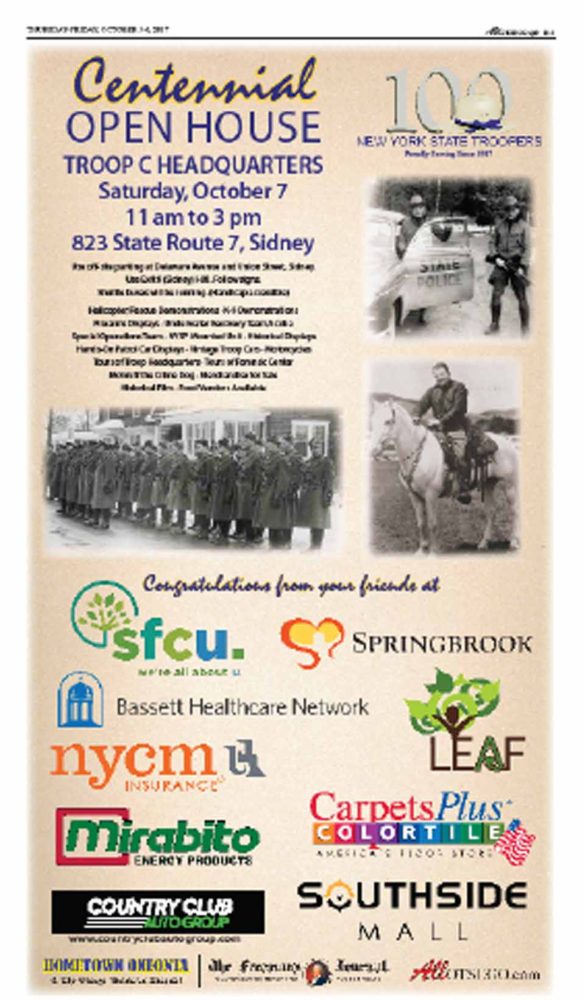 This week’s edition of Hometown Oneonta, containing details of this Saturday’s celebration at Troop C of the 100th anniversary of the New York State Police, has been distributed along Route 7 west of the city to be available to residents in proximity of the barracks between Sidney and Unadilla.  Pick up a free copy at the Great American in Sidney, the Victory market in Unadilla and other convenience stores and delis along that route.  As to Saturday, see you there!

The network also announced that an applilcation has been submitted to the state Health Department to allow Tri-Town to operate as a “satellite emergency department” administered by Fox Hospital, rather than the Bassett mother ship in Cooperstown.

END_OF_DOCUMENT_TOKEN_TO_BE_REPLACED

ONE DAY LEFT IN KETTLE DRIVE

ONEONTA – With one day left in the Salvation Army’s annual kettle drive, donors have cut the distance to the $60,000 goal to $94 short of $10,000, Maj. Sharon Harford, commander of the Oneonta post, reported a few minutes ago.

“People have been very generous,” said the Salvation Army officer.

END_OF_DOCUMENT_TOKEN_TO_BE_REPLACED

SIDNEY – Muriel Mary (Wilson) Holstead Dix, 96, a former office manager at Bresee’s Department Store and devout member of St. James Episcopal Church in Oneonta, died Dec. 8, 2016, in Sidney, where she had lived the past 21 years.

Born in 1920 in The Bronx and raised in Valley Stream, L.I., Muriel had resided in the Greater Oneonta area for 54 years.

END_OF_DOCUMENT_TOKEN_TO_BE_REPLACED

SIDNEY – State police have charged a 22-year-old Sidney man for shooting a cow.

On Tuesday, troopers at Sidney arrested Nevin D. Cutting, 22, for felonies of aggravated cruelty to animals, criminal mischief 2nd degree and the misdemeanor of illegally discharging a firearm.

The officers alleged that on Sept. 19, they responded to the report of a dead cow found near Pine Hill State Land in the Town of Sidney.

END_OF_DOCUMENT_TOKEN_TO_BE_REPLACED

SIDNEY – Thomas R. Herring, 63, of Unadilla, a career-long toolmaker, passed away on Aug. 27, 2016 at Our Lady of Lourdes Hospital in Binghamton.

A brother’s family and nieces survive in Oneonta.

Tom, who many knew as “Hoby,” was born in Stamford to Hobert and Helen Herring on Dec. 9, 1952. He graduated from Unatego Junior/Senior High School in 1970 and  went on to earn a certificate in toolmaking from the International Association of Machinists & Aerospace Workers. He was a toolmaker at several companies, including many years at Amphenol Corp.

END_OF_DOCUMENT_TOKEN_TO_BE_REPLACED

Mother Of 5 Worked At SUNY Oneonta

END_OF_DOCUMENT_TOKEN_TO_BE_REPLACED

In Raid Near Sidney

END_OF_DOCUMENT_TOKEN_TO_BE_REPLACED

To Amphenol During Open House

•    Antique 1960s-era gold charm bracelet with five large heart-shaped gold charms.   The charms may contain inscriptions on the back that contain the names “Henry,” Jeanette” and various dates.

•    Gold ring with a heart and diamond chip in the heart-shaped setting.

Please call Investigator Craig Starr with any information that could lead to the recovery of these items.  When you call (607) 561-7400 please reference Case # 6365669.