Five-Time All-Star Will Be Inducted in Cooperstown July 23

McGriff was the only candidate elected from the Contemporary Baseball Era Committee Players Ballot, which was considered by a 16-member committee that held meetings in San Diego. The eight-person ballot was comprised of candidates whose primary contribution to the game came from 1980 to the present.

END_OF_DOCUMENT_TOKEN_TO_BE_REPLACED

Standing next to his uncle amongst the roaring Jack Murphy Stadium crowd, a young Neal Moore watched the Cincinnati Reds’ Johnny Bench step into the batter’s box for one of his final career at-bats. Pausing to capture the moment, he felt forceful echoes of “We want Johnny! We Want Johnny!” rumble throughout the grounds. It was a moment, he said, that made him understand the significance of baseball.

“There were three pitches and there were three strikes. And it didn’t matter. In the nosebleeds [seats] with my uncle, I thought to myself, this isn’t about the Padres, and it’s not about the Reds. This is about baseball, America’s pastime. Right here and right now is something beautiful. There are moments that are magic,” he explained.

END_OF_DOCUMENT_TOKEN_TO_BE_REPLACED

Though the fixture proved scoreless in the end, watchers were treated to a fast-paced, physical match-up between one of the tournament favorites in England and a scrappy, youthful U.S. squad. With their 1-0 win against Iran on Tuesday, November 29, the U.S. team finished second in Group B, advancing to the Final 16 knockout round for the first time since 2014. They play next on Saturday, December 3 against the Netherlands.

ONEONTA – Surrounded by friends and family, Oneonta High School’s Aidan Gelbsman signed his national letter of intent to play Division I baseball for the University at Albany on Thursday, November 17.

The Yellowjackets hurler, who committed in September, boasts a fastball in the high 80s, which, along with his offspeed stuff, helped him throw two no-hitters during his junior season.

END_OF_DOCUMENT_TOKEN_TO_BE_REPLACED

COOPERSTOWN—The Houston Astros made history at the 2022 World Series. Now, artifacts from the second World Series championship in franchise history are coming to the Hall of Fame.

Following the Astros’ 4-1 win on Saturday night, the team, its players and manager generously donated several artifacts that tell the story of their victory to the Hall of Fame, and those pieces will soon take a permanent place in Cooperstown.

END_OF_DOCUMENT_TOKEN_TO_BE_REPLACED

ONEONTA—The New York State Athletic Trainers’ Association has named Lauren Stephenson, athletic trainer at SUNY Oneonta Athletics, as the new president of the organization. NYSATA stands to advance the profession of athletic training for the purpose of enhancing the quality of healthcare for the physically active in New York State.

As president of the organization, Stephenson plans to draw on her business consulting and administration experience to elevate the profession and awareness of athletic trainers with the goal of improving the general public’s understanding of what athletic trainers do and the importance of their role in protecting the health and well-being of the physically active. She also aims to bolster diversity and inclusion initiatives while working to get legislative goals passed in New York State. This includes an ongoing effort to pass a bill that would require licensure for athletic trainers, rather than just a certification.

END_OF_DOCUMENT_TOKEN_TO_BE_REPLACED

As baseball’s brightest lights shine on its biggest stars, one of Cooperstown’s most beloved events returns to the Hall of Fame. After a two-year absence due to the pandemic, the World Series Gala will be held at the Baseball Hall of Fame on Saturday, October 29 in the Grandstand Theater. The World Series Gala features a family-friendly evening packed with complimentary ballpark food and soft drinks, trivia, raffles, prizes, and a screening of FOX’s live broadcast of Game 2 of the 118th World Series. Doors open at 7:30 p.m., with the game expected to begin at 8 p.m.

Tickets are required for the World Series Gala at a cost of $15 for adults and $8 for children under 12. Tickets are now available to participants in the NBHoF membership program by calling (607) 547-0397 weekdays from 9 a.m. to 5 p.m. Any remaining tickets will go on sale to the general public on October 24.

When I was in second grade, my parents decided to get rid of our television. Since at the time television was the only source for watching sports, I grew up never really watching them or developing a love for a particular team. So, on our wedding day, in the throes of young love, I vowed to root for my husband’s sports teams. Unbeknownst to me, loving my husband’s teams would prove to be futile over the decades. Every spring he gives his heart to his beloved Baltimore Orioles and every fall he dusts off the bruised, battered remains of his heart and hands it over to the Miami Dolphins.

For those who do not follow baseball or American football, let me assure you of the futility of this love. Since the last time the Orioles won the World Series in 1983 (39 years ago, and five years before I met my husband) they have made the playoffs just five times, and lost in the second round four times and the first round the fifth time. So over four decades we have won four post season games in baseball. Period. In 2021, one headline read, “The Orioles Have Been Legendarily, Historically Awful.”

END_OF_DOCUMENT_TOKEN_TO_BE_REPLACED 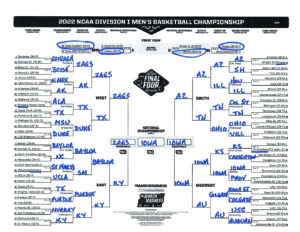 You say you want some sports? I got your sports right here!

It’s March Madness, that time of year when I set aside my utter ignorance for all things college basketball and plunge face-first into filling out a tournament bracket. I pinpoint the data, poring carefully over each school’s win-loss record, coaching strategies, recruitment violations, and other important calculations.

Here’s one that I used to win a pool back in the 1990s: I had just finished reading a biography of Bing Crosby, wherein I learned Bing was graduated from Gonzaga University. That was all the reason I needed to choose the ‘Zags – at the time an upstart team on the margins – and that year, they stunned the basketball world and made it to the Elite Eight. I won a few bucks and they became a perennial powerhouse.

Perhaps you’re having trouble finalizing the perfect bracket to send in to whichever sportsbook has come crashing through your television to demand you parlay your bets and become a champion and rake in the dough they promise every 90 seconds or so. I am happy to share some of my can’t-miss bracketeering tips with you:

END_OF_DOCUMENT_TOKEN_TO_BE_REPLACED

Otego geologist shares his views on an Interstate sign’s misnomer

I have been the CCS boys’ soccer coach since 1988. Every summer I start to plan for the coming fall season. Before this dream job, I had another — I spent thirteen years at Cherry Valley as their first girls’ varsity soccer coach. Starting in 1971, I was a coach of youth soccer in Oneonta. So you can see I have a passion for the sport; as a coach and as a player: high school; college (Oneonta State 68-71), men’s travel Oneonta United, National Soccer Hall of Fame Team and numerous teams in the area until 2014. END_OF_DOCUMENT_TOKEN_TO_BE_REPLACED

By Cheryl Clough • Special to www.AllOTSEGO.com

The undefeated Hawkeyes got into the scoring column first. Regulation ended with the teams tied at 1-1. In sudden death OT Colby Diamond sent a pass to Luca Gardner-Olsen who got in behind the Trojan defense and slid a shot past charging Greene goalie Jesse Ledford giving the Hawkeyes a spot in the Class C state final 4 next weekend in Middletown.

CCS Girls’ Varsity Swimmers save their best for last

CCS Girls’ Varsity Swimmers save their best for last

By JOHN HODGSON • Special to www.AllOTSEGO.com

Girls’ Varsity Swimmers closed out a championship 2021 fall season with a stellar weekend competing in state contests in Syracuse, N.Y., on November 5 and 7.

Swimmers competed in 11 events during Section 3 sectionals on November 5, with all eight team members posting ‘best times’ for the year. END_OF_DOCUMENT_TOKEN_TO_BE_REPLACED

By LISA HERSHEY • Special to www.AllOTSEGO.com

The team started the season with some inconsistent play which included an overtime loss to the combined team Milford/Laurens in the Tri-Valley Semifinals. Lead by Coach Jennifer Moore, Cherry Valley-Springfield rallied in sectionals, upsetting fifth-seed Margaretville 4-3 on October 22, in Cherry Valley. END_OF_DOCUMENT_TOKEN_TO_BE_REPLACED