The editorial that appeared in The Freeman’s Journal/Hometown Oneonta on Thursday, April 28, 2022, regarding the Otsego County Democratic Committee’s Ukraine fundraising, sparked many a reaction in my mind.

Most important of them: What an astonishing example of performative outrage, high dudgeon, and holier-than-thou-ness. I do hope that the newspaper will apply equally outraged scrutiny when any seemingly altruistic local Republican initiative comes to your attention — and then devote an equal number of self-righteous paragraphs (in this case, ten) before magnanimously allowing that “we’re no less appalled when people wrap themselves in the American flag to claim moral or small-d democratic superiority…”

We can think of no one other than Vladimir Putin, conspiracy theorists, or tin-foil-hatters who doesn’t support Ukraine these days. Otsego County has stood up large for a nation thousands of miles away, a noble testament to our region’s inherent benevolence.

This newspaper has published several reports about people doing good things on behalf of Ukrainians everywhere and, we’ll be honest, we’ve reported only after hearing about the events almost by chance. Maybe we saw a social media post or a flyer taped to a storefront and thought we could amplify the cause with a notice in our paper.

We rejected the one proactive release we’ve received to date: one dated April 4 from the Otsego County Democratic Committee announcing they had raised $5,000 to send to World Central Kitchen — that’s the group preparing hot meals for Ukrainian refugees.

A worthy cause and, well done for raising the cash. The release (now deleted from the party committee’s site, by the way), finished with this nugget: “Of course, our role as the County Party is to register Democrats, and support and elect Democratic candidates, but it’s also important that we help in non-partisan ways that make our community and world a little better. We are Democrats and we support Democracy here at home and abroad, in words and deeds.”

The make-the-world-a-little-better message, we thought, was a good one — until partisan politics reared its omnipresent head. We cringed a little at the blatant grandstanding and took a pass.

END_OF_DOCUMENT_TOKEN_TO_BE_REPLACED

In the beautiful 1979 movie “Being There,” Peter Sellers portrays a gentle and illiterate gardener who implausibly becomes a national sensation in a world gone wrong amid deep recession and winter malaise. A talk show host asks him for his outlook on the nation’s economic future. He pauses for a moment and says, “In the garden, growth has its seasons. First comes spring and summer, but then we have fall and winter. And then we get spring and summer again.”

Spring is coming. Amid worldwide havoc, and thanks to the generosity of the good people of Otsego County, there are reasons to be cheerful. Look no further than the outpouring of local support for the people of Ukraine.

The Rusty Bison ran out of spaghetti and meatballs at its March 23 pay-what-you-will event and raised more than $5,000 to send directly to Poland to help Ukrainian refugees with clothes, food, shelter, and finding jobs; the restaurant owners look to raise more on April 1 at 6 p.m. with an Open Mic and Dance Party at The Telegraph School in Cherry Valley.

Students in Edmeston Central School raided their piggy banks to raise nearly $4,000 to partner with the Village’s Rotary Club to support Ukraine.

The Susquehanna Society for the Prevention of Cruelty to Animals raised more than $10,000 – double its goal – on behalf of the International Fund for Animal Welfare, a group with “boots on the ground” in Ukraine and Poland. SQSPCA’a indefatigable Stacie Haynes said “people are risking their lives right now to ensure animals left in shelters are cared for and pets are transported with families to safety.” So important.

Ukraine’s flag flies over Village Hall in Cooperstown and the Village welcomed Aliona Yezhova and her son to raise awareness; Ms. Yezhova continues her efforts to raise donations of money and goods to send home to help her fellow Ukrainians.

Your generosity goes beyond help for Ukraine, of course — we note, for example, the students at Milford Central also emptied their pockets in a change challenge to raise money for Super Heroes in Ripped Jeans; the Leatherstocking Credit Union waived its coin-counter fees to the Milford and Edmeston schools to maximize the students’ contributions. Lenten food drives. The Lions’ Club teaming up with Otsego 2000 to help connect people to fresh food at the Farmers’ Market in Cooperstown.

The danger inherent to publishing a list like that is that we’re bound to omit the good works of other people and groups who are working just as fervently, so — we apologize in advance for not naming all of you but are just as grateful for your ongoing selflessness.

Otsego County’s traditions of local, regional, and international philanthropy take root in Edward Clark’s deep devotion to the region that continues today through the Scriven and Clark foundations. We’re rooted, too, in our own devotion to the fundamental threads that make every village, town, and city unique yet united.

Spring is coming. Major League Baseball ended its lockout and Opening Day is here. The covers are just about to come off the parking meters. Pretty soon, we’ll all be sweeping the pollen off our windshields instead of scraping off the ice.

Georgia’s parachuting spiders: can they make it this far north?

‘Newsies’ on tap for this weekend in Oneonta

‘Wabbits’ column was way off base and despicable

My friends and family are directly affected by the war in Ukraine. My sister and her two daughters had to flee Ukraine to Moldova, and then to Austria. My brother-in-law had to stay behind in the country and we do not know if he will remain alive. 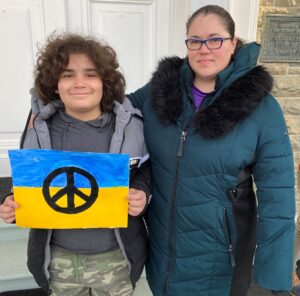 Thank you to the Cooperstown community for standing with Ukraine. Please do what you can. If you can pray or keep people affected by the conflict in your daily thoughts – do that. Educate yourself and be aware of the situation – awareness is a first step. If you are a business owner or know one – maybe a fundraiser can be organized. Maybe you can write to your local senator or President Biden. Let us continue doing our part. Let’s be tolerant of the increase in gas prices and support the U.S. government decision to help Ukraine.

Dear neighbors, again thank you for all your support. Your efforts are valuable, felt, and greatly appreciated.

Please refer to the link below. It comprises extensive amounts of updated sources and examples of outreach and donation shortcuts to well-known and long-standing organizations:

The organized effort led by the local Ukrainian churches and the UCCA (Capital District branch of the Ukrainian Congress Committee of America): https://www.518ukrainians.com/ 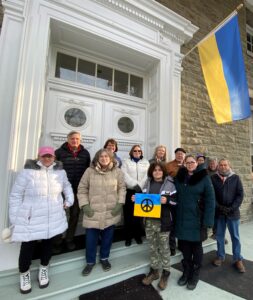 Cooperstown’s Board of Trustees approved a plan to raise Ukraine’s flag over the entrance of Village Hall on Main Street and on Friday, March 11, Aliona Yezhova and her son, Joshua Echavarria, a sixth-grader at Cooperstown Central School, joined village officials to thank them for the connection. “We just want to say thank you to everyone in Cooperstown and the region who have been so supportive,” Ms. Yezhova said. Her brother-in-law currently serves in the reserves for Ukraine, stationed in Kyiv. We’ll have a full story and more photos in our next edition, out March 17.

After fighting in Afghanistan for 20 years and spending more than 1.5 trillion dollars and accomplishing nothing but starvation for millions and political instability in the country, the withdrawal was the correct step.

What did the United States learn from this terrible mistake, which cost the American taxpayer $300 million a day for 20 years? It seems that our current government had not learned anything to avoid making the same mistake again in Ukraine.

Let’s stop this warmongering rhetoric in the US. A diplomatic solution to the crisis is of utmost importance at this juncture. Let’s cease the belligerent talk and sit down at the diplomatic table to start talking about the amount of money and the number of innocent lives that could be saved on both sides. Let’s learn from all the past wars. War only brings destruction as revealed by human history. END_OF_DOCUMENT_TOKEN_TO_BE_REPLACED

Editor’s Note:  This “caution” was included in the transcript: CAUTION: “A Memorandum of a Telephone Conversation  (TELCON) is not a verbatim transcript of a discussion. The text in this document records the notes and recollections of Situation Room Duty “Officers and NSC policy staff assigned to listen.and memorialize the conversation in written form as the conversation takes place. A number of factors can affect ‘the accuracy of the record, including poor telecommunications connections and variations in accent and/or interpretation.  The word “inaudible” is used to indicate portions of a conversation that the notetaker was unable to hear. “