ONEONTA—Hill City Celebrations’ New Year’s Eve extravaganza at the Foothills Performing Arts and Civic Center was a huge success. “Holbrook-Wade School of Dance and Harmony Martial Arts were a wonderful complement to our professional entertainment. It was great to see the children and families celebrating together,” said Carol Mandigo, event coordinator. “We haven’t had a First Night since 2019 and it’s the first time we’ve tried to produce two events at the same time, the Festival of Lights and First Night at the Foothills. Everyone pitched in to make it possible…our sponsors, the businesses, and organizations that created beautiful displays in the park, and the community who supported us all the way. We’re very grateful and looking forward to next year!” Above, Raelyn Sinstack of Oneonta spreads her lighted wings during the First Night New Year’s Eve party.

FROSTBITE 5K—Noon. Get out on the last day of the 2022 for this fun run, walk, or stroll through frost-biting temperatures. This year will be held in honor of John Haven, who was the area ugly sweater fashionista and a fixture at the Oneonta YMCA. Race will begin from the Foothills Performing Arts and Civic Center and finish in front of the Oneonta YMCA at 20-26 Ford Avenue, Oneonta. (607) 432-0010 ext. 207 or visit oneontafamilyymcafrostbite5k.itsyourrace.com/event.aspx?id=9985

FIRST NIGHT —5 to 8 p.m. Don’t miss the return of First Night Oneonta. Celebrate the coming new year with an evening of fun for the whole family, featuring a talent show with 1000+ in prize money. Foothills Performing Arts Center, Oneonta. Visit hillcitycelebrations.org for the full schedule of events.

NEW YEAR’S EVE PARTY—7:30 p.m. to 12:30 a.m. Join the Super Heroes Humane Society to ring in the new year with an evening of dancing, music from the Roundhouse Rockers, raffles, door prizes, appetizers, and a champagne toast at midnight. Music begins at 8:30. Tickets are $25/person. Party held at the 6th Ward Athletic Club, 22 West Broadway, Oneonta. (607) 441-3227 or visit facebook.com/superheroeshs/

END_OF_DOCUMENT_TOKEN_TO_BE_REPLACED

The reception, which took place just before sundown ahead of the festival lighting, celebrated Matsuo and Bolstad, longtime and beloved community practitioners who served the greater Oneonta area for nearly 40 years. Remarks were offered by Mayor Mark Drnek and family physician Dr. Benjamin Friedell, among others.

END_OF_DOCUMENT_TOKEN_TO_BE_REPLACED

ONEONTA – First Night Oneonta has announced a name change to Hill City Celebrations and a new collaboration with the Otsego County Chamber of Commerce. This expansion and re-branding better reflects the year-round events and activities First Night organizes for the community.

The mission of First Night has always been to provide healthy, alcohol-free activities and events for families, the announcement reads. Community partners include LEAF Council on Alcoholism and Addictions, Five Star Subaru and dozens of generous local foundations, individuals, and businesses. Hill City Celebrations also works closely with the City of Oneonta, SUNY Oneonta, Hartwick College and Bassett Healthcare Network to produce events such as the Oneonta Festival of Lights, First Night at the Foothills, and the Hometown 4th of July.

END_OF_DOCUMENT_TOKEN_TO_BE_REPLACED

Hill City Celebrations, formerly First Night Oneonta, is partnering with the Otsego County Chamber of Commerce in the planning of this year’s Festival of Lights.

END_OF_DOCUMENT_TOKEN_TO_BE_REPLACED

Against All Odds, Festival Takes Flight

As dusk settled over Neahwa Park, Carol Mandigo wasn’t sure what to expect when she flipped the switches to turn on the Festival of Lights.

What she saw were cars lined up as far as Main and River streets, waiting their turns to be driven around the 37 displays of holiday lights and decorations set up around the park.

“I couldn’t believe it,” Mandigo said. “I had no idea it was going to be as popular as it was.”

The event – it began last Friday, Dec. 18, and continues every night from dusk until 10 p.m. through Sunday, Jan. 3 – was a spin-off from the traditional First Night celebration, which, along with the Hometown Fourth of July, was cancelled due to COVID-19.

“Everyone on the board was really sad that we had to cancel,” she said. “We got together to decide if we should do something for New Year’s or just bag the whole year. No one would blame us if we didn’t put on an event.”

But Mandigo had seen the Lights on the Lake event in Liverpool, the Syracuse suburb, and although it cost “hundreds of thousands of dollars” to have it professionally put together, she pitched the board an idea: “What if we asked the community to put up displays?”

The board agreed, but she still wasn’t sure if the community at large would embrace the idea. “Then it would be lame, and that would be terrible for us,” she said.

She reached out to Ben Guenther at Five Star Subaru first to see if he would sponsor a display. “He was all about it,” she said. “And once I knew he was backing us, I knew we had something special.”

The Otsego County Chamber of Commerce sent out a call for displays in its newsletter, and soon, the emails started pouring in. “I was shocked,” she said. “I really thought we were going to have to do it all by ourselves.”

Several of the displays were dedicated to John Hayen, who in 2017 hung 23,500 lights in his home and yard on Tilly Avenue, surpassing the record set by Chevy Chase’s Clark Griswold in “National Lampoon’s Christmas Vacation.” He passed away in November.

There were logistical challenges to overcome, including how to power each display without tripping circuits. “I’ve been living out in the cold from morning until night,” said Mandigo. “We had to figure out how to power everybody, how to run all these cords and how to protect the displays.”

And then came the snow.

Overnight snow on Thursday, Dec. 17, dumped 29 inches of powder on the city, burying all but the tallest displays. “People were worried that it wouldn’t work,” she said. “But no one ever said to postpone it.”

Instead, the groups came out to shovel out their displays. “It was a miracle,” she said. “We were still tripping circuits, but by 3:30 p.m. on Friday, we were ready to go.”

The event opened at dusk with entertainment, including Cosmic Karma Fire, Mike the Juggler and Santa Claus.

“Santa went to each car and asked the kids’ names and what they wanted for Christmas,” she said. “And the kids were so excited to see him.”

Even Mandigo donned a set of light-up wings to welcome visitors over the weekend. “I had so much fun seeing the kids faces light up,” she said. “That’s what First Night is all about.”

END_OF_DOCUMENT_TOKEN_TO_BE_REPLACED 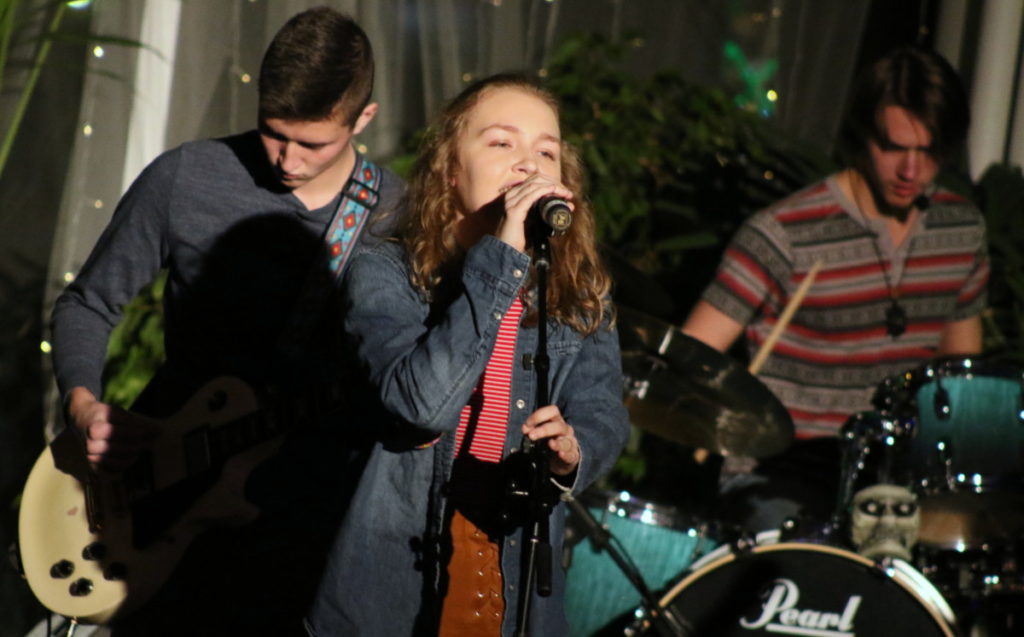 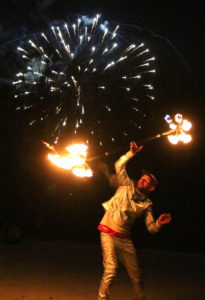 Above, members of OHS’s Uncle John and the Turtle Ella Pawkett, Ben Airhart and Gabe House belt out classic rock tunes in the Foothills atrium to close out the evening. Right: fireworks light up the night sky as Jessie Morville, spins fire with Cosmic Karma Fire outside of Foothills Preforming Arts Center as Otsego County heads into 2018. (Ian Austin/AllOTSEGO.com) 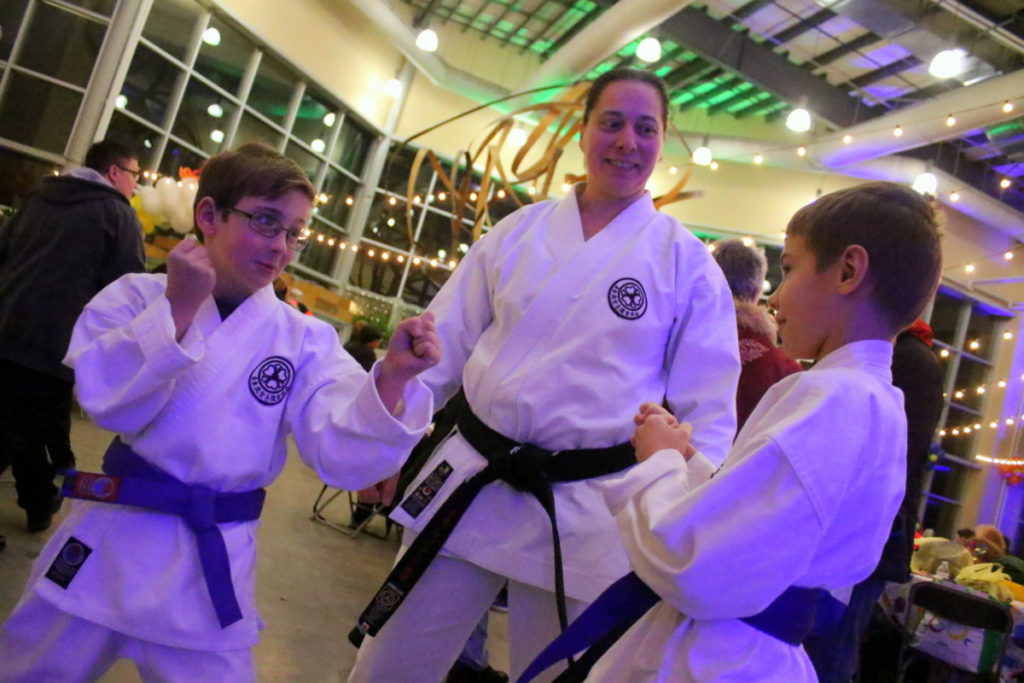 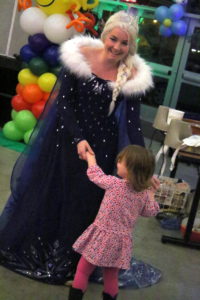 Above, Sensei Brooke Chilson, Oneonta, center, helps two of her students Oneonta’s Ethan Risley and Noah Harding, prepare for their demonstration this evening as they represent Harmony Martial Arts as part of the entertainment line-up at the 2018 First Night celebration at Foothills. At right, Raelyn Sinstack, Oneonta, dances with The Hill City Ice Queen to the sounds of the Realtime Dixieland Band in the mezzanine.  Entertainment is ongoing throughout the building until the stroke of midnight, with a fireworks show at 10:18pm.(Ian Austin/AllOTSEGO.com)