Trump says no one could have predicted coronavirus. But two administration officials said in 2019 that the threat of a pandemic kept them up at night.

Tragedy strikes: A man dies days after hundreds exposed to coronavirus walked around a major airport

New York state will take unused medical equipment and give them to hospitals in need, governor says

Indoors: Fauci says all of US should have stay-at-home orders

Dr. Fauci: Why the peak is coming, despite social distancing

No work: Pandemic has been catastrophic for house cleaners and nannies

EPL suspended indefinitely, players to be asked for wage cut

Dr. Nicole Saphier: Coronavirus – Deaths rising due to chronic illness, obesity should alarm us all

US Women's Open in Houston postponed until December

Biden pushes for another stimulus amid devastating jobs reports

America Together: Missouri small town rallies around family who lost everything in fire

Close Until April 19, At Least

Gardner this morning announced her Department of Motor Vehicles Offices here and in Oneonta and the clerk’s office in general will be closed until at least April 19.

END_OF_DOCUMENT_TOKEN_TO_BE_REPLACED

SHE SAYS CUOMO ‘FORCES’ SYSTEM ON HER

By JIM KEVLIN • Special To www.AllOTSEGO.com

COOPERSTOWN – The state’s “Green Light” Law that went into effect over the weekend is all about registering potential Democratic voters, Otsego County Clerk Kathy Sinnott Gardner said in an interview.

“They are making a mockery of our voting system,” said Sinnott Gardner Tuesday, Dec. 17, as she was organizing her staff to administer a law she disagrees with.

As of press time, only one undocumented resident had shown up locally – Monday, at the Oneonta office – and was told the office was not yet prepared to issue licenses under the new law.

Before the “Green Light” was turned on, a U.S. citizen applying for a driver’s license would present documentation that would be scanned and sent to state Department of Motor Vehicles headquarters in Albany, where it would be part of that driver’s file. The processing clerk would also make a notation on the application.

Under the new law, Sinnott Gardner’s clerks must accept a valid foreign passport or driver’s license on faith. “If we can’t read their birth certificate, they can translate it themselves and tell us what it is,” said DMV Clerk Lynn Blessin. The document may not be scanned as has been standard practice to date, nor is any notation on the application permitted.

When an applicant then approaches the pay window, a question on a screen asks, “Are you a citizen of the U.S.?”  According to guidelines from the state DMV, “If a customer answers ‘yes,’ our computer system is required by law to transmit the application to the applicable board of elections for processing.”

It continues, “Under the Green Light Law, DMV staff are expressly precluded from asking a standard license applicant about their citizenship or lawful presence … Importantly, staff … may not use their perceptions of the customer, or anything else, as the basis to interfere with the customer’s voter application.”

Sinnott Gardner, who has been among a core of 26 county clerks opposing the new legislation, has developed a system that will allow her eight-person DMV staff to process the undocumented residents, also called illegal immigrants.

Following the Niagara County clerk and others, three of the eight will be trained to process “Green Light” applications, which will be scheduled 9:30-11:30 a.m. only Wednesdays and Thursdays, and only in main local DMV office in Cooperstown.  The applications will be accepted, beginning Thursday, Jan. 2.

“We are being forced to do this by Governor Cuomo,” said Sinnott Gardner. “We have to follow the law.”

In recent months, several county clerks went to court to object to the law, which was passed last summer by the newly Democratic-dominated state Legislature. But the final one pending, by Rensselaer County Clerk Frank Merola, was dismissed Friday, Dec. 13.  Another, filed by Erie County Clerk Mickey Kearns, also lost in U.S. District Court, but he is appealing, Sinnott Gardner said.

“Beginning Monday, the law will help make our roads safer, our economy stronger, and will allow immigrants to come out of the shadows to sign up as legal drivers in our state,” she said. “We expect all public officials to comply with the law, and, as the state’s attorney and chief law enforcement officer, I will continue to vigorously defend it.”

On Monday, They Must Issue

COOPERSTOWN — Otsego County Clerk Kathy Sinnott Gardner has joined 26 other county clerks who today urged Governor Cuomo and DMV Commissioner Mark Schroeder to delay implementing the state’s Green Light Law until next Oct. 1 “for the safety and security of all New Yorkers.”

The new law, which allows people in the U.S. illegally to obtain New York State driver’s licenses, is due to go into effect Monday.

In a statement, the county clerks issued a statement declaring the state DMC “failed to provide regulations that would ensure the integrity of the identification process” of applicants seeking driver’s licenses.

The protesting clerks including all officers of the state Association of County Clerks.

The ability of states to regulate who drives on their roadways dates back to the Model T with the 1916 Supreme Court decision regarding Frank J. Kane v the State of New Jersey, which found the state within its right to issue registration fees.

States were further supported in regulating who drives in 1999 when the Ninth Circuit of the U.S. Court of Appeals, in the case of Donald S. Miller v the California Department of Motor Vehicles, ruled that there is no “fundamental right to drive.”  And again on June 7, 2007, when New York’s highest court upheld the state DMV’s right to require Social Security numbers (SSN) from driver-license applicants or a letter of ineligibility from the Social Security Administration, in the case Cubas v Martinez.

By statute, the NYS DMV has required driver-license applicants to supply their Social Security numbers since 1995. DMV also accepts a letter of ineligibility from the Social Security Administration (SSA) along with Department of Homeland Security (DHS) documentation from anyone ineligible for a SSN.

As stated in the Cubas v Martinez decision, the policy was not the result of a post-September 11 panic over immigration; the internal document adopting the policy is dated Sept. 6, 2001. This anti-fraud policy was validated in 2002 with the DMV’s Social Security verification program uncovering massive amounts of fraud, according to testimony by then-DMV Commissioner Martinez to the NYS Assembly Transportation Committee on Aug. 19, 2004.

The current legislation, now signed into law (A3675B & S1747B), known as the “Green Light Bill,” disregards history and case law, attempting to rewrite the law in the interest of a few at the expense of many:

OTHER COUNTIES MAY JOIN IN

COOPERSTOWN – Another option for county clerks to challenge the state’s “Green Light” law opened up this week, as Erie County Clerk Michael “Mickey” Kearns went to federal court to block enforcement until its constitutionality can be determined.

The “Green Light” law, due to go into effect Dec. 14, would require county clerks to issue driver’s licenses to undocumented residents/illegal aliens, and to rebuff any efforts by ICE (U.S. Immigrations & Customs Enforcement) to access their records.

Otsego County Clerk Kathy Sinnott Gardner and many of her colleagues learned of the lawsuit in Syracuse Monday, July 8, at a state Association of County Clerks’ strategy session on how to go forward.

END_OF_DOCUMENT_TOKEN_TO_BE_REPLACED

COOPERSTOWN – The Erie County clerk, Michael “Mickey” Kearns, is expected to file suit today to block the state’s “Green Light” law, according to attendees at the state Association of County Clerks strategy session yesterday in Syracuse.

Sinnott Gardner said she was unsure whether Otsego County would play any role in the suit, either as a “friend of the court” or more fully.

END_OF_DOCUMENT_TOKEN_TO_BE_REPLACED

COOPERSTOWN – With only one Democrat supporting the 8-3-3 vote, the Otsego County Board of Representatives today sent a resolution to the state Assembly opposing the so-called “Green Light Bill” allowing illegal immigrants to obtained drivers’ licenses.

Voting aye were Republicans Ed Frazier of Unadilla, Kathy Clark of Otego, Peter Oberacker of Schenevus, Dan Wilber of Burlington, Keith McCarty of East Springfield and board Chair David Bliss of Cooperstown/Town of Middlefield, as well as Meg Kennedy, C-Mount Vision.  Andrew Stammel, Town of Oneonta, was the sole Democrat joining them.

Voting nay were Democrats Gary Koutnik, Danny Lapin and Adrienne Martini, all of Oneonta.  Abstaining were Democrats Michelle Farwell of Morris, Andrew Marietta of Cooperstown/Town of Otsego, and Liz Shannon of Oneonta

END_OF_DOCUMENT_TOKEN_TO_BE_REPLACED

GOP – And One Democrat Gather For Pancake Feast

GOP, And One Democrat, 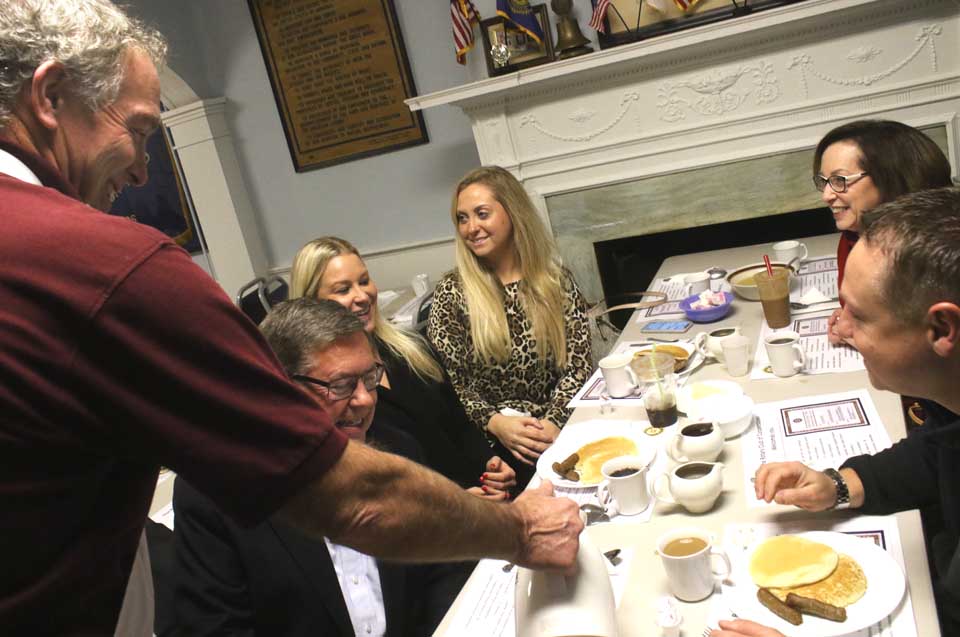 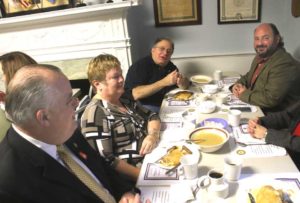 Dave Bliss, Republican chair of the Otsego County Board and a Rotarian, pours coffee for state Sen. – and candidate – Jim Seward, R-Milford, a few minutes ago at the traditional Cooperstown Rotary Club Election Day pancake breakfast at the Vets’ Club. With the senator are, from his left, daughter-in-law of two months Kelly Ann, daughter Lauren, wife Cindy and son Ryan. Seward is being challenged today by Democrat Joyce St. George, Margaretville area. Inset, Democratic kingmaker Richard Sternberg joined the Republican table that includes, at left, county Sheriff Richard J. Devlin, Jr. and County Clerk Kathy Sinnott Gardner; at right is Republican County Chair Vince Casale, who is also a top adviser to Republican Marc Molinaro’s campaign against Gov. Andrew Cuomo.  Devlin is being challenged by Republican Bob Fernandez, a retired state trooper who appears on the Democrat line.  Sinnott Gardner is unopposed.  “I like these people,” said Sternberg.   The polls are open across Otsego County until 9 p.m.  (Jim Kevlin/AllOTSEGO.com)

Since the coronavirus state of emergency was declared, has your opinion of Governor Cuomo