ONEONTA – Doris L. Miller, 88, passed away May 23, 2017 at the Bridgewater Rehabilitation in Binghamton.

She was born July 15, 1928, in Oneonta, the daughter of Fred and Nellie (Sargeant) Leonard.  Doris grew up in Laurens where she graduated from Laurens Central School.

END_OF_DOCUMENT_TOKEN_TO_BE_REPLACED 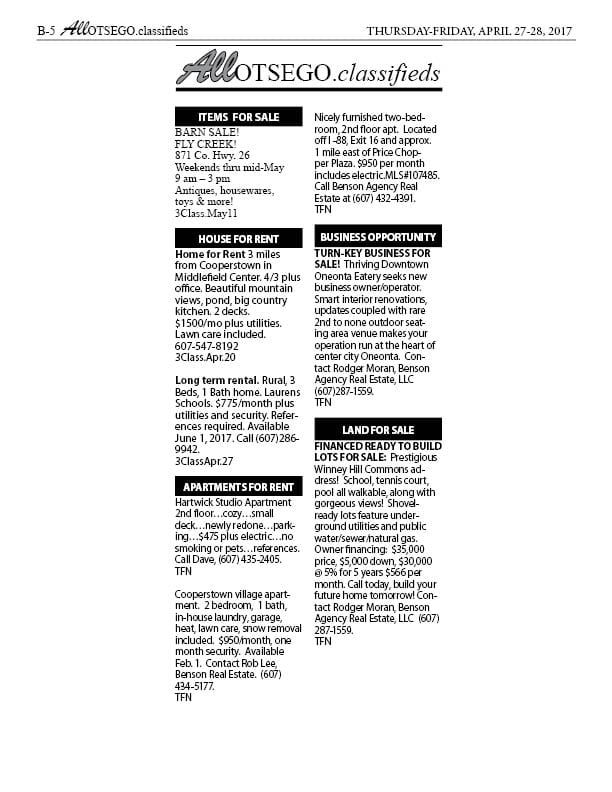 LAURENS – It took off like a house on fire.

“I got called in at 4:30,” Fire Chief Justin Hill recounted today, the morning after flames ripped through a village home at dusk Thursday afternoon.  “I was driving from West Oneonta and I could already see the column of smoke.”

“The fire started on the second floor in the rear,” said Hill, surveying the smoking ruins. “The layout of the building made it very difficult to attack the fire. We entered through the back door but there was so much fire in the stairs we couldn’t get up them.  That’s when we knew we had to go at it from the exterior.”

END_OF_DOCUMENT_TOKEN_TO_BE_REPLACED

Richard was born in Oneonta on Sept. 30, 1949, the son of the late Ralph and Florence (Brown) Stimpson.

END_OF_DOCUMENT_TOKEN_TO_BE_REPLACED

The Wind Beneath My Kite

The Wind Beneath My Kite…

LAURENS – A 9-year-old boy was airlifted to Albany Medical Center after an ATV crash last night near the Oneonta Municipal Airport.

State Police responded to a call at 8:58 p.m. that the boy had overturned an ATV on a trail on private property near the airport, which is in the Town of Laurens.  He was not wearing a helmet, and was airlifted to Albany Medical Center, where he was treated for minor injuries.

The investigation is ongoing.

After Tiff At Playground

LAURENS – A woman was arrested after threatening to kill a mom after a fight at a playground outside of Laurens Central School.

Megan R. Holbrook, 36, was arrested by State Police last night after an investigation into a verbal dispute at the park on Main Street.  Police determined that Holbrook had told children who were using Nerf guns to leave the park, and when their mother returned to ask why, Holbrook allegedly became enraged and, while posturing in a threatening manner, threatened to kill the woman.

END_OF_DOCUMENT_TOKEN_TO_BE_REPLACED

Born May 13, 1926, in Bridgeport, Conn., he is the son of the late Matias and Virginia Arbas. Jim spent his childhood on the family farm in Fairfield, Conn., with his sisters Josephine, Anna and his brother Herman.

END_OF_DOCUMENT_TOKEN_TO_BE_REPLACED

‘Coach’ To Many, Pat Grasso Was ‘Pop Pop’ To Grandkids

‘Coach’ To Many, Pat Grasso

Was ‘Pop Pop’ To Grandkids

Editor’s Note:  While recognitions of Pat Grasso have appeared  in several publications since the revered Laurens coach and athletic director passed away on Tuesday, the family released this official obituary this morning.

Pat was born July 24, 1933, in Schenectady, the son of James William and Rose (Mazzotti) Grasso.  Pat graduated from Mont Pleasant High School in 1951 and graduated from Ithaca College in 1957.  Pat was a standout athlete who played football in high school and college.

He married the love of his life, Marilyn Margaret McLaud, on Aug. 18, 1962, at St. Mary’s Catholic Church in Oneonta.

END_OF_DOCUMENT_TOKEN_TO_BE_REPLACED

Arrangements are with Lewis, Hurley & Pietrobono Funeral Home in Oneonta, which is preparing the official obituary.

Meanwhile, here are excerpts from the resolution introduced by state Sen. Jim Seward, R-Milford, on Grasso’s retirement in 2009, that details his career and accomplishments.

“A native of Schenectady, New York, Pat Grasso graduated from Schenectady High School and attended Ithaca College; he played sports in both high school and college and was a highly regarded football player.

END_OF_DOCUMENT_TOKEN_TO_BE_REPLACED

OTSEGO – A Town of Otsego Highway Department worker was killed Monday morning when he was struck by a falling tree.

Adam C. Burgess, 27, of Laurens, was working on Bissell Road in the Town of Otsego on Monday, Nov. 23 as part of a three-man crew cutting and clearing roadside trees when he was accidentally struck by a falling tree.  He was transported to Bassett Medical Center in Cooperstown and pronounced deceased at 10:40 a.m. by Dr. Luis Oceguerra from injuries consisting of a skull fracture.

Otsego County Coroner James Dow advised that no autopsy would be performed.

LAURENS – Martin J. Bloodnick, 86, who retired to Laurens after a 33 year career with the Long Island Railroad, passed away peacefully at home Tuesday, Tuesday, Nov. 10, 2015.

Martin was born on Nov. 20, 1928, in Ozone Park, the son of late Francis and Margaret Bloodnick (Rydholm). He married Dorothy A. Barratt on Oct. 8, 1950, in Christ the King Catholic Church in Queens.

At the age of 17, Martin joined the Navy at the end of World War II and was deployed to Guam in the 151st Seabees as an aviation mechanic. After returning home, he married and he began his employment as a metal worker on the Long Island Railroad.  Tinsmith by trade, Martin was a craftsman with metal and enjoyed working on projects with his children and grandchildren over the years.

END_OF_DOCUMENT_TOKEN_TO_BE_REPLACED

LAURENS – Patricia Susan Ryan, 61, Laurens, who worked at Popp Butterfly Conservatory in Oneonta with sister, passed away on Wednesday Aug. 26, 2015.

She was born on Aug. 24, 1954, in Forest Hills, Queens, the daughter of William J. Ryan and Gloria T. Ryan.  Patty graduated from Unatego High School and attended college at Hofstra University and the Women’s Technical Institute in Boston.

She had a curious nature and love of travel, which led her all around the world with Semester at Sea. Patty loved the outdoors and walking through the woods with her other “son” Rocky.

END_OF_DOCUMENT_TOKEN_TO_BE_REPLACED

LAURENS – For the past 70 years, he’s been William Brindle of Laurens, working at Bendix, driving cars for Country Club Automotive, or on the job at the Hanford Mills Museum, (plus doing wedding photographs, hunting with wife Betty, and developing his woodworking skills.)

This morning, he was transported back to March 28, 1945, where, as Staff Sgt. Brindle of Company G, First Battalion 16th Infantry Regiment, part of Patton’s First Infantry Division, he and his unit “didn’t move” as five German divisions counterattacked after losing control of the Ludendorff Bridge at Remagen, the last intact span over the Rhine.

In a ceremony in front of the American Legion Post here, Col. Carlton Cleveland of the New York Army National Guard pinned a bronze star on Brindle’s original uniform, along with a European-African Middle Eastern Campaign Medal.  (His wife Betty said, except for shortening his trousers an inch, and using a safety pin to give him a little more space in the collar, the uniform still fit.)