State Route 205 in the town of Oneonta has had two fatal accidents in the past two months and is considered by many to be a dangerous road for bicyclists and pedestrians.

The road stretches past the Cooperstown All Star Village, where there is a lot of pedestrian traffic going across the road to the baseball field and is a high traffic area.

The latest fatal accident on Route 205 occurred on Sunday, Aug. 15, near Country Club Road. No arrests have been made yet.

Another accident occurred on Saturday, July 3, involving a hit-and-run driver, which led to the arrest of a Mount Vision man. Michael Goodspeed, 32, was charged with second degree vehicular manslaughter and leaving the scene of an accident. END_OF_DOCUMENT_TOKEN_TO_BE_REPLACED

ONEONTA – Citing Governor Cuomo’s restrictions on overnight camps and other social-distancing measures, Cooperstown All-Star Village has announced that the remainder of the 2020 season has cancelled.

“We feel it will not have the same wonderful feeling, filled with memories that will last a lifetime,” Patton wrote in a statement on the camp’s website. “It’s important for us to deliver a safe and memorable experience for all in attendance. After considering all the possible alternatives we have regrettably made the decision to cancel the 2020 Season.”

END_OF_DOCUMENT_TOKEN_TO_BE_REPLACED

WEST ONEONTA – Week 2 of the All Star Village 2020 season – June 13-19 — has been cancelled, the youth-tournament venue’s proprietor, Marty Patton, announced this morning.

“While the COVID-19 pandemic continues to impact our country at large, regrettably, we will not be able to deliver the ultimate Cooperstown experience your team and families have been looking forward to,” Patton wrote to Week 2 families across the nation.

END_OF_DOCUMENT_TOKEN_TO_BE_REPLACED

For Good Of All, Hope Marty Patton Right

For Good Of All,

It may turn out Marty Patton made the right call, delaying opening of his Cooperstown All Star Village, the youth baseball tournament camp in West Oneonta, in hopes of salvaging at least some of the 2020 season.

Things are happening so quickly.

With this week’s Glimmerglass Fest cancellation, pretty much all of the major summer activities have been cancelled or delayed – mostly notably, of course, Derek Jeter’s July 26 Induction and the 2020 season of Patton’s competitor, Cooperstown Dreams Park.

Meanwhile, the coronavirus threat seems to be easing day to day, from New York City to Otsego County where, for now, there’s almost nothing left.

Given where were are, it’s possible COVID-19 may be just an unhappy memory locally in a few weeks.

The pacing factor for Patton is where his teams are coming from: Detroit and Houston and Tucson and wherever the disease’s arrival came later.

When and where are questions Patton’s struggling with, as he should be. Let’s hope facts break his way, for the benefit of all of us.

All Star Village Holds On

All Star Village Holds On

By JIM KEVLIN • Special To AllOTSEGO.com

Even the Baseball Hall of Fame is waiting in the dugout for now. For now, that leaves one Otsego County baseball institution in the game this summer: Cooperstown All Star Village on Route 205 here.

This week, he was sending letters cancelling play to the 70 teams sched-uled for what would have been the first week of the 2020 All Star Village season, beginning June 6.

Patton, who was born and raised in Oneonta, took a markedly different approach to Dreams Park’s, the other youth tournament baseball camp.

Dreams Park, based in Salisbury, N.C., simply posted a message on its website Friday, March 20, announcing it was cancelling its season, to the dismay of restaurants and merchants in Oneonta and

Cooperstown, as well as hotels and dozens of property owners who rent out accommodations annually to hundreds of baseball families.

Patton said he enjoys the season, as do the kids, but he also took his neighbors and fellow businesspeople into account in making his decision.

Given his roots and Brenda’s, one of Oneonta’s Colones, “We could never walk out on the community or those wonderful people who are coming from all over to visit.”

On March 22, the weekend of Dreams Parks’ decision, he announced the week-to-week strategy. “Our reason behind this was, simply: we didn’t know enough back then (about how the COVID-19 threat was going to play out) to pull the plug,” he said.

So far, Patton said, “we’ve only had a handful of cancellations. It’s amazing. We’ve had many teams coming in June request to come in July or August. It tells you the strength of the Cooperstown brand.”

During their week, All Star Village teams visit the Hall of Fame and shop the souvenir and equipment shops on Baseball Mecca’s Main Street. “We also promote The Farmers’ Museum; it’s fabulous,” said Patton, who founded his tournament venue in 1996, three years after Lou Presutti Jr. started Dreams Park.

“We’re fortunate to have what we have in our community,” he said.

Some have said Dreams Park needed to decide early on whether or not to open,because it needed to hire staff.

Patton said, for him, that’s not a problem. “Seventy-five percent of our staff comes back every year,” he said.

All Star Village Cancels Week I Of 2020 Season

Will Happen As Long As There’s Risk

ONEONTA – Cooperstown All Star Village has cancelled its youth baseball tournament for the week of June 6, Week One of its 2020 season, proprietor Marty Patton said this morning.

A letter to the 70 teams scheduled for the first week will be going out later this week.

“To the local community, I just say this: Brenda and I have lived here most of our lives.  We would never risk our community or those wonderful people who are coming from all over to visit,” Patton said.

END_OF_DOCUMENT_TOKEN_TO_BE_REPLACED

To our Cooperstown All Star family of players, coaches, umpires, guests and employees

The health and safety of Cooperstown All Star Village players, coaches, umpires, guests and employees is our highest priority. As we continue to actively monitor developments related to coronavirus (COVID-19) we want to assure you that Cooperstown All Star Village is taking all necessary health and safety precautions in accordance with the CDC (Centers for Disease Control and Prevention) and New York State health officials for our players, coaches, umpires, guests and employees.

In an effort to carry on the Cooperstown experience that our players, coaches and umpires have planned for and fund-raised for several years. We have made a decision regarding the 2020 tournament (assuming that our Nation is going through this self imposed quarantine) four weeks in advance of each week. Starting the first week in May (leaving family’s, players, coaches and umpires a full month before the first week tournament begins), we will let everyone know via our website, Facebook and emails to coaches whether we will open or cancel that week, obviously if we are open the first week the other weeks will be open as well. Our goal is to give our players the Cooperstown experience they have planned for and fund raised for.

For those of you wondering how we will handle your refund, should we cancel a week or the entire season we will give you two options, All teams will receive a 100% refund or the option of future participation. This policy remains the same for our on site hotel guests. As stated we will not be making that decision until the first week in May in an effort to give our players the chance to participate in what they have worked so hard for.

The most important thing we can do as Americans is remain calm, follow the rules set forth by your state and our federal government and remember we are all in this together. We will come through this!

Our community is ready to welcome all of our baseball families with open arms. God bless you all and God bless America and the World.

Praying for us all,

WEST ONEONTA – Marty Patton, owner of Cooperstown All-Star Village, today announced the youth-baseball park has put together a flexible plan that may allow it to function through the 2020 season.

“We have decided to make a decision regarding the 2020 tournament… four weeks in advance of each week,” Patton wrote in a public letter.  Players’ families and coaches will then be advised if the tournaments will happen the weeks they are registered.

END_OF_DOCUMENT_TOKEN_TO_BE_REPLACED 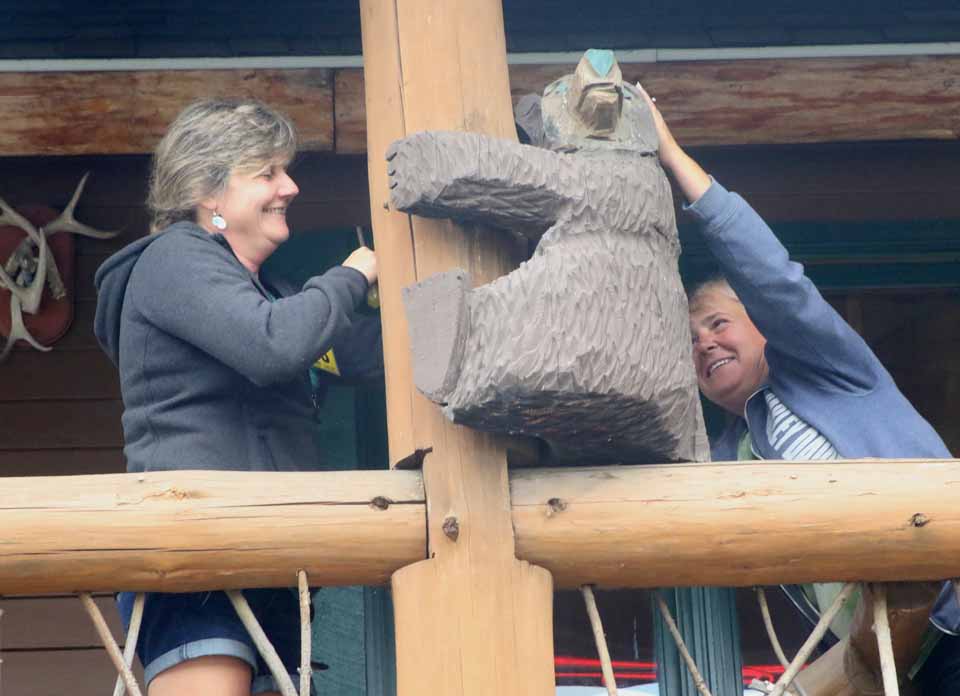 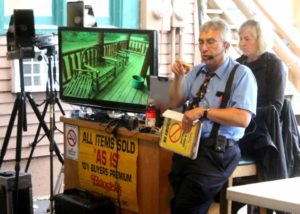 Above, Ramona Schafsteck, Cherry Valley, with the help of friend Nancy Manganaro, detaches one of two decorative bears she bought yesterday as Brzostek’s Auction Service sold off the contents of the Adirondack-style Christoper’s Motel, many of the items hand-crafted. Adjacent Christopher’s Restaurant burned in April, and, according to talk at the auction, owner Marty Patton’s plan is to raze this structure, clearing a sizable parcel of coveted Southside Oneonta real estate for redevelopment. At right, auctioneer Ernest Brzostek, assistant by wife Martha, auctions off a room’s-worth of content at a time, for prices ranging from $200 for all the contents to $800-plus. (Jim Kevlin/AllOTSEGO.com)