Man to give away two tickets to NFC Championship

Patient in hospital since start of pandemic released

93-yo violently attacked by mask-wearing men

Schumer: Pelosi will deliver article of impeachment to Senate on Monday

Candace Cameron Bure responds to fans upset over who she follows: 'I follow left and right'

CASTLETON LAUDS: Daniel Bosma, and Mallory Timpano, both of Cherry Valley, were named to the Castleton University President’s List for the fall semester of the 2018-19 academic year.

Collector Lives On In Collection,
Remains Of ‘Thousands’ Of Items

Paulette Cotter pauses among hundreds of  cameras in her Town of Milford home, part of her late husband’s collection.  She estimates Alan, who collected and traded toys, cavern memorabilia and other antiques, bought and sold “thousands” of cameras over 45 years.  Above is a stereopticon slide of the young couple.

Alan Cotter sought out the collector – all these years later, wife Paulette remembers him only as “Kent” – and bought a miniature camera.  For the next two years, “we collected a camera a day,” she said.When the newlyweds arrived in Santa Barbara, Calif., in 1968 – he had enrolled in the Brooks Institute of Photography – there, in a window of a Main Street bank, was a “huge display” of multiple antique cameras. 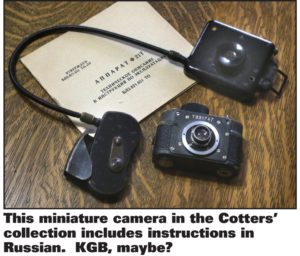 When he graduated from Brooks in 1969, “it was ridiculous, economy-wise.  Grads were pumping gas; he didn’t want to do that,” said the wife.

Thus began a life of buying and selling cameras, Daguerreotype images, Stereopticon slides – you name it – even “magic lanterns,” like the Zoetrope, a pre-film animation device that provided exotic scenes and sights the general public wouldn’t have seen otherwise.

Based in Santa Barbara until 1984, when the couple moved to Morris, Alan would travel to collectors’ conferences on the East Coast, picking up choice examples en route and back.

During the 1970s, the couple produced three national camera-collector directories that sold for $8 apiece.  “There were no computers, it was all by hand on a typewriter,” said Paulette, who was a teacher by day and typist by night.

She also produced “Reflecting On Photography, 1839-1902, The Cotter Collection,” with a Daguerreotype of Alan on the cover. The photographer died young, having inhaled too many mercury fumes, the same thing that killed Louis Daguerre, the French inventor of the process, Paulette said.

Over a lifetime, the Cotters – Alan passed away in 2015 – bought and sold “thousands” of cameras and related items, said the wife.

On stopping by, “I was amazed,” he said.

He ended up borrowing a rare two-lens Stereopticon camera, the type used by Oneonta photographer William Meremess in the 1870s, to round out the exhibit.  (Wright is installing three panels in the City Hall lobby this week.)

The Cotters both grew up on Long Island, 25 miles from each other – he in Babylon, she in Merrick.  But they met at a Baptist summer camp in Freehold when she was 14, he was 12.  “We used to play ping-pong together,” she said.

After high school, she headed off to Wheaton College in Illinois.  Two years later, who showed up but Alan.  The two sang in the college choir together, but “he didn’t recognize me. We all hung around together after choir to eat together and play ping-pong,” she remembered.  “It wasn’t until November that I dawned on him who I was.”

When she graduated two years ahead of him, they married. After another year at Wheaton, they headed out to Brooks, and the collecting began.  For two years in the late 1970s, Alan also curated the college’s photography museum. 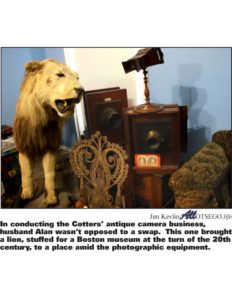 “He was interested, he got me interested,” said Paulette.  “He was the collector, but he always ran it past me.  It was something we did together.”

In the 1980s, with their two sons growing – Brady Cotter, now OHS track coach and Earth Science teacher, and Ben Cotter, the Southside chiropractor – the couple moved back east so the boys would know their grandparents and extended family.  They bought a house, sight unseen, in Morris.

There, they opened an antique store, but it was a block off the main road.  So in the 1990s, they bought an old Federal-style farmhouse right on Route 28 at Milford Center, renovated it and built a shop out front, increasing usable space from 2,200 to 3,700 square feet.

Today, photo equipment dominates, but not exclusively, as Alan would swap cameras for other intriguing objects, including a stuffed lion from a Boston museum and a stuffed alligator prone atop a cabinet.

He also dabbled in perhaps 20 other types of collectibles, from board games, to toys, to souvenir plates of tourist-destination caverns like Howe’s in Schoharie County.

But cameras do abound, and much of the variety, Paulette attests, were developed for private detectives – and even spies.  One camera was designed to attach to the photographer’s chest, with the lens fitting through a button hole, and activated by a switch in the photographer’s pants pocket.

Another camera looks like a tool box, with the lens camouflaged on its front face.  “They were designed to look like other things,” Paulette said.  Another hand-sized camera bears Russian markings; KGB
standard-issue, perhaps?

Other cameras are on pivots, allowing a panoramic shot of, for instance, high school classes.  Sometimes you see the class wag twice – he ducked behind his classmates and appears on the right and left of the lineup.

Another pivot allows a 360-degree image.

And there are related items, such as a photographer’s brocade couch, where all sides fold down to allow variety in poses.

For his 30 years in Otsego County, Alan was also choir director at Oneonta’s Main Street Baptist Church. The son of a pastor, “he loved the Lord,” he wife explained.

Diagnosed with cancer in 2011 and given nine months to live, he battled the disease with homeopathic methods, surviving until March 29, 2015.  Still, he certainly lives on amid his collection.

“He never found an end to collecting,” said Paulette, “because he always found something new – something he had never seen before.” 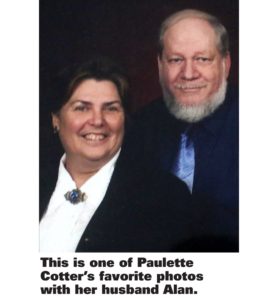 END_OF_DOCUMENT_TOKEN_TO_BE_REPLACED

By LIBBY CUDMORE • From The Freeman’s Journal & Hometown Oneonta

MILFORD – When Kerry Hall took her son, J.T., then 10, into Bassett Hospital, it was a struggle to get him to communicate with his doctors. “He was scared, he wouldn’t let the doctors near him,” she said. “He was just sitting in a corner.”

But Wade Bostwick, veteran Bassett security guard, knew what to do.

“He came in and sat on the floor with him and asked him about what he liked,” the mother said. “He brought him a stuffed animal and a Pepsi, and they chatted about video games and fishing. After Wade was able to bring him out of his shell, he allowed himself to be treated. Wade was a lifesaver.

END_OF_DOCUMENT_TOKEN_TO_BE_REPLACED

Rain Or Shine, Relay Marches On

Ring In The Spring

END_OF_DOCUMENT_TOKEN_TO_BE_REPLACED

One Of Coldest Weekends Ideal 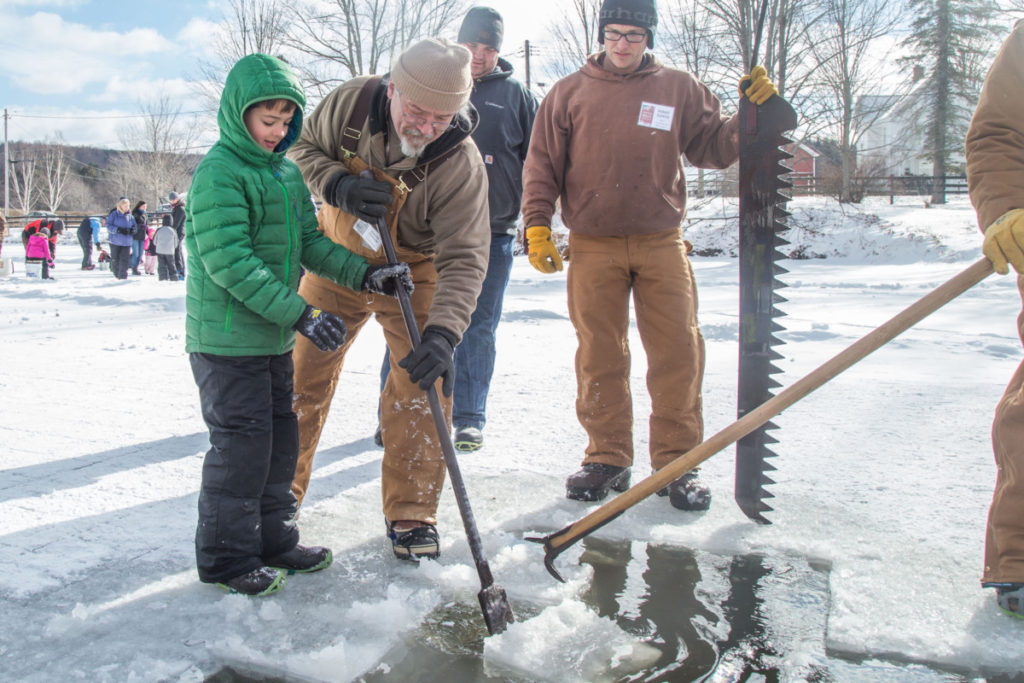 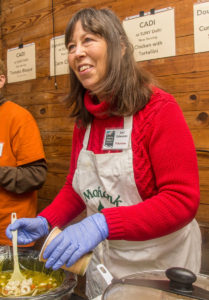 In it’s 29th year, the annual Hanford Mills Museum’s Ice Harvest Festival attracted hundreds of local families to East Meredith Saturday, eager to participate in the old fashioned ice harvest. Pictured above, Josh Coleman, 8, Windsor, helped cut ice blocks from the pond, pushed the blocks up a ramp on the bank, and pulled them on a sled to the ice house. Helping Josh in the photo is Milford resident Marvin Zachow. Besides the ice harvest, guests could observe ice sculptures, ride on a horse drawn wagon, and watch a live blacksmith demonstration. When guests got cold, Lori Solenstein, Milford, pictured at right, and many other volunteers were ready to serve soup which had been donated by many different local businesses. (Parker Fish/AllOTSEGO.com)

ONEONTA – The funeral is this Thursday, Nov. 30, for Doris W. Oliver, 94, of Oneonta, who retired from the Oneonta City School District.  She passed away Saturday, Nov. 4, 2017.

Born and raised in Milford, Doris was a graduate of Milford High School.  She was married for 70 years to Leland Arthur Oliver, who passed away on Nov. 10, 2011.

Doris worked for Bendix Corp. for over 25 years, then Oneonta schools for 12 years, then retired.   Since 2015, she had lived in Patterson, Calif., with her youngest son, Michael, and his wife Mary Jane, who cared for her.

END_OF_DOCUMENT_TOKEN_TO_BE_REPLACED

MILFORD – An Oneonta man was arrested after state police received a tip that a Springbrook employee was stealing from the company.

Michael G. Graziano, 34, Oneonta, was arrested after police were advised of theft at Springbrook’s Milford campus. An investigation determined that Graziano had allegedly falsified business records from January to September 2017 to steal over $7,000 in pay.

END_OF_DOCUMENT_TOKEN_TO_BE_REPLACED

She was born Oct. 19, 1931, on Crumhorn Mountain in the Town of Maryland, the daughter of Lewis and Lillian (Wright) Virtell.

END_OF_DOCUMENT_TOKEN_TO_BE_REPLACED 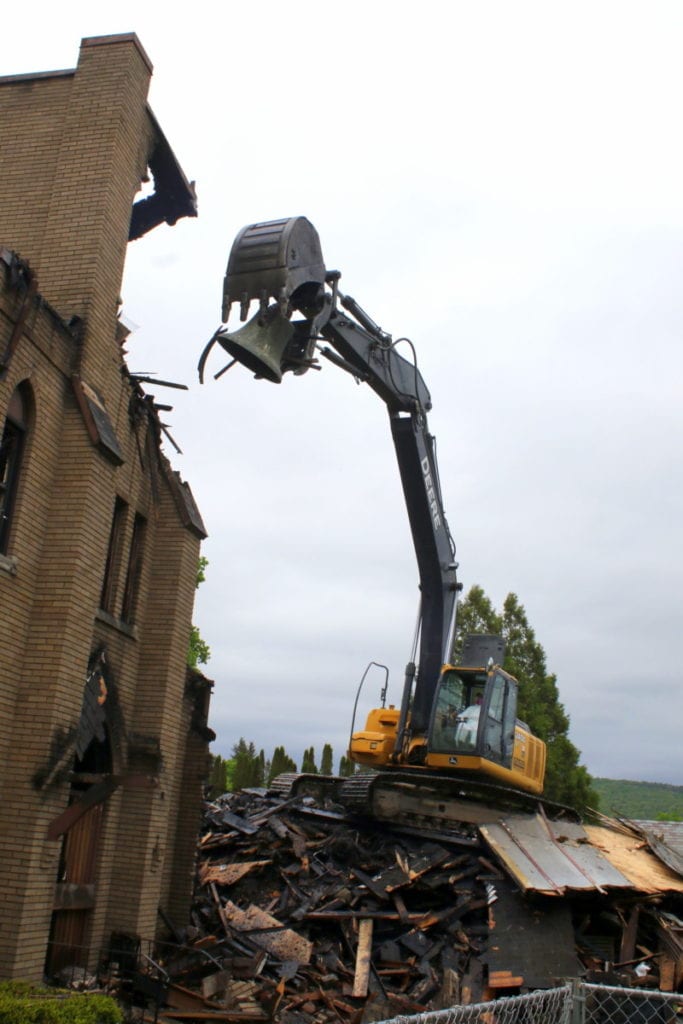 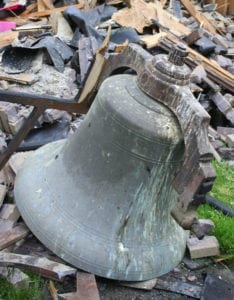 Onlookers held their breaths as Eastman Associates’ Mike French uses his excavator to delicately lift the bell from the wobbling remains of the Milford United Methodist Church’s bell tower during today’s demolition. French removed two walls of the tower to expose the bell well enough to grab it. As it was lifted out over the rubble, it rang three times,  the chimes echoing across the valley. Those in attendance cheered and applauded as the bell was placed safely on the ground. (Ian Austin/AllOTSEGO.com)

He was the husband of the late Jane (Schempf) Sherman. He was born on April 21, 1927 in Middleburgh, son of the late Lee and Edith (Fryar) Sherman. He graduated from Milford Central School in 1944. Gil served in the Army Air Corps in the Pacific during the World War II Army of Occupation as a radio man on a B-17.