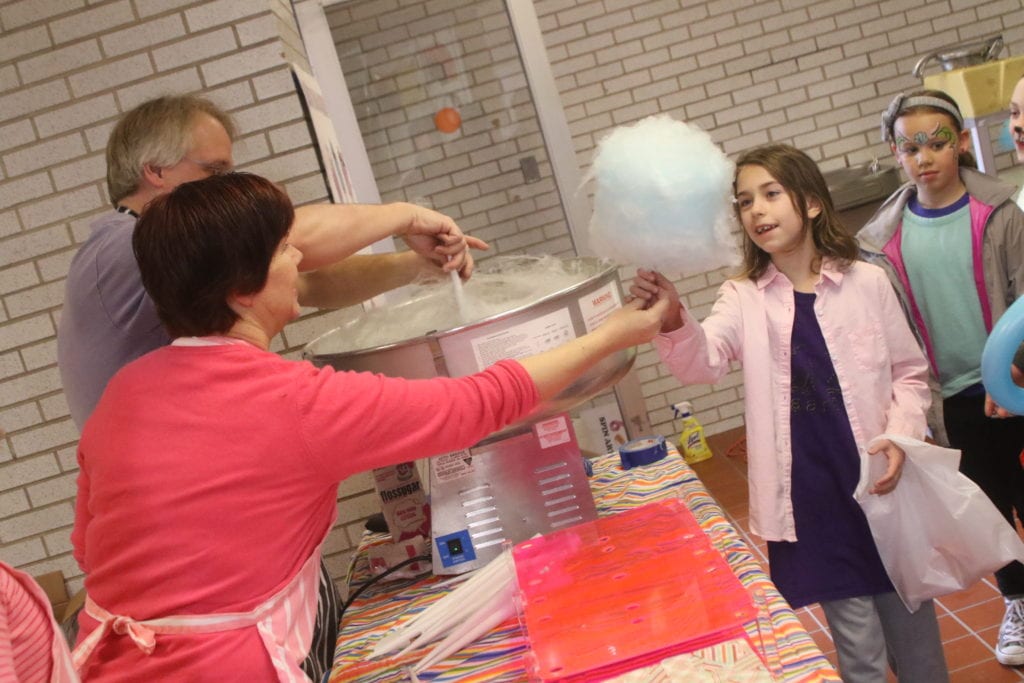 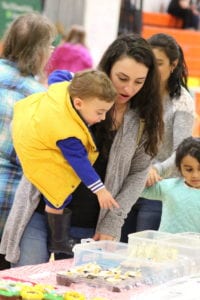 Tim Chapin and Gabrielle Bailey hand out cotton candy – an Crayon Carnival favorite – to Chloe Arnold, Cooperstown, during the annual event this afternoon at Cooperstown High Schoo’s Bursey Gym. “This is out fourth year doing it and we love it!” said Chapin. “We had a cotton candy machine and we figured we might as well share!” Visitors could also play games, win prizes, enjoy face painting and balloon animals, as well as potting plants and learning how to test for water purification in local streams. At right, Stefania Aguzzi and son Gregory look over the confectionary delights at the food table.(Ian Austin/AllOTSEGO.com)

END_OF_DOCUMENT_TOKEN_TO_BE_REPLACED

Then it rose to 50 points. 52. 57 for Cooperstown with 30 seconds remaining. With eight seconds on the clock, Utica brought the score to 57.
Then Jesse Furnari sank the final two baskets to bring the Cooperstown boys to 61 points and win their 11th Section III championship, their third in four years.
“I’ve got goosebumps,” said Jack. “My voice is weak from screaming like crazy.”
The younger Lambert credited the long drills his dad made him run with their endurance out on the court. “We knew we had it,” he said. “We knew we could come back with that energy.”
“And when you had a kid like Ryan Lansing, his energy is limitless,” said John.
Following the game, Ryan was named to the all-tournament team, while Jack was named Most Valuable Player.
And dad John, in his first-year as head coach, was named Coach of the Year. “I didn’t know they would announce it there,” he said. “When I heard my name, I couldn’t believe it. I was so flattered.”
But they weren’t the only ones returning to Cooperstown with a championship. END_OF_DOCUMENT_TOKEN_TO_BE_REPLACED

Growing up, John Lambert always had a ball in his hand.
“My dad, Paul Lambert, coached Cooperstown basketball, 1958-64,” he said. “And I want to do the same thing for my son.”
The CCS Redskins are now the Hawkeyes, but some things stay the same.
Like his father, John Lambert is coaching the CCS team. END_OF_DOCUMENT_TOKEN_TO_BE_REPLACED 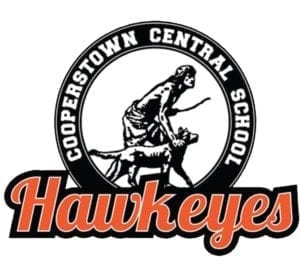 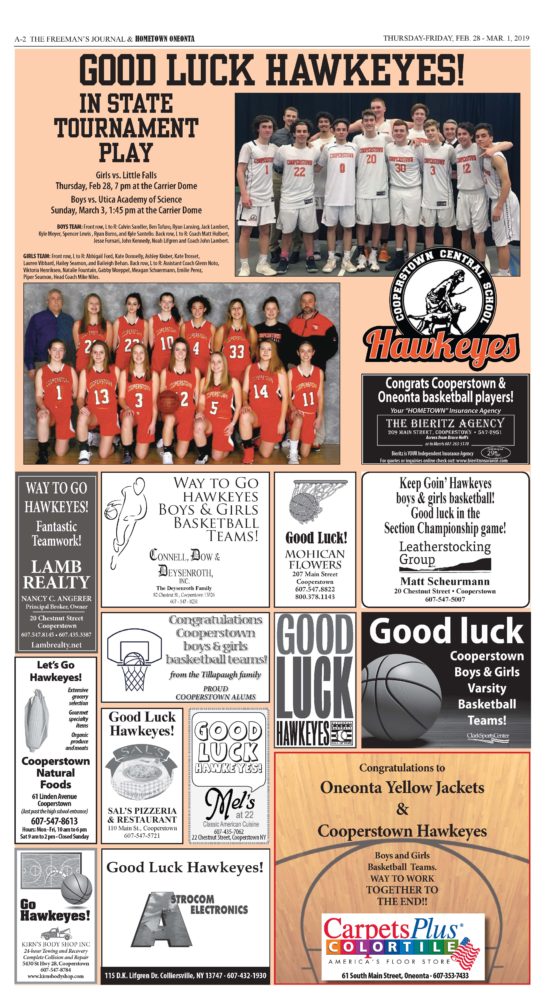 PARADE – 5 p.m. Showcase your Halloween best with Cooperstown Central School band leading the way. Followed by cider and treats at Cooperstown Chamber of Commerce, then trick-or-treating at around Cooperstown. Start at Cooper Park, Cooperstown. 607-547-9983 or visit cooperstownchamber.org/halloween-2/

END_OF_DOCUMENT_TOKEN_TO_BE_REPLACED

HAPPENIN’ OTSEGO for WEDNESDAY, MAY 9

HAPPENIN’ OTSEGO for WEDNESDAY, MAY 9

END_OF_DOCUMENT_TOKEN_TO_BE_REPLACED

Pies For The Holidays

END_OF_DOCUMENT_TOKEN_TO_BE_REPLACED

K-12 ART & MUSIC NIGHT – 5-7 p.m. An exhibit of the art by Cooperstown students. The library will also be open with a craft program for children and a preview of the Library’s Summer Program. Cooperstown Art Association. Info, www.cooperstownart.com

END_OF_DOCUMENT_TOKEN_TO_BE_REPLACED

HAPPENIN’ OTSEGO for MONDAY, MAY 8

HAPPENIN’ OTSEGO for MONDAY, MAY 8

HIP-HOP OPERA – 7 p.m. See the world premier of “Stomping Grounds,” a show that blends hip-hop and opera to tell a story about survivors of gentrification, the disruption of sacred land, and the fracturing of tradition and history by contemporary realities. SUNY Oneonta Center for Multicultural Experience. Info, glimmerglass.org/festival/second-stages-2017/stomping-grounds/

END_OF_DOCUMENT_TOKEN_TO_BE_REPLACED

DEBATE – 7 p.m. The Candidates for the CCS Board of Education will debate each other and answer questions from the audience. Hosted by the League of Women Voters. Jr./Sr. Library, Cooperstown High School. Info, www.cooperstowncs.org/league-of-women-voters-to-hose-board-of-education-candidates-debate/

END_OF_DOCUMENT_TOKEN_TO_BE_REPLACED

MUSICAL – 7 p.m. Bring the family out for this presentation of Disney’s “High School Musical.” Bring school supplies to donate and half the proceeds of the show go to the Family Service Association “Back to School” drive. Oneonta High School Auditorium, 31 Center Street, Oneonta. Info, www.oneontacsd.org