Pelosi, Democrats celebrate Cheney after her ouster, say GOP must 'take back' their party

END_OF_DOCUMENT_TOKEN_TO_BE_REPLACED

An investigation by James’ office concluded the administration undercounted coronavirus-related deaths at nursing homes by as much as 50 percent, the New York Times reported today.

Salka said this warrants the state Legislature pulling the governor’s emergency powers, and he urged his colleagues to do so.

END_OF_DOCUMENT_TOKEN_TO_BE_REPLACED

ALBANY – Governor Cuomo had a lot of good news on the anti-COVID fight in his daily update delivered overnight. beginning with: “New York State is ready, willing and able to administer 100,000 vaccine doses a week.”

Next week’s allocation is about to arrive, although the governor didn’t get into anticipated doses.  “I’m hopeful that the Biden Administration will take steps to increase production and shorten the anticipated timeline,” he said.

END_OF_DOCUMENT_TOKEN_TO_BE_REPLACED

Of Quick End To Crisis

ALBANY – At today’s briefing, still underway, Governor Cuomo dashed expectations he might outline an end to the State of Emergency lockdown, or that it would happen anytime soon.

He did announce Michael Bloomberg, the billionaire and former presidential candidate, will lead a task force that will guide a multi-state reopening, following a ramp-up of coronavirus testing across New York State.

END_OF_DOCUMENT_TOKEN_TO_BE_REPLACED

The End May Be Near! Listen Live To Briefing

The End May Be Near!

ALBANY — Governor Cuomo Tuesday said New York will restart the state’s economy on a regional basis, a sharp turn from his earlier statements that implementing that type of plan could lead people to travel in large numbers to locations where businesses have reopened, the Albany Times Union is reporting.

For Inventory, Just In Case

By ELIZABETH COOPER • Special to www.AllOTSEGO.com

Upstate communities can breath a sigh of relief.

National Guard troops will not be taking ventilators from Upstate hospitals for use in downstate hospitals hit hard by coronavirus, the infection that causes COVID-19.

In an executive order signed today, Governor Cuomo backtracked on statements made Friday about issuing an executive order to requisition medical supplies, including 20 percent of unused ventilators, and having the National Guard help ensure compliance.

Instead, he issued an executive order that hospitals provide an inventory of such equipment and that the state “may shift any such items not currently needed, or needed in the short term future by a health care facility to be transferred to a facility in urgent need.”

END_OF_DOCUMENT_TOKEN_TO_BE_REPLACED

Cooperstown Dreams Park’s decision to cancel the 2020 season was only announced Friday.

Two days before, county Treasurer Allen Ruffles, who chairs the county Emergency Task Force, had called Mike Walter, Dreams Park COO, and received no inkling such an economy-shattering decision was in the making.

It’s not locked in concrete.  It’s not too late to turn it around.

Four men may be able to make it happen.  Congressman Antonio Delgado, D-19, and state Sen.  Jim Seward, R-Milford, should approach Gov. Andrew Cuomo and ask him to intervene with Dreams Park COO Mike Walter to keep the door open to a Dreams Park season this summer.

END_OF_DOCUMENT_TOKEN_TO_BE_REPLACED

Thursday, he announced portions of retail shopping malls, as well as amusement parks and bowling alleys in the four states would close by 8 p.m. last evening. Earlier in the week, Cuomo limited crowd capacity for social and recreational gatherings to 50 people.

END_OF_DOCUMENT_TOKEN_TO_BE_REPLACED

Cuomo To Business: Send Half Of Your Employees Home

Send Half Of Your

Governor Cuomo today ordered New York State’s business to require half of their employees to work from home.

That extends an order that all in-state local governments have been enacting this week.

The governor also ordered all malls and bowling alleys to close at the fight against Coronarivus continues.

ALBANY – Governor Cuomo announced moments ago that the SUNY System will close all campuses – presumably, including SUNY Oneonta – next Thursday, March 19.

The schools will continue the remote learning model for the remainder of the spring semester, Reuters reported.

Cuomo also said the number of coronavirus cases in New York state has increased to 212 from 173 the day before.

Governor Cuomo visited the White House yesterday but was unable to persuade President Trump to allow New Yorkers back in the federal “Trusted Travel” program.

Acting Homeland Security Secretary Chad Wolf told reporters that Cuomo and Trump held a “productive meeting.” He called the relationship between the state of New York and the federal government an important one but said it “has been made difficult by the unilateral actions of New York State regarding the sharing of critical security information with DHS.”

Trump Nudges Up In NYS

Governor Cuomo’s job performance rating plummeted in the last month, and U.S. Sen. Chuck Schumer also saw a significant drop in how voters feel about him, according to a Siena Poll of New York State voters released yesterday.

END_OF_DOCUMENT_TOKEN_TO_BE_REPLACED

Editor’s Note: Governor Cuomo issued this statement after Amazon announced Thursday, Feb. 14, it is backing out of the 27,000-job HQ2 planned for Long Island City. 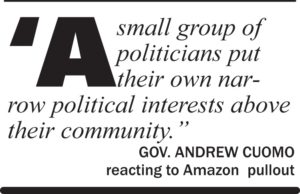 Amazon chose to come to New York because we are the capital of the world and the best place to do business.
We competed in and won the most hotly contested national economic development competition in the United States, resulting in at least 25,000-40,000 good-paying jobs for our state and nearly $30
billion dollars in new revenue to fund transit improvements, new housing, schools and countless other quality of life improvements. END_OF_DOCUMENT_TOKEN_TO_BE_REPLACED

Editor’s Note: With Democrats taking control of the state Senate Jan. 1, 2019, Governor Cuomo’s party now controls the state Legislature and his office for the first time in years, prompting him not to wait of the traditional State of the State message, but to issue a first-100-days “Justice Agenda,” a call to action for the state’s Democrats.  Here are the 20 points:

►Cut Middle-Class Taxes while Fighting to repeal SALT, the federal limits on state and local deductions.

►Protect Quality, Affordable Health Care by ensuring the health exchange and coverage of pre-existing conditions will be protected at state level.

►Ensure Education Equity by
increasing funding for poor schools.  (A coalition of public educations is seeking a $2 billion increase)

►Pass a Dream Act, to ensure a higher education system that opens the door of opportunity to everyone.

►Ensure Clean, Safe Drinking Water for All, by investing in our water infrastructure and clean our water for our children and our children’s children.

►Improve Our Democracy, by enabling voting by mail, early voting, same-day and automatic voter registration, synchronizing federal and state elections, and make ►Election Day a state holiday to ensure as much participation as possible.

►Increase Trust in the Democratic System, by closing the LLC loophole, banning corporate campaign contributions, overhaul our campaign finance system and ending outside income for lawmakers.

►Protect Public Sector Unions, by expanding protections for public sector labor unions at the local level, and to ensure workers have labor rights in the gig economy.

►Pass the Child Victims Act, to ensure those who abuse our children are  accountable criminally and civilly.

►Legalize Adult Use of Recreational Marijuana, ending the disproportionate criminalization of one race over another by regulating, legalizing and taxing adult use of recreational marijuana.