Ukraine Wins Back Golden Treasures at Center of Dispute With Russia

ART BY THE LAKE – 10 a.m. – 4 p.m. Join artists of upstate New York to celebrate the beauty of nature and Otsego Lake. On show will be pastels, watercolor, oil, acrylics, photography, and many more mediums with demonstrations throughout the day. On the lawn of the Fenimore Art Museum, Cooperstown. 607-547-1400 or visit www.fenimoreartmuseum.org

END_OF_DOCUMENT_TOKEN_TO_BE_REPLACED

HARTWICK – Deborah Jean Masin, a devoted and faithful Christian, went to be with her Lord Tuesday night, August 3, 2021, following her unexpected death at her home in Hartwick on the 15th anniversary of her mother’s passing. She was 67.

Born July 19, 1954, on Long Island, Debbie was one of four daughters of Edward F. and Helen Elizabeth (Wahrer) Masin.

In the 1960s, Debbie and her family moved to upstate New York and settled in Westford. Debbie graduated with honors from the Andrew S. Draper Central School in Schenevus with the Class of 1972. She later resided in Hartwick where she has lived ever since.

She had a steadfast devotion to the Lord, and was associated with Community Bible Chapel in Toddsville.

END_OF_DOCUMENT_TOKEN_TO_BE_REPLACED 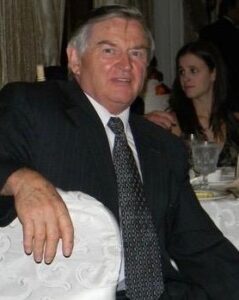 Walter Fistrowicz, 80, of Hartwick, passed away unexpectedly Monday August 2, 2021 at his home.

Walter was born in Starahowice Poland on July 29, 1941 the son of the late Stanley and Izabella Fistrowicz. In addition to his parents, he was predeceased by his loving wife Mercedes on January 16, 2016.

END_OF_DOCUMENT_TOKEN_TO_BE_REPLACED

The other buildings may be used for wine storage, but “what was really attractive to them was the space,” said Haynes.  “We have backyards here, bordering on (Oaks Creek), that are gorgeous.  Very quiet and tranquil.”

The SQSPCA is building a new $5 million animal shelter about a half-mile north on Route 28, and is expecting to have a grand opening there this spring.

HAPPENIN’ OTSEGO for SATURDAY, MAY 16

BIRD COUNT – All Day. Get out, while maintaining social distance, to see how many different bird you can spot to report to the Delaware-Otsego Audubon society. All experience levels welcome. Visit www.facebook.com/DelawareOtsegoAudubonSociety/ for info.

END_OF_DOCUMENT_TOKEN_TO_BE_REPLACED 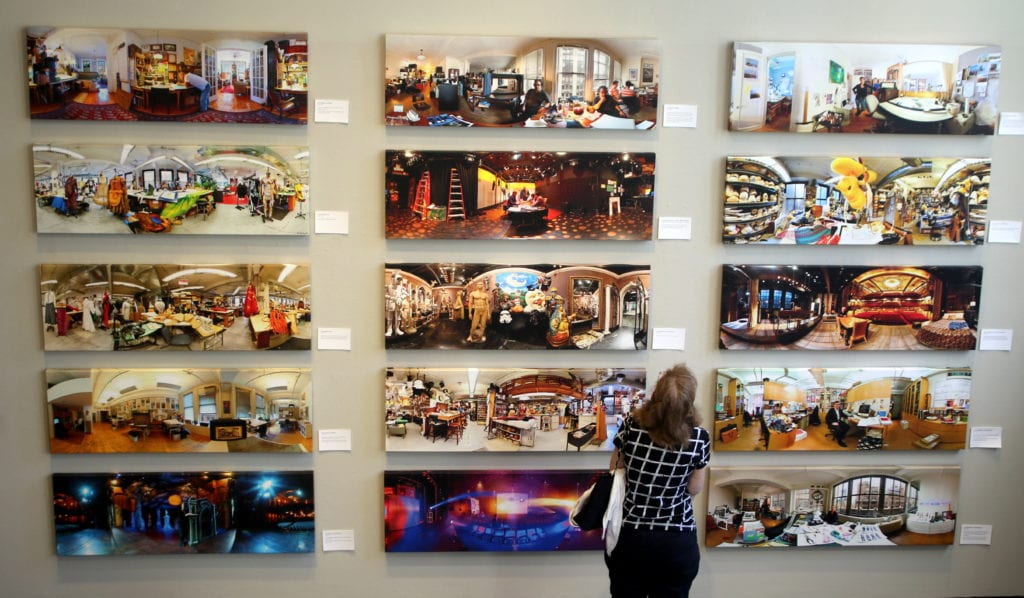 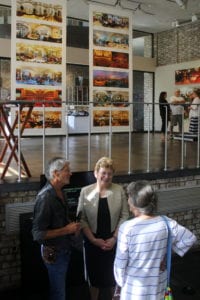 Firefighters and competitors raised objections Tuesday, Jan 8, at a public hearing on a Hampton Inn & Suites planned in Hartwick Seminary.
Hartwick Fire Company #2 pointed out it lacks a ladder truck necessary if the four-story building were to catch on fire. END_OF_DOCUMENT_TOKEN_TO_BE_REPLACED

‘Knowledge’ Is Our Future

‘Knowledge’ Is Our Future

This week’s Tom Morgan column on the facing page, and former DEC Commissioner Mike Zagata’s column last week capture the Upstate dilemma: Upstate is rebounding more slowly than any other area of the country.
First, let’s look at local bright spots.
• Custom Electronics in Oneonta is planning a futuristic 250-job production line making self-recharging batteries.
Andela Products, the Richfield Springs glass recycler, is likewise looking to expand. And Corning’s Oneonta plant is investing $11 million to ensure 150 jobs for the next 15 years.
• As or more important, as Spectrum dithers, Hartwick-based Otsego Electric Cooperative keeps expanding its broad-band ambitions, as the county Board of Representatives was told last month. The PT boat may outmaneuver the aircraft carrier.
• Even today, as the Otsego Chamber of Commerce and Senator Seward’s Workforce Summit was told last week, the challenge isn’t so much new jobs as finding people to fill existing jobs. RNs, code writers and CDL drivers can start tomorrow.

• What’s more, Hartwick College and SUNY Oneonta, Bassett and Fox Hospital, plus thriving Springbrook provide a solid economic base.
• To top it off, county Treasurer Allen Ruffles reports the county’s tax rate, thanks to vibrant tourism, is the lowest among the state’s 67 counties. It’s been low – but THE lowest!
•
All this is good. What’s lacking is a future: new and better kinds of jobs and salaries to keep our young people here and bring in new ones, and
a vision to get us there.
At that Workforce Summit – 80 people packed The Otesaga’s Fenimore Room Wednesday, Oct. 31 – the indefatigable Alan Cleinman, the Oneonta-based consultant to the national optometry sector, provided that vision:
“The future is knowledge-based industry” Cleinman declared. “The future is not industry.”
Knowledge workers: “software engineers, physicians, pharmacists, architects, engineers, scientists, design thinkers, public accountants, lawyers, and academics, and any other white-collar workers whose line of work requires the one to ‘think for a living,’” is how Wikepedia defines it.
In constant national travels, Cleinman has visited such boomtowns as Boise, Idaho, and Bozeman, Mont. – places truly in the middle of nowhere that embraced “knowledge-based industry” and are thriving.
He estimated Hartwick and SUNY Oneonta have 75,000 living graduates and create 1,500 new ones a year, many of whom would no doubt love to relive positive college experiences here and, while at it, make a living.
Cleinman’s idea is to collaborate with the colleges on a marketing campaign to bring some of these people back – a one-percent return is 750 professionals. And to raise
a $1 million venture-capital fund to help them do so.
Senator Seward immediately pledged to form a task force to pursue the “Come Home to Otsego County” campaign, plus a “Stay Home” campaign. Contacted later, Hartwick President Margaret Drugovich also expressed support.
•
In recent weeks, we’ve seen the deepening of a county rift that could stop any forward movement short: economic developers versus no-gas, no-way, no-how adherents.
Otsego 2000, the formidable and well-funded Cooperstown-based environmental group, has laid the groundwork to sue Otsego Now’s economic developers and the City of Oneonta if plans for a gas-compression station goes forward.
A “knowledge economy” requires some energy – a million-square-foot office building would require 5,800 gallons of propane a day to heat, Otsego Now’s Jody Zakrevsky estimated – but considerably less than manufacturing.
No-gas, no-how may not be feasible. But a “knowledge economy” may allow a balanced energy strategy that is palatable all around.
Otsego 2000 President Nicole Dillingham herself expressed considerable interest in Cleinman’s idea.
If it and other environmental groups could move from always “no” to occasionally “yes,” that would be good all around.
•
In short, Cleinman’s right on.
Bozeman, Boise and other knowledge economies got where they are by embracing four qualities: ingenuity, educational resources, money and
quality of life, he said.
“We have them all in Otsego County,” the proud native son from Gilbertsville declared. “What better place to live than in this amazing county?”
What better place indeed? Fingers crossed. Let’s see where it goes.

HAPPENIN’ OTSEGO for SATURDAY, MAY 5

HAPPENIN’ OTSEGO for SATURDAY, MAY 5

END_OF_DOCUMENT_TOKEN_TO_BE_REPLACED

He was born on Aug. 1, 1956, in Oneonta, son of the late Clayton and Bessie (Houck) Bullis. He  graduated from Franklin Central School.

END_OF_DOCUMENT_TOKEN_TO_BE_REPLACED

XNG Truck Breaks Down On 205 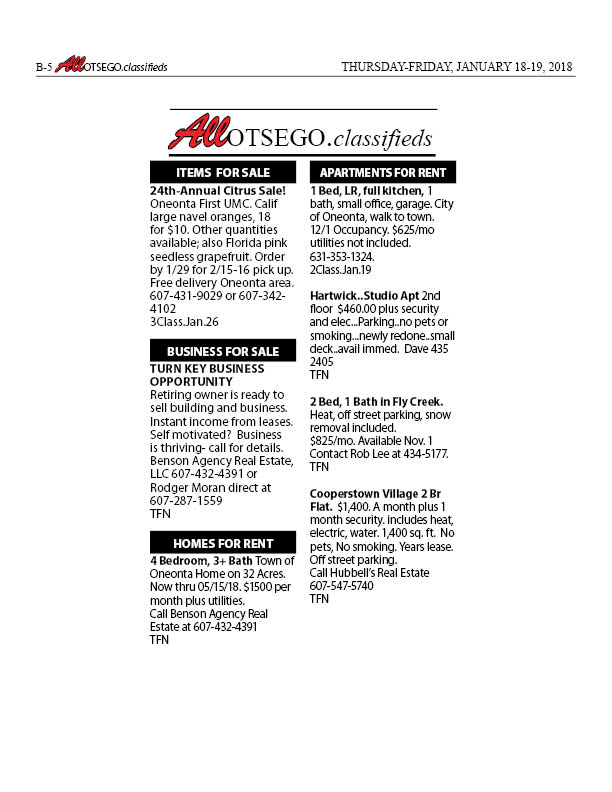