Six feet of distance may not be enough to prevent coronavirus transmission, experts say

Georgia teacher paralyzed after waterslide mishap: 'It just happened in a split second'

COOPERSTOWN – The one-month old Community Foundation for Otsego County has raised $175,000 in donations in its first four weeks of operation from 230 individuals so far.

In the last 10 days, the foundation’s COVID-19 Fund has also made five awards, and now has a total of 17 in review or completed. Completed awards include:

• BASSETT MEDICAL CENTER – $7,500 to distribute gift cards for gas and food to employees who have been furloughed or had hours reduced due to clearing the facility for COVID-related use.

• COOPERSTOWN FOOD PANTRY – $3,000 to buy farmers’ market vouchers to give to families that use food pantries.

In another instance of community support, Alex’s World Bistro dedicated “Well Spent Wednesday” on April 29 to the fund, donated 15 percent the day’s receipts. The Bistro will reprise this in the near future.
In addition, the town boards of Worcester, Cherry Valley and Otsego have passed resolutions supporting the fund, as has the Cooperstown Village Board and Oneonta Common Council.
U.S. Rep. Antonio Delgado, D-19, state Sen. Jim Seward, R-Milford, and Assembly John Salka, R-Brookfield, have also announced support for the fund.

Qualified nonprofit organizations may obtain applications from the foundation website, www.cfotsego.org; donations are also accepted online at the website.

For news updates, check Facebook.com/CFOtsego. Contact the foundation at contact@cfotsego.org.
Contributions are still being sought from individuals, companies, other local foundations and organizations. Online gifts have the most immediate impact and can be accepted at www.cfotsego.org.
Donations can also be sent to the Community Foundation of Otsego County, P.O. Box 55, Springfield Center, NY 13468.

“This award to Helios Care captures the goal of the fund to support first-line health care providers by supplying them with (PPE) they need to safely conduct home visits,” said foundation President Harry Levine. “The Community Foundation of Otsego County is honored to be able to award these funds to Helios Care.”

Helios Care sought the funds for staff to use in caring for palliative and hospice care clients.

“Helios Care providers are serving the most vulnerable members of our community during this national emergency,” said Helios CEO Dan Ayres in thanking the foundation.

Though Helios Care has received the first grant, the Community Foundation is reviewing several more applications from local nonprofits seeking help during the COVID-19 crisis.

Additional recipients are expected to be announced soon.

To apply for a grant or donate to the foundation, go to www.cfotsego.org.

ONEONTA – Nine community organizations, including Helios Care, Opportunities for Otsego and Catholic Charities, have received more than $65,000 in grants from the Community Foundation for South Central New York to help the fight against COVID-19.

“Typically, we support school districts, arts organizations and human services,” said Diane Brown, executive director. “But COVID-19 hit in the middle of our spring grant cycle, so we repurposed our funding.”

END_OF_DOCUMENT_TOKEN_TO_BE_REPLACED

In Healthcare With Helios Care

END_OF_DOCUMENT_TOKEN_TO_BE_REPLACED

Helios To Open Conversation On Care In Time Of COVID-19

On Care In Time Of COVID-19

The online presentation will begin at 2 p.m. To register, click here

“During this challenging time, it becomes even more important to have the conversation to make sure you get the care you want if and when you need it,” said Kelly McGraw, Helios Care director of access.

END_OF_DOCUMENT_TOKEN_TO_BE_REPLACED 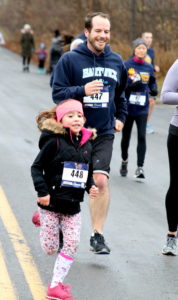 A brisk run on a cold morning is a good way to get ready for Thanksgiving dinner! 477 runners took to the streets for the annual Thanksgiving Day 5K Turkey Trot for Helios Care. Above, Carson Pashley, Austin Hitt, Christopher Mosconi, Noah Artis, Ron Reed, Emma Peeters, Kacie Hymers, Michael Hamilton, Andrew Stanton, Tristan Ethier Matthew Rubin, and Alanmichael Rubin take off from the finish line at the start of the race. At right, Daniel Butterman runs with his daughter Layla to the finish line for a time of 29:30. (Ian Austin/AllOTSEGO.com)

Join Best Of The Best

END_OF_DOCUMENT_TOKEN_TO_BE_REPLACED

‘Man With A Plan’ 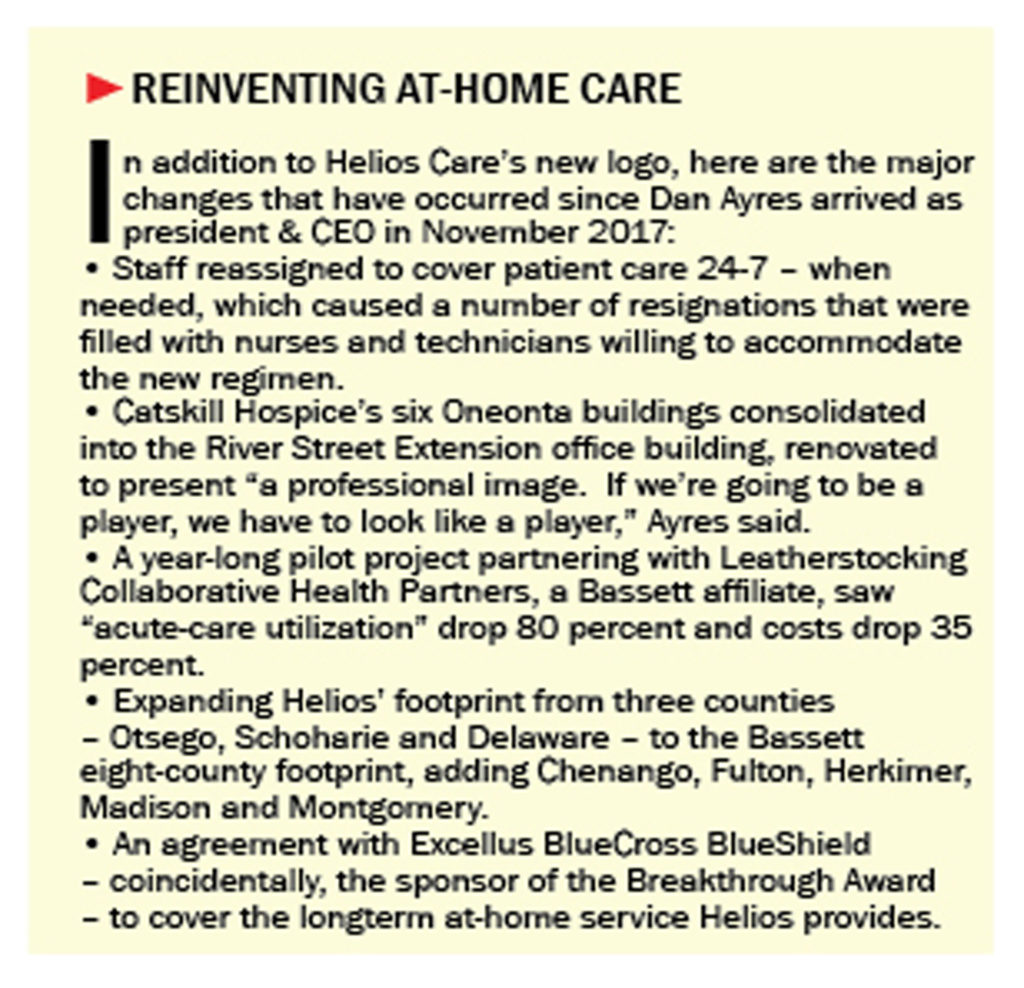 ONEONTA – By 1995, Dan Ayres – “Dan, the man with a plan” – had been vice president/support operations for five years at Fanny Allen Hospital in Winooski, Vt., when the news broke:

The small community hospital was about to be merged into the much larger Mary Fletcher Hospital in adjacent Burlington, and there would only a single high-level job for the Fanny Allen’s half-dozen top executives.

Ayres, now CEO & vice president at Helios Care, the former Catskill Area Hospice & Palliative Care, was the youngest applicant.  He got the job of vice president/facilities services, overseeing the merger of the two hospitals into the Fletcher Allen Medical Center.

The other applicants, he said in a recent interview at Helios consolidated headquarter on the River Street Extension, talked about their experience and credentials. “I had a plan,” Ayres said.  “I had a complete binder – the organization structure, the first 90 days.”

His latest plan – the concept, new name and new logo for Catskill Hospice – was unveiled by the Helios board Tuesday, Oct. 8, before 100 people at a reception at the Southside Quality Inn.

That, plus a nomination by a family member whose father had benefit from Helios new approach – don’t take the patient to the hospital; bring quality care to the patient’s home – will be recognized at the Otsego County Chamber’s Excellus BlueCross BlueShield Breakthrough Business of the Year at the annual Small Business Banquet Thursday, Nov. 21, at The Otesaga.

“Instead of end of life, Helios is about maintaining quality of life,” said chamber President Barbara Ann Heegan.  “We have a pioneer right here in our neighborhood, which I think is fantastic.”

Helios “keeps people in their homes longer,” she continued. “They have access to medical services.  It keeps them out of emergency rooms.  It helps with overall cost – for the patients themselves as well as the organization.”

Helios board chairman Connie Jastremski, retired Bassett chief nursing officer and vice president/patient care services, said she and other board members were aware the term “hospice” had become a barrier to care.

“It isn’t really the end of life,” she said, noting patients were typically entering hospice with only 4-5 days to live. “It’s making your life better at the end.”

Plus, “Catskill” in the name didn’t accurately depict the service area, which includes the Cooperstown area, which is not in the Catskills.

A popular term in renamed hospices is “comfort care,” but the local board discovered it’s trademarked; the rights would have been expensive to buy.

“’Helios Care,’ I think, struck us at first as ‘what?’” Jastremski said.

“Hearing the back story” – reflected in the new logo – “is important,” she said. “Helios, the god of sun, bringing warmth and bright light into your patients’ lifes.  Around the sun are hearts, the people who are caring for them, for the love, caring and compassionate dignity we provide.”

Now, she said, it’s her mission to get doctors to understand the new emphasis, which has required adding personnel to increase the palliative care piece.

Jastremski’s last job at Bassett was in the Pain & Palliative Care Unit, “holding people’s hands and talking to them about relieving their symptoms.”  That’s the Helios goal, to treat patients early and at home, with either nurses or telemedicine.

Since Ayres arrived back in the Otsego-Delaware region in November 2016, change had been systematic.  (See box, this page)

If the new model works for patients, it also works for hospitals, which federal reimbursement rates are now punishing if a patient isn’t fully treated and has to return two or three times, Jastremski said.

“Patients who readmit most frequently come to the emergency room with shortness of breath, heart problems, dementia,” she continued.  “If you can call someone on a 24-hour hotline, we can send a nurse out to see you, or do it by telemedicine.”

COOPERSTOWN – Helios Care and Rustic Ridge Winery will be the honorees at the Otsego Chamber of Commerce’s Small Business Banquet Thursday, Nov. 21, at The Otesaga, chamber President Barbara Ann Heegan announced a few minutes ago.

Helios Care, which recently announced the reinvention of Catskill Area Hospice to provide a wide range of services at home, will receive the Excellus Blue Cross Blue Shield Breakthrough Business of the Year, celebrating innovation and entrepreneurial spirit.

Rustic Ridge Winery, operated by Rick and Laura Bennett on the family farm int the Town of Burlington, will received the Key Bank 20th annual Small Business of the Year Award.