The President's dishonesty is getting worse as Election Day nears. For fact checkers, last weekend was one of the most challenging stretches of Trump's presidency.

Listen to leaked call of Trump bashing Fauci to his staff

Expert issues dire warning about next 6 to 12 weeks

Early voting numbers are breaking records. Here's what we don't know yet

Biden could benefit from the exodus to suburbs

In just a few short weeks, the 51st District will choose its state senator, a position that has been held by Jim Seward for the last 34 years. And Jim Barber is who I want to represent us.

One only need visit Jim Barber’s family farm to know that a person who can keep a farm like this afloat and growing in these economic times is someone who could help our 51st District to do the same.

And like his farm, his well-designed website also reveals a truth about who he is: he clearly lays out his ideas and plans about taxes, the environment, the opioid crisis, the health care system, education, and as you can imagine—small businesses.

Jim’s proposed plans make sense for where we are now. They are realistic ones that would help everyone wherever they lie on the political spectrum. 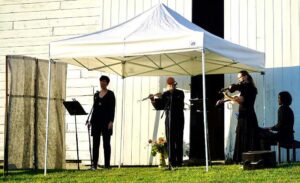 COOPERSTOWN – A five minutes past noon today, 20 friends and relatives helped Mina Aramini up onto the village docks after she swam the entire 9-mile length of Otsego Lake.

Mina, 14, a Cherry Valley-Springfield High School student,   completed her swim in 4 hours and 39 minutes with her mother April paddling alongside in her kayak.

Mina dedicated her accomplishment to the Community Foundation of Otsego County.  She is leaving open her GoFundMe page for any more contributions, but as of the time of her finish, she had raised $2,190 for the foundation.

According to Mina, “The water conditions were perfect.  For the last two miles, I was completely focused on getting to the finish.”

Must Pay Back Model

COOPERSTOWN – Victoria Pressley, the Cherry Valley modeling agent who was charged with fraud after a model claimed Pressly never booked any of the promised shoots, has agreed to pay back the $4,300 fee she charged a client, according to District Attorney John Muehl.

“It was an interesting case,” he said. “But with the courts not yet open, I had to triage it.”

END_OF_DOCUMENT_TOKEN_TO_BE_REPLACED

CHERRY VALLEY – Cited as “hard working” and “determined,” Cherry Valley/Springfield seniors Matthew Mosenson and Luke Loveland have been named the co-valedictorians of the Class of 2020.

Monson, who spent the 2018-19 school year in Lampang, Thailand, is active with the school’s drama and music departments, and participated on the varsity indoor and outdoor track teams for the first time as a senior.

END_OF_DOCUMENT_TOKEN_TO_BE_REPLACED

CHERRY VALLEY – A Cherry Valley woman is in serious but stable condition at Albany Medical Center today after crashing her ATV at 6 p.m. yesterday on Salt Springville Road on the north end of town.

Amber M. Girard, 46, of 282 Swamp Road, was driving the ATV as a “high rate of speed” when she lost control of the vehicle, which rolled over and ejected her near the intersection with County Route 32, according to state troopers at Richfield Springs, who responded.

END_OF_DOCUMENT_TOKEN_TO_BE_REPLACED

CHERRY VALLEY – Albert R. Killmeier, 63, of Cherry Valley passed away on Monday  April 20, 2020, at home with his family at his side after a long battle with Parkinson’s.

Albert worked as a farmer on the family farm for years, and loved being on the farm.

END_OF_DOCUMENT_TOKEN_TO_BE_REPLACED

CHERRY VALLEY – Raised in Cherry Valley, Beverly Jean (Snyder) Leneker, 74, passed peacefully in her sleep Feb. 16, 2020, with her loving and caring husband by her side, after a long battle with dementia.

Beverly was born April 21, 1945, to Lawrence C. Snyder Sr. and Elizabeth M. (Bogardus), and spent her childhood in Cherry Valley.

Beverly married Raymond V. Leneker on July 25, 1964, and moved to Canajoharie to raise a family. Beverly was employed for a short time at Beech-Nut before becoming a long-time employee at Canajoharie National Bank in the mortgage department.

END_OF_DOCUMENT_TOKEN_TO_BE_REPLACED

Not a chair. A toilet seat.

END_OF_DOCUMENT_TOKEN_TO_BE_REPLACED

The original Story Tavern was built in 1790; an addition in the back was added in 1783. William Story, a miller near Tekaharawa Falls, opened his business in 1812, and with its proximity to the turnpike, was a popular place for visitors along the road to stay.

In addition to food and lodging, the building also served as the village court, auction and, according to Hall, a circus set up at the tavern, including a live tiger.

Hall and Lozier bought the house in 2010 from where they had been living in Ulster County. “I wanted an older, historic house,” she said. “When we found this one, it had been abandoned for years. I knew it had been a tavern when I bought it, but I didn’t know the whole history.”

The pine board seats two, each with a wooden seat cover. There were two outhouses at the back of the tavern, one on each side.

Though the two outhouses had to be torn down, Hall insisted the seats be saved. “They’re pine, and in good condition,” she said. “There’s a lot of history in those seats!”

She gave one to Dr. Paula Baker, a friend who teaches history at Ohio State University. “Martin Van Buren is one of her favorites,” she said. “She carried this wooden plank on the bus, and then across campus!”

The other one she kept, cleaned it – and the wooden covers – and placed it atop a Civil War era chest in the upstairs hallway.

But the seats weren’t the only thing she discovered in the outhouse. “The outhouse was often used a trash bin,” she said. “As we kept digging, we found a lot of stuff!”

Among the buried treasures were the front doorknob, a pocket watch, a wooden water spigot, several spoons, metal plaques from the American Radiator and Sperry Stove company, a spinning wheel piece, a Swiss Army knife and buttons from a British military uniform.

“We also found boxes and boxes of pottery,” she said. “Under the floor we found all sorts of coins, and I use them as patterns in my quilts.”

And while they were fixing the house, someone brought them a piece of history that they had found years earlier – a .38 revolver.

CHERRY VALLEY – William Aris Mixon Jr., 81, of Cherry Valley, a high-end retailer in New York City and hotelier in the Bahamas, passed away due to complications from a head injury on Wednesday, Nov. 20, 2019, at Albany Medical Center.

Known familiarly as Aris Mixon, he was born on Jan. 27, 1939, in Cairo, Georgia.
An active, creative man, he attended Florida State University, where he performed trapeze acts with the FSU Circus.

END_OF_DOCUMENT_TOKEN_TO_BE_REPLACED

IN MEMORIAM: Katherine I. Wood, 85

END_OF_DOCUMENT_TOKEN_TO_BE_REPLACED

Longtime CNA At The Meadows

CHERRY VALLEY – Ruth Ellis, 87, a CNA at Otsego County’s Meadows nursing home for many years, passed away peacefully on Jan. 22, 2020.

END_OF_DOCUMENT_TOKEN_TO_BE_REPLACED

Do you support repeal of New York's bail reform law?