Oneonta Gears Up For The Holidays

HOLIDAY PARADE —10 a.m. Come out for some holiday cheer and celebrate Santa’s arrival in the “Home for the Holidays” Parade. Followed by the Mice on Main Scavenger hunt. Main Street Oneonta. (607) 376-7599 or visit destinationoneonta.com/holiday-fun

GINGERBREAD JUBILEE—11 a.m. Community members, organizations, businesses and others create their most creative gingerbread houses on the theme of their favorite board game. Foothills Performing Arts and Civic Center, Oneonta. (607) 376-7599 or visit destinationoneonta.com/holiday-fun

FESTIVAL OF TREES—11 a.m. to 1 p.m. Decorate your own 6-ft. artificial Christmas tree (must include, but not limited to, a garland, lights, tree topper, skirt, and ornaments), sponsor a tree to be decorated on your behalf ($150), and enter to win your favorite tree in the raffle. Come see the holiday creativity on display. Held at the Foothills Performing Arts and Civic Center, Oneonta. (607) 376-7599 or visit destinationoneonta.com/holiday-fun

BE AN ANGEL – The community is invited to adopt a family and then find Christmas gifts for each of the children listed. Gifts are due unwrapped and without tags to either the office of The Freeman’s Journal at 21 Railroad Ave. in Cooperstown, or at the Salvation Army Church at 25 River St. in Oneonta. Visit allotsego.com/angel-tree-program/ for details

END_OF_DOCUMENT_TOKEN_TO_BE_REPLACED

Oneonta ‘Festival’ and county ‘trail’ light up the holiday season

Oneonta ‘Festival’ and county ‘trail’ light up the holiday season

The Christmas season is officially here, which means holiday music, gathering with family, opening gifts, and waiting for Santa Claus.

But there is nothing that screams holiday spirit more than what the Leatherstocking Education on Alcoholism/Addictions Foundation (LEAF) is doing to draw attention to the great light displays local residents proudly show off in Otsego County.

And it’s all for a good cause: LEAF created the ‘Great Otsego Holiday Light Trail” three years ago as a safe way to promote sober driving. END_OF_DOCUMENT_TOKEN_TO_BE_REPLACED

The annual holiday Adorn-A-Door Wreath Festival is on!

Annual Adorn-A-Door
Wreath Festival is on!

END_OF_DOCUMENT_TOKEN_TO_BE_REPLACED

SANTA ARRIVES – 5 p.m. Bring the friends and kids to greet Santa as he arrives at his cottage. Refreshments and music will be available. Please wear a mask to visit Santa’s cottage. Pioneer Park, Cooperstown.

END_OF_DOCUMENT_TOKEN_TO_BE_REPLACED

The Farmers’ Museum brings ‘lantern tours’ back for another December

The Farmers’ Museum brings ‘lantern tours’ back for another December

By Ted Potrikus • Special to www.AllOTSEGO.com

Holiday Lantern Tours return this December to The Farmers’ Museum — evening events guiding visitors through museum grounds by lantern light with talks on the history of December holidays, including Christmas, and how they were celebrated in Upstate New York in years past.

Deb Anderson, Museum interpreter and assistant to the director of education, said the hour-long tours “give visitors a real picture of what people in this part of New York State would do to celebrate the season every December.”

“In the 1840s, Christmas celebrations specifically were just coming into vogue,” she said. “We walk people through the traditional Yule and Winter Solstice of the era, the first Christmas card, the music, the introduction of the Christmas tree. We try to touch on all of the things that made the festivities of December so special in our region.” END_OF_DOCUMENT_TOKEN_TO_BE_REPLACED

Yes, there are more families in need of Christmas cheer. But Salvation Army Capt. Selah Bender can report, there are many more angels to help make
the season merry.

Take the Angel Tree program, where shoppers can pluck a tag off a tree with the name of a child in need of a Christmas present.

“We’ve had entire Angel Trees emptied almost as soon as we put them up,” Bender said. “We’ve had to go out and put more tags on them. We’ve had some really inspirational donors this year.”

The captain and her husband, David, six-year veterans of the Salvation Army, arrived in Oneonta in August from northern Kentucky in the midst of the COVID-19 threat, and had to adjust.

“Kettles have been a challenge since day one,” she said. “We weren’t sure we were going to be able to do them, but finally, the grocery stores all said yes.”

Getting volunteers also proved difficult, so Selah has put the form on www.salvationarmy.org. “You can register for an hour or two, or if you’re a group, sign up for the whole day,” she said.

Volunteers have to wear a mask, have no COVID symptoms and step back when people drop money in the kettle, she said.

Some familiar faces have been recruited, including Nick Whitehead, who mans sites around Oneonta. But for those who looked forward to hearing him sing while he rings, new regulations have shushed him this season.

In addition to throwing in your spare change, each kettle is outfitted with scan-code so you can make a donation directly using Google or Apple Pay. “It looks up your zip code and donates to the local Salvation Army.”

At Walmart, shoppers also have the option of rounding up their spare change at the checkout. “That’s great for people who are doing the curbside pickup,” she said. “We’ve had a lot of help this year.”

And with the abundance from the Angel Tree, families will still be able to collect toys for their children, but instead of in one large gathering, families will sign up for a time to pick up their gifts, and they will be loaded into the car.

Similarly, the annual holiday food baskets are being discontinued. “Our volunteers are so limited, and we don’t have the college students to help sort,” she said. “It was a hard decision to make.”

But the captain sees this as a blessing in disguise. “We’re directing the people who normally get a holiday basket to our food pantry,” she said. “It’s more of a bridge than just seeing them on one day, we can continue having conversations about their needs, and they have access to the food pantry more long-term.”

And they still have both frozen turkeys and store vouchers for turkeys for anyone who might need the centerpiece of their holiday meal.

Families can sign up online, and, like the toy distribution, food distributions are by drive-up only, by appointment.

“Anyone who needs food can get food,” she said.

END_OF_DOCUMENT_TOKEN_TO_BE_REPLACED 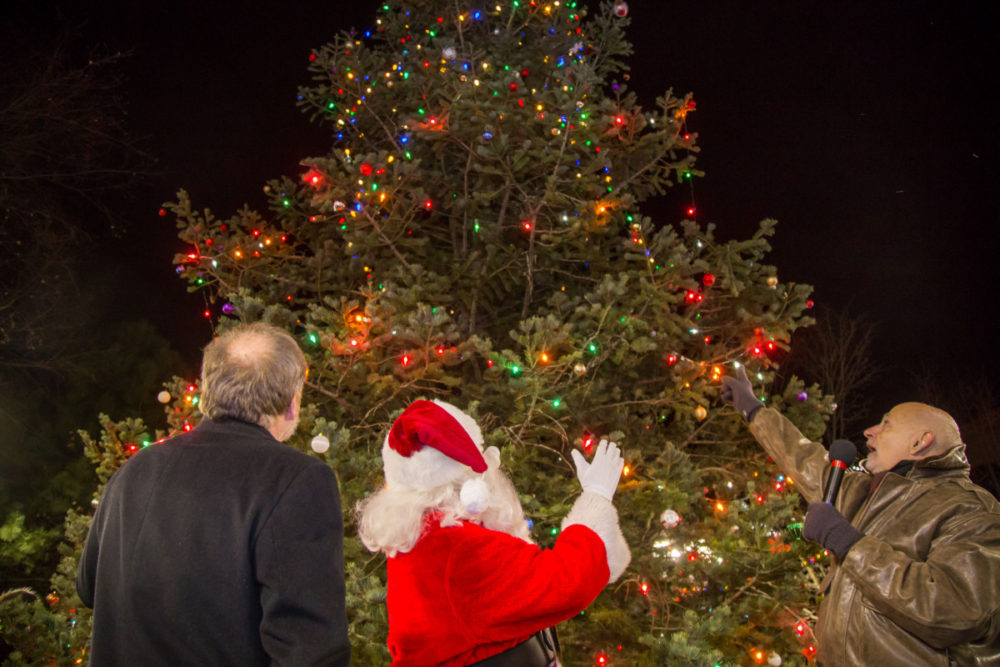 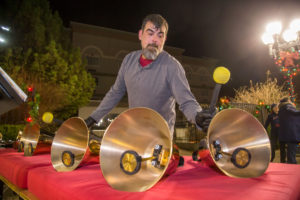 With Oneonta Town Supervisor Bob Wood to his left, and Oneonta Mayor Gary Herzig to his right, Santa Claus admires the City of Oneonta’s Christmas Tree just after it was lit this evening in Muller Plaza.  As if scripted in a movie, snow began to fall just as the tree’s lights came on for the very first time.  Christopher Brashear, pictured at right, and the Klipnocky Clangers handbell choir played holiday tunes to help get everyone in the holiday spirit.  After the lighting, Santa occupied his cottage and began hearing youngsters’ Christmas wishes.  (Parker Fish/AllOTSEGO.com)

Check back at 5 p.m. for tomorrow’s events.

FUNDRAISER – 7 p.m. Live music will be performed. The public may donate for the opportunity to perform. Donations go to the Cooperstown Lion’s Club fund to support area residents to lessen financial stress. Mel’s at 22, Cooperstown. Info, www.facebook.com/Melsat22/

END_OF_DOCUMENT_TOKEN_TO_BE_REPLACED

Holiday Cheer By The Bus Load