Phyllis grew up in Otego and graduated from Otego Central School in 1945. She attended Rochester Institute of Technology, majoring in interior design.

END_OF_DOCUMENT_TOKEN_TO_BE_REPLACED

Who ‘Threatened’ Mayor On Billboard

MILFORD – The Village Board has asked the Town Board to “take…into consideration” the reappointment of two town Planning Board members after a dispute over the “Trump 2024” billboard north of the village on Route 28.

The village officials “express our concerns with the actions of Town
Planning Board Members, Bruce Milavec (Chair) and Gary Wickham and their covert efforts to ‘threaten’ the Village Board with fines over the ‘Trump’ billboard.”

END_OF_DOCUMENT_TOKEN_TO_BE_REPLACED

CONTRACT RUNS OUT IN APRIL

Help May Be On The Way

MILFORD – For the portion of the public upset by the “Trump 2024” sign on Route 28 north of the Village of Milford, help may be on the way.

Anna Johnson, Rome Sign Co. business manager, said the billboard’s current renter has a contract that runs out in April, and a new customer has picked up the contract, so “Trump 2024” may be gone by the end of that month, “depending on the weather.”

END_OF_DOCUMENT_TOKEN_TO_BE_REPLACED

Shirley U. Banner, Milford, 87; Dies Of COVID In Nursing Home

Dies Of COVID In Nursing Home

Born July 12, 1933, at the home of her grandmother, Maude Bliss, in Milford Center, Shirley was the oldest of five children of John W. and Bernice M. (Bliss) Utter.

Shirley attended a one-room schoolhouse in Milford Center and Milford Central School where she graduated with the Class of 1951. After graduation she worked at the Scintilla Plant in Sidney.

END_OF_DOCUMENT_TOKEN_TO_BE_REPLACED 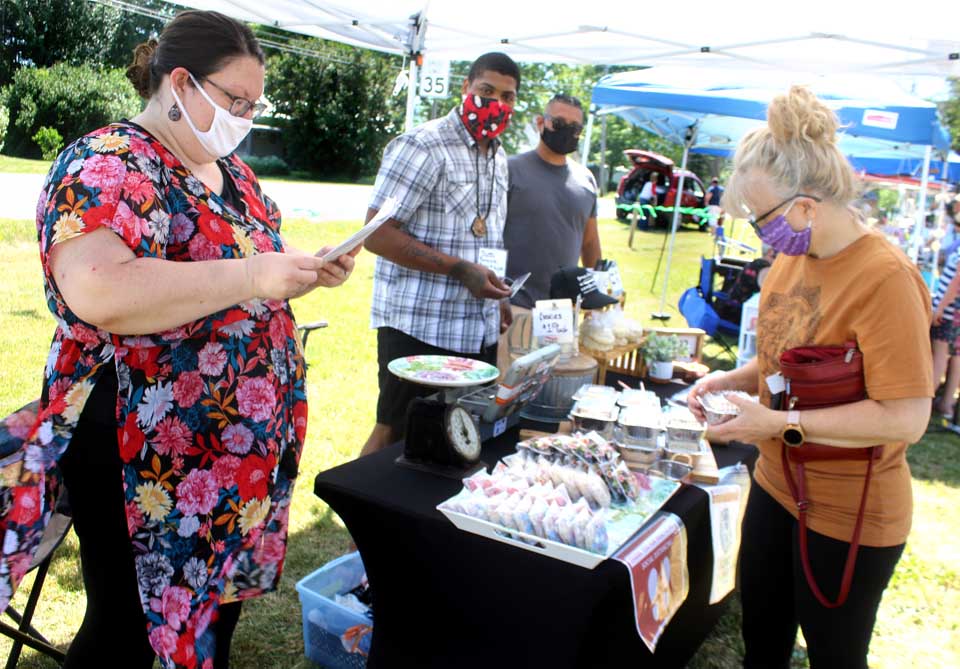 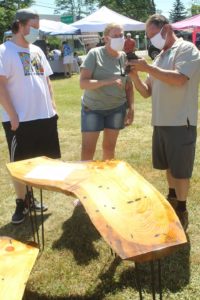 This summer, don’t forget the OTHER farmers’ market – Milford’s, from 10 to 2 each Sunday  off Route 28 at the north end of the village. Today, Kelly Morrissey, Goodyear Lake, at right in top photo, expresses satisfaction at the gluten-free cookies offered by Becca Hopkins, left, and her husband Vince, of Worcester. (Friend Oscar Carpenter, right, is visiting from the Albany area.) Morrissey recommends the Whoopie Pies and Raspberry Crunch varieties. Inset, right, Ralph Morse of Cooperstown Maple Works, discusses tables he’s been making, that follow the natural contours of wood trucks, with Elizabeth Matter of Milford and son Justin. Now in its third season, Manager Sabine Curry (the former village mayor) said the market has grown steadily, and with a couple of more vendors, the layout will have to be expanded from two to three rows. (Jim Kevlin/AllOTSEGO.com)

MILFORD – Three years ago, shortly after the Milford Methodist Church burned down, two members of the congregation, Al Bullard and Bill Triolo, were standing across Route 28 watching a crew of Peruvians from Rohlf’s Stained & Leaded Glass, Mount Vernon, removed “Christ in Gethsemane” and other windows from the ruins.

As Bullard remembers it, Triolo, now chairman of church trustees, suggested, “Let’s go over and ask them for help.”

“I’m sorry we didn’t get the communion rail,” he added.

The church furnishings ended up in Bullard’s garage on Eddie Martin Road, except for the pulpit, which organist Ron Johnson stored in his garage in Pierstown, and is now in the Milford Community Center on East Main Street.

“The wood was alright,” said Bullard, an antiques and hops expert who is also pastor at the Colliersville and Emmons Methodist churches, “but it was black from soot and water damage.”

He added, “You can’t go wrong with quarter-sawn oak of the finest quality.”

By the time the new church opened last summer, Bullard – assisted by David Elliott, Milford – had restored the Communion table, inscribed across the front with “Do This In Memory Of Me.”

This past Sunday, however, when church members tuned into Pastor Sylvia Barrett’s 10 a.m. service on YouTube, which has become a staple since the coronavirus threat required in-person Sunday services to be cancelled, they were greeted by a surprise.

The Baptismal font and flower stands were back in place.  (The pulpit, considered out of scale in the smaller church, may be restored and displayed as an artifact in the new lobby.)

Among delighted church members was Becky Mattison, Oneonta, who had been alerted the day before by her daughter, Emily Mattison-Welsh.  Both Emily, now 37, and son Shawn, 41, were baptized at the font.

The mother called it “an old friend.”

Bullard has been refinishing furniture since a teenager in the Philadelphia suburb of Morton, Pa., where his father was an antiques dealer.  “I like bringing things back,” he said.

The bowl is Depression glass, created between 1930 and 1939 by the Jeannette Glass Co. in western Pennsylvania.  In the space beneath the bowl, Bullard found instructions on how to space the pews in the old church.

He scrutinized the brass plaque on the blond wood: It was donated by the pastor at the time, the Rev. Robert E. Austin, and his wife.

Looking at records back at the parsonage, Pastor Sylvia discovered another surprise: Rev. Austin was pastor in 1929, when an earlier church had also burned down.

He donated the Baptismal font at the ceremony dedication the new church in March 1930, 87 years before the replacement church burned.

Bullard has a personal connection to artifacts salvaged from the 2017 fire: One of the smaller restored windows behind the Communion table was dedicated to Grace Martin, a relative of his wife Sandra.

Raised a Presbyterian, he came to Otsego County in 1966 to attend the Cooperstown Graduate Program in Museum studies, met his future wife and stayed, becoming a Methodist.

“It’s nice to have something from the old church in the new church,” he said.  “For continuity.” 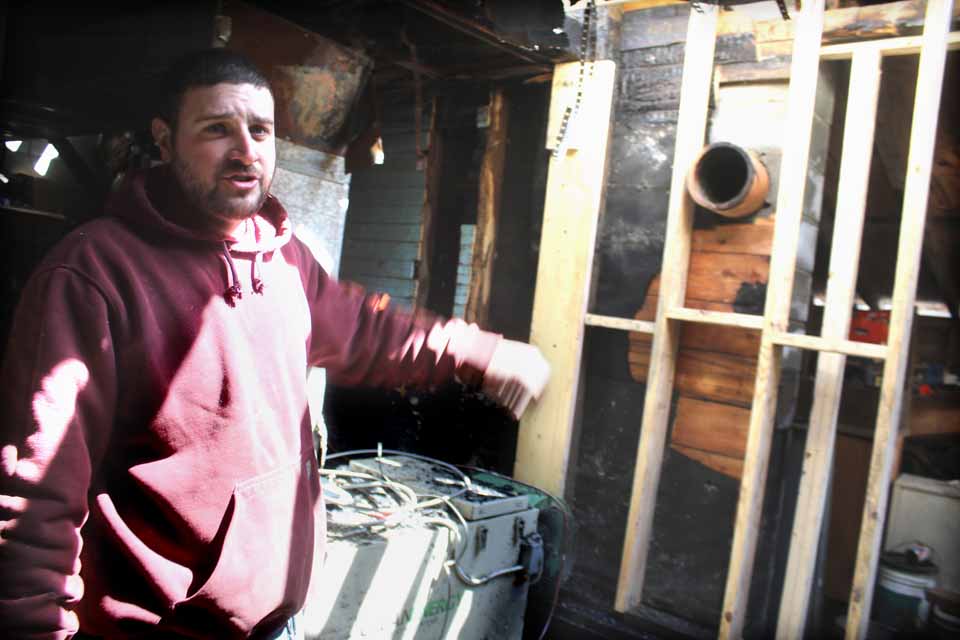 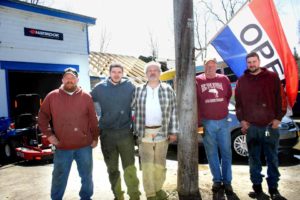 Drive by Neighbour’s Service Center on Route 28, Village of Milford, anytime today, and you’ll see a crew of family and friends working on getting  Antonino Triarsi’s business back in business.  In top photo, Triarsi points out where the attachment from the oil heater, at left, slipped out of the pottery chimney pipe, in wall at right, and set the wall on fire.  With Milford, Cooperstown and other fire departments responding, Saturday’s fire was largely confined to the furnace room.  The front office needs some cleanup, but that’s about it.  Triarsi, 32, a Bloomville native who’s been running the repair shop since February 2019, expects to be open again in the next couple of days.  In addition to cars, he repairs lawnmowers, tractors, you name it, and is already taking reservations (at 607-441-8044). Helping with repairs, inset photo, are, from left, friend Jodie Currie Jr., brother Emanuele Triarsi, dad Antonino Jr., and Fred Waters, who’s been associated with the building since the 1960s, when he began working for Art Kiser.  The owner is at right.  (Click image for full size.)  In the background, you can see the framing of the new roof, in place by noon today.  (Jim Kevlin/AllOTSEGO.com)

MILFORD – State Sen. Jim Seward, R-Milford, may be back in his Milford home by today’s end.

His wife, Cindy, posted this afternoon on the Milford Community Facebook page: “I am on my way to pick Jim up!! And he does not require oxygen!!”

The senator came down with the coranavirus in late March and has been in Albany Medical Center for the past two weeks, the last week recuperating from treatment on a ventilator in the hospital’s ICU unit.

END_OF_DOCUMENT_TOKEN_TO_BE_REPLACED

But ‘Next Few Days Crucial’

MILFORD – “The next few days are crucial” for state Sen. Jim Seward, R-Milford, who has “slightly improved” since being placed in a medically induced coma Thursday morning at Albany Medical Center, his wife Cindy told the Milford community in a Facebook post this afternoon.

She said the briefing was prompted by “all of our friends in our Milford community who have reached out with care, concern, and love, (about) my husband’s and my status.”

END_OF_DOCUMENT_TOKEN_TO_BE_REPLACED

COOPERSTOWN – When  computer behemoth IBM issued an internationally distributed press release yesterday on its “Watson Assistant For Citizens” tool for ensuring citizens get the information they need during the coronavirus threat, it listed Otsego County among its pioneering customers.

“The AI solution from IBM will be a great resource for the county’s residents and will help alleviate call-center volume to allow county employees to dedicate efforts elsewhere,” IBM quoted Brian Pokorny, the county’s director of Information Technology, as saying.

END_OF_DOCUMENT_TOKEN_TO_BE_REPLACED

Lola Rathbone, Otesaga Will Be Honored At 20th Epicurean Fest

Lola Rathbone, Otesaga Will Be

The event is open to the public and will benefit nonprofit Helios Care, the leading provider in palliative and hospice care and grief counseling locally.

END_OF_DOCUMENT_TOKEN_TO_BE_REPLACED 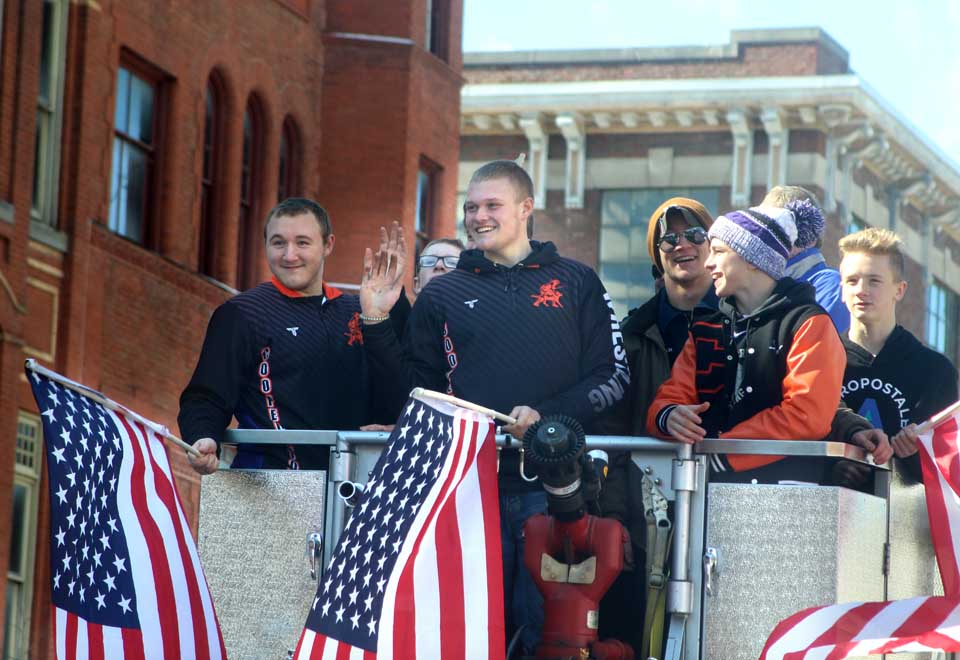 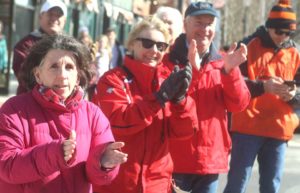 By Pin, Leonard Advances To 2nd Round For NY Title

To 2nd Round For NY Title

Born Oct. 6, 1934, she was the daughter of Lloyd and Lillian (Moffatt) Berner. She was raised on the family farm on Berner Hill Road. She attended Milford Central School, having graduated in the Class of 1952.  As a young girl she participated in Girl Scouts and was a proud Milford High School cheerleader.